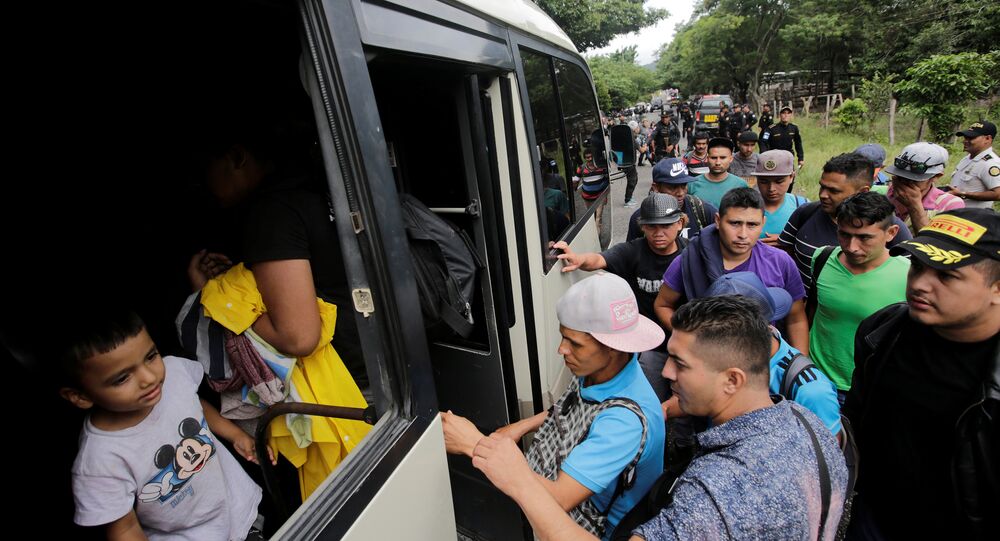 Hernandez said on Twitter on Friday that he is willing to send civil protection agents to help Hondurans in Guatemala and was seeking transport for those wishing to return home.

Central American migrants formed the caravan in Honduras last week, moving towards the southern borders of Mexico by Friday. They tried to push their way through Guatemalan border posts, violently shaking border fences, while others tried to cross the border by river. However, the caravan wa soon stopped by dozens of Mexican police officers in riot gear.

Manelich Castilla, the head of Mexico’s federal police, ensured that his officers had restored order after the push of migrants toward the border, and would begin allowing people to be processed in an orderly fashion.

© Sputnik / Sergey Guneev
Trump Thanks Mexico for Deterring Migrant Caravan
Speaking in Scottsdale, Arizona at a Republican Party rally before the November midterm elections, Trump said he “appreciated very much” Mexico’s efforts to stop the caravan on their borders.

Earlier, Mexican Foreign Minister Luis Videgaray and US Secretary of State Mike Pompeo met in Mexico City and discussed the situation with Central American migrants, noting that “It’s a challenge that Mexico is facing.” Videgaray also said the caravan had close to 4,000 people and that the migrants could individually present their claims to enter Mexico or seek refugee status.

The Mexican government has previously stated that migrants without a legitimate case to claim refuge in the country will be returned to their countries of origin. A Mexican official, speaking on condition of anonymity, said the country has the capacity to process only 200 people a day.