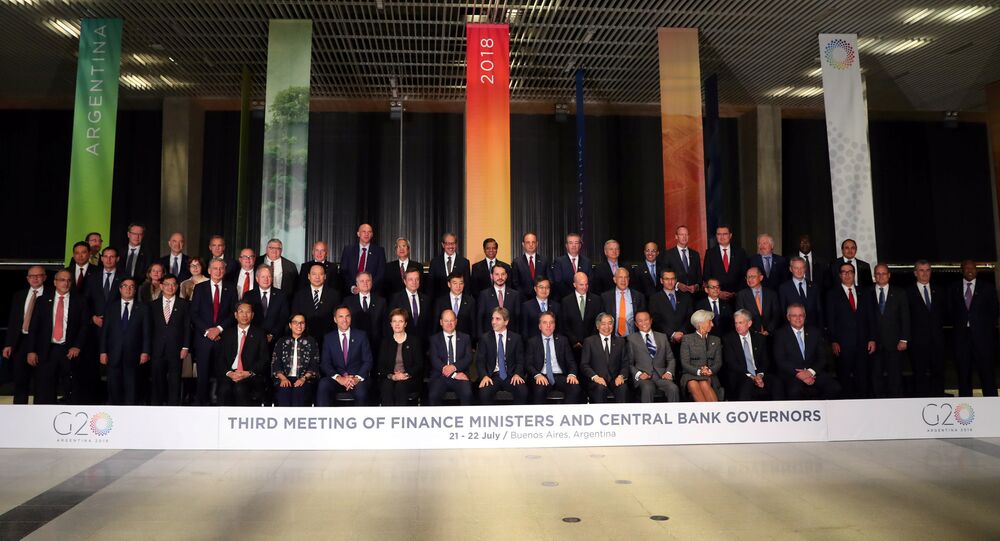 Global trade tensions are high and threaten to escalate further, placing the multilateral system under significant pressure, the EU’s economic and financial affairs chief has warned.

At their two-day G20 meeting in Argentina, global finance leaders have called to step up dialogue to prevent trade and geopolitical tensions from hampering economic growth, but failed to find a clue to resolving disputes over US tariff actions, Reuters reported from Buenos Aires.

“The meeting has not been tense and we were in mutual listening mode and I hope that this is the beginning of something. But still the positions are not similar,” European Commissioner for Economic and Financial Affairs Pierre Moscovici said on Sunday.

The finance ministers’ meeting in Buenos Aires came amid escalating rhetoric in the trade conflict between the United States and China, who have slapped $34 billion worth of tariffs on each other’s goods.

© AFP 2021 / FRED DUFOUR
G20 Finance Ministers Warn of 'Heightened Trade and Geopolitical Tensions'
Adding to Washington’s mounting tensions with China, President Donald Trump threatened on Friday to levy taxes on the entire $500 billion in Chinese exports to the US if Beijing fails to agree to major structural changes to its technology transfer, industrial subsidy and joint venture policies.

In another sign of bilateral tensions, US Treasury Secretary Steven Mnuchin said on Sunday that he had had no substantive discussions on trade with his Chinese counterpart and focused instead on trade relationships with the European Union, Canada, Mexico and Japan.

He added that the US would discuss the elimination of tariffs, non-tariff barriers and subsidies during next week’s trade talks with European Commission President Jean-Claude Juncker in Washington.

For their part, Mexican and Canadian finance ministers held out hope that an agreement to modernize the trilateral North American Free Trade Agreement (NAFTA) could be reached in the near future.

President Donald Trump’s recent decision to levy tariffs of 25 percent on on steel and 10 percent on aluminum, has drawn strong criticism from the EU and Canada who retaliated by  slapping tariffs on a wide range of US goods.

Unhappy with the 10-percent tariffs on imported US cars in Europe and Japan, President Trump is also mulling a 25-percent levy on auto imports.