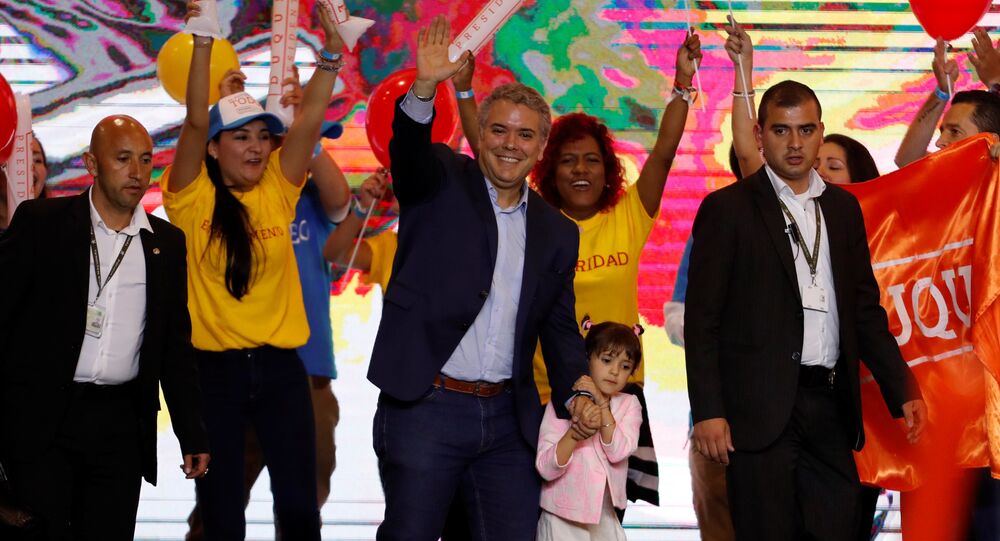 Nobody for President: No Colombian Candidate Wins in First Election Round

MEXICO CITY (Sputnik) – While right wing Colombian candidate Ivan Duque saw 39.30 percent of the vote in the first round of the presidential election, leftist Gustavo Petro received 25.02 percent, and both will take part in a second round of voting, the National Electoral Council stated.

The council issued its results Sunday after counting 91.68 percent of the ballots. if no candidate gets 50 percent, a second round in the presidential election will take place June 17.

Colombia held its first election since a peace agreement was signed with the Revolutionary Armed Forces of Colombia (FARC) in 2016.

© AFP 2020 / Raul Arboleda
Colombia's FARC Party Suspends Election Campaign Over Violent Protests
Ivan Duque, 41, has vowed to toughen the terms of the peace accord and to charge former rebels for war crimes. Gustavo Petro, 58, has sparked excitement with pledgest o revise the country's economic policies and redistribute wealth from the rich to the poor.

The region has long suffered from the activities of US-supported Colombian rebel groups. In 2016, the government of Colombian President Juan Manuel Santos hammered out a peace deal with FARC, transforming the militant group into a political party the following year. Around 1,200 former FARC insurgents are believed to have joined drug-trafficking factions, including the Oliver Sinisterra Front.

Some areas abandoned by FARC saw a brief increase in violence due to the internecine skirmishes between local criminal gangs and remaining guerrilla groups, while the National Liberation Army (ELN)  reported illegal mining and drug trafficking.

© AFP 2020 / LUIS ROBAYO
Santos: Colombia to Become First NATO Global Partner in Latin America
The ELN, the second largest guerrilla group in the country after FARC, is estimated to have several thousand fighters and has been engaged in an armed confrontation with the country's authorities since 1964. In February 2017, the group also entered into peace talks with the Colombian government.

According to Reuters, it was the fist time in Colombia's modern history that a leftist candidate has reached the second round of a presidential election.

Results of Probe Into 2016 Plane Crash in Colombia Revealed - Reports