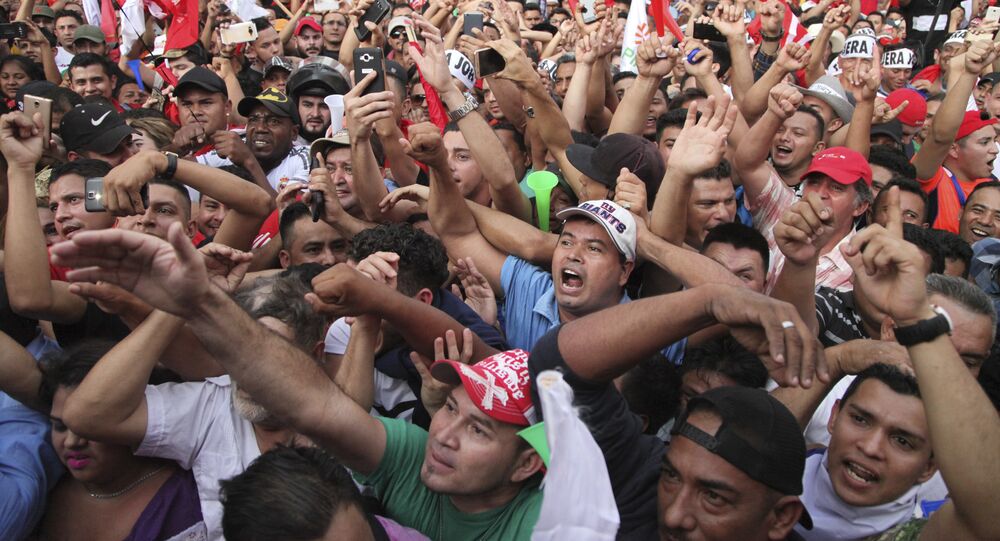 'JOH Out': Thousands of Protesters Demand Resignation of Honduras President

During a massive protest rally in Honduras' second-largest city of San Pedro Sula, demonstrators demanded that the country's opposition leader Salvador Nasralla be recognized as the real winner of November's presidential elections.

Thousands of people have taken to the street in Honduras' second-largest city of San Pedro Sula to say no to the re-election of the country' President Juan Orlando Hernandez.

Referring to Hernandez' initials, protesters chanted the slogan "JOH, out is where you are headed." Many of them were carrying banners which read "Electoral fraud shall not stand," "No more political killings," and "Freedom for political prisoners."

They called for Honduras' opposition leader Salvador Nasralla to be recognized as the real winner of the 2017 presidential elections.

*** Tens of thousands of people in #Honduras have staged a protest rally in the country’s second-largest city against the re-election of incumbent President Juan Orlando Hernandez, whose victory is beset by vote fraud allegations. pic.twitter.com/tnO28w9Jbb

Nasralla, in turn, was quoted by the AP news agency as saying that the protest rallies will continue until Hernandez steps down.

"The people are not going to put up with this imposition, so that the dictator can stay on. We're not going to stop until we get the corrupt out of power," he emphasized.

Protest underway in San Pedro Sula rejecting JOH’s win in Honduras election. Salvador Nasralla is there in the march. Opposition has called for ongoing mobilization beginning today and national strike in week before inauguration. Check out the live feed: https://t.co/2C1wSQW6Ln pic.twitter.com/L3GOrhOs1V

In mid-December, the Supreme Electoral Tribunal (TSE) of Honduras announced the reelection of Hernandez as the country's president after a three-week ballot count.

© REUTERS / Jorge Cabrera
Opposition candidate Salvador Nasralla delivers a speech to his supporters during a march to protest against the results of Honduras' general elections in San Pedro Sula, Honduras January 6, 2018

In December, at least 17 people were killed in street protests in Honduras after the opposition declined to recognize the results of the November 26 presidential elections in the country.

© REUTERS / Jorge Cabrera
A supporter of the opposition candidate Salvador Nasralla stands in front of the Honduras' flag as he takes part in a march to protest against the results of Honduras' general elections in San Pedro Sula, Honduras January 6, 2018

Opposition activists insisted on a complete recount of what they slammed as a fraudulent vote, or even a second round of voting. However, this is not provided for in the country's constitution.