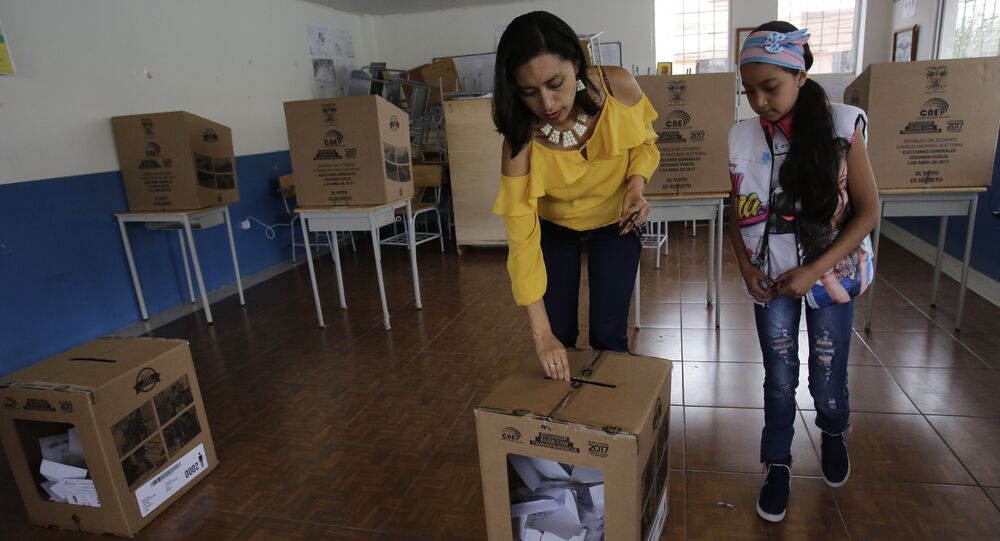 The country’s Electoral National Council said that a recount of votes from the second round of presidential elections has started in Ecuador, after the opposition's allegations of fraud.

MEXICO CITY (Sputnik) – A recount of votes from the second round of presidential elections has started in Ecuador, after the opposition's allegations of fraud, the country’s Electoral National Council (CNE) announced.

"The vote recount is being done in the presence of delegates from political organizations," CNE said on its official Twitter page on Friday.

According to the electoral council, there have been objections to voting results in the provinces of Pichincha, Cotopaxi, Chimborazo, Imbabura and Carchi.

The second round of Ecuador's presidential elections was held on April 2.

© AP Photo / Dolores Ochoa
Ecuador’s Opposition Presidential Candidate Insists on Recount After Loss
With over 99 percent of the votes processed, Lenin Moreno, a candidate from Ecuador’s ruling PAIS Alliance, gained over 51 percent of the votes, while candidate from Ecuador's opposition Creo-Suma alliance Guillermo Lasso trailed behind with 48.85 percent.

Lasso called for a vote recount earlier this week, claiming that the second round was fraudulent and challenging hundreds of allegedly faulty electoral rolls.

PAIS announced on Wednesday that it would welcome a vote recount to demonstrate to the public that the election was fair.