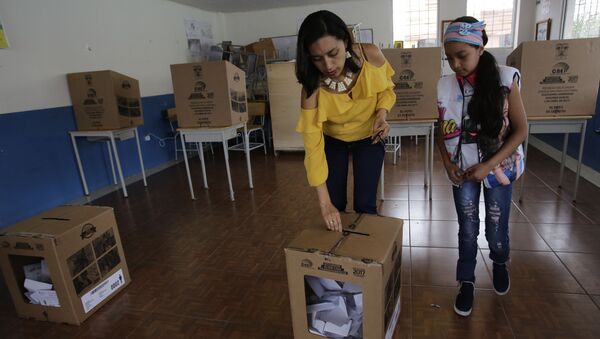 Moreno Wins Ecuador Presidential Election After 99% of Votes Counted
MEXICO CITY (Sputnik) – Presidential candidate from Ecuador's opposition Creo-Suma alliance Guillermo Lasso, who lost to his rival Lenin Moreno in the second round of the elections, is calling for a vote recount.

"We have a mountain of documents," Lasso told reporters on Wednesday, as quoted by the TeleSUR broadcaster, referring to evidence of alleged election fraud. He demanded a "vote by vote" recount, challenging hundreds of allegedly faulty electoral rolls.

The second round of Ecuador's presidential elections was held on Sunday.

The preliminary results of the voting have provoked clashes between Ecuador’s opposition and police near the National Electoral Council’s building in the capital, Quito.