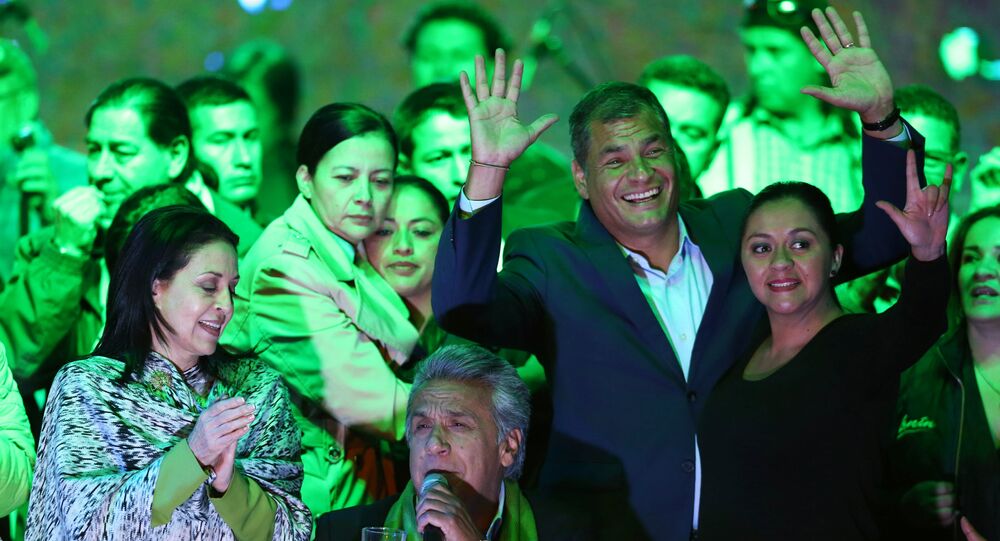 President of Ecuador Rafael Correa couldn't hide his jubilation after hearing the news that ruling PAIS Alliance candidate Lenin Moreno had defeated opposition CREO movement candidate Guillermo Lasso in Sunday's tense presidential runoff. The opposition has taken to the streets in protest, leading to fears of a color revolution scenario in Quito.

Having processed over 98% of the votes from Sunday's vote, Ecuador's National Electoral Council reported that former Vice President Lenin Moreno is leading over right-wing contender Guillermo Lasso by a margin of 51% to 49%, following a close and highly contentious runoff race.

© REUTERS / Mariana Bazo
Leftist Candidate Moreno Triumphs in Ecuador Presidential Election
After hearing the preliminary results late on Sunday night, serving President Rafael Correa jubilantly reacted that this was "great news" not just for his country, but for Latin America as a whole.

"This is great news for the Patria Grande [a concept of a shared community for Spanish America]: the Revolution has returned to victory in Ecuador. The right has been defeated, in spite of their millions and the media," Correa tweeted.

"Lenin is president!!!" he added in a second tweet, pointing to the two point difference between the candidates. "The moral fraud of the right wing won't go unpunished," he added.

The president has reason to celebrate. Sunday's win means that Correa, who will complete his term next month, will be able to pass on the political and economic course he launched in the mid-2000s, when a coalition of left-wing parties led by Correa came to power and began the so-called 'Citizens' Revolution', aimed at building socialism in Ecuador.

© AP Photo / Dolores Ochoa
Ecuador Presidential Elections 'Triumph of Democracy' - Foreign Minister
Moreno, Correa's successor, served as his vice president from 2007-2013. In 2012, he was nominated for the Nobel Peace Prize for his activism promoting the rights of the disabled. Moreno, 64, has been confined to a wheelchair since 1998, after being shot in a robbery gone wrong. During the campaign, the candidate promised to focus on reducing poverty, to promote Latin American integration, initiatives dedicated to the rights of the disabled, and the creation of 250,000 new jobs during his four year term.

By contrast, Lasso, a former banker, had effectively promised to abolish the country's leftist course, vowing to cut taxes, cut spending, and promote foreign investment, and to create a million jobs in four years. He also promised to kick WikiLeaks founder Julian Assange out of the Ecuador's Embassy in London, where the activist has taken refuge since 2012 amid fears of extradition to Sweden or the US on trumped up charges of sexual abuse.

© AFP 2021 / JOSE JORDAN
Clashes Erupt in Ecuador After Presidential Election – President Correa
Sunday's result was the culmination of a highly contentious election campaign, including protests and accusations of fraud by Lasso and his allies. The opposition had voiced their suspicions of possible fraud after the first round of voting in February, and used their control of much of the media to spread suspicions among the electorate. On Sunday night, Lasso challenged the election results, and demanded a complete recount across the country's 24 provinces. The opposition would "continue the fight," the politician stressed.

After hearing of Moreno's victory, protests and violence broke out in several cities, including outside the National Electoral Council building in the Ecuadorian capital of Quito, where police clashed with protesters.

Correa rushed to accuse the opposition of trying "to achieve through violence what they have not achieved in elections." Government supporters, including the president and president-elect, gathered their own supporters, singing patriotic and revolutionary songs including the famous Chilean left-wing hymns Venceremos ('We will win') and El pueblo unido jamas sera vencido ('The people united will never be defeated').

Speaking to RIA Novosti about the election results and the tense situation in the country, Lyudmila Okuneva, Latin America expert and professor at the Moscow State Institute of International Relations, said that the opposition's demands for a recount could have been predicted, given the close margin in the vote. At the same time, she stressed that at this point there is no actually proof of voter fraud.

The election results demonstrate the country's political split, Okuneva said, although she doesn't expect the protests to escalate into anything more serious.

Dr. Lazar Heifetz, Latin America expert and professor at St. Petersburg State University's faculty of international relations, warned that the country is facing a very tense situation at the moment, and it remains to be seen how the situation will unfold in the days to come.

"The numbers are very close. The margin is very thin," the expert noted, speaking to Russia's Vzglad newspaper. "It's natural that the opposition, which…had invested a great deal of money, used its media resources, and still lost, found the result upsetting. In many Latin American countries, it has become characteristic for half of the country to support the authorities, and the other half the opposition." Heifetz classified the situation as 'very strained'.

© Sputnik / Alex MacNaughton
Judgment Day: Ecuador Presidential Election to Determine Julian Assange's Fate
Heifetz also emphasized that while Lasso may demand a recount, there are no guarantees that the electoral commission or judicial authorities will approve it.

In any case, the expert emphasized that the outcome of Sunday's vote was important for Latin America as a whole.

"Ecuador is one of the few countries of the so-called leftward turn [of the 2000s] where this left turn has been preserved," he said. In Brazil and Argentina, Heifetz recalled, the Left were recently ousted, in elections in Argentina's case, or following the left-leaning president's impeachment in Brazil's. Ecuador, Heifetz said, has shown that some of the potency of the Latin American left turn of the 2000s has survived.