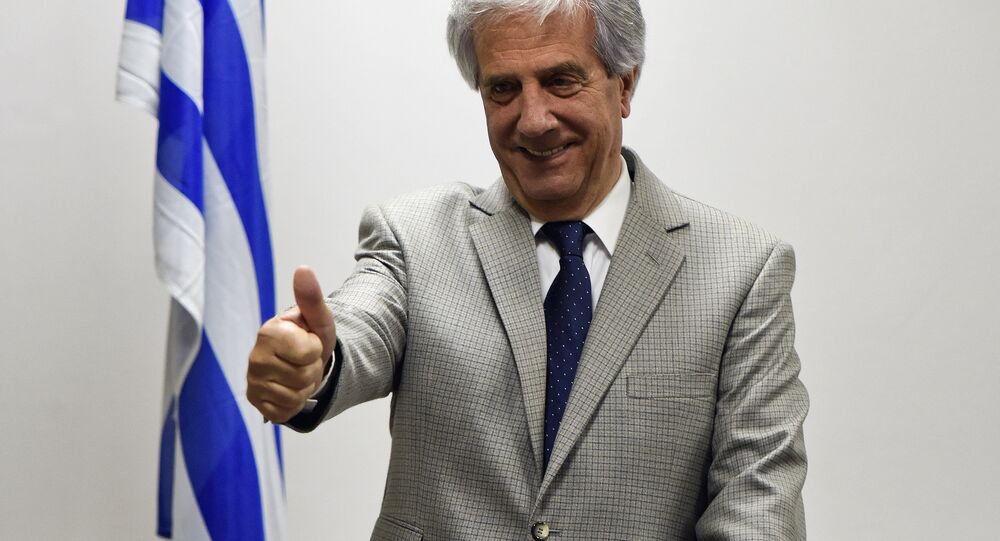 Colorful nesting dolls, folk dances, street signs in Cyrillic lettering, kebabs, dumplings and kvass – these are things San Javier, a small town nestled on the banks of a river of the same name, is famous for. This is also the place Uruguayan President Tabare Vasquez has invited his Russian colleague Vladimir Putin to visit.

The town of almost 2,000 honors the cultural traditions of the Russian settlers who crossed the Atlantic more than a century ago to start a new life from the ground up.

Proud as they are of their heritage, the residents of San Juan have managed to build their own identity by emulating some of the ways and habits of their new homeland.

Even though they can dance Russian folk dances, most of the townsfolk prefer mate to tea and speak a very basic version of Russian.

Looking for a better life

The first 300 families belonging to the Russian sect New Israel arrived in Uruguay in May 1913 seeking religious freedom, of which they were denied under Emperor Nicholas II.

© AFP 2020 / Yoshikazu TSUNO
Russia, Uruguay Presidents to Discuss Anti-Terror Fight in Moscow on Feb.16 - Ambassador
Their leader, Vasily (Basilio) Lubkov had been imprisoned in Russia as a religious dissident.

Many of the settlers followed Lubkov out of purely materialistic reasons though.

“They were illiterate and did not understand the ideas of New Israel, but Lubkov promised them land and better working conditions in Uruguay, a prosperous country with a mild climate,” Olga Sanin, deputy director of the Maxim Gorky Culture Center in Montevideo and a descendant of the first Russian settlers, told Sputnik Mundo.

Reality proved less optimistic though as the Russian settlers were ill-prepared for Uruguay’s humid and rainy climate.

Helped by local farmers they eventually managed to build log houses and a schoolhouse and started farming.

The settlers introduced Uruguayans to sunflower oil and the never before seen cultures of beekeeping and apiculture. They grew vegetables and cultivated flax, built Russian stoves and many other things.

A search for identity

The first Russian settlers did not speak Spanish and lived a secluded life under the leadership of Vasily Lubkov who was trying to recreate God’s Kingdom on earth which was seriously complicating the newcomers’ integration into local society.

The integration process accelerated during the mid-1920s, after Lubkov and about a dozen families of his supporters returned to Russia.

Those who stayed started opening up to local traditions.

Meanwhile, new Russian migrants running away from the revolution were bringing in political, rather than religious, ideas.

As a result, the Russian community was becoming increasingly secular and was quickly integrating into the local society.

The Russian settlers were still trying to connect with their faraway homeland.

To keep the traditions of the first settlers alive, they founded a local branch of the Maxim Gorky Cultural Center in Montevideo.

After the Second World War, when relations between the Soviet Union and Uruguay normalized, Russian Uruguayans were actively invited to return.

Several families responded to this call and left, but soon almost all of them returned.

During the military dictatorship in Uruguay from 1973-1984, the most active supporters of contact with the Soviet Union were purged. The Maxim Gorky Center was closed down, its interiors destroyed, the folk dance costumes burned and holidays outlawed.

© Flickr / Linda
Uruguay, Russia May Sign Military Cooperation Deal in September- Uruguay Defense Ministry
The symbol of resistance to military dictatorship was Vladimir Roslik a native of San Javier, a graduate of the Peoples’ Friendship University in Moscow and member of Uruguay’s Communist Party.

In April 1984, he was arrested and died from constant beatings in prison. Calls to investigate Roslik’s murder were made by newspapers, foreign diplomatic missions, the Vatican and the Inter-American Commission on Human Rights.

In fact, after this event, the military junta, which was forced by public pressure to take responsibility for Roslik’s death, was overthrown, and power was transferred to a civilian government.

Today, the Russian physician Vladimir Roslik is considered a national hero in Uruguay.

“During the years of the military dictatorship many in San Juan told their children not to speak Russian as soldiers went from house to house looking for banned literature and even accusing people of meeting the crews of Soviet submarines at Puerto Viejo,” Olga Sanin said.

Even though memories of the military dictatorship are still fresh on the minds of many of those living in San Javier, they are now looking for ways to bring back the Russian spirit in Uruguay.

© REUTERS / Stringer
Uruguay Hopes to Increase Deliveries of Meat, Dairy Products to Russia
“Despite the tragic memories I still believe in maintaining cultural ties with Russia and speak Russian,” said Olga Sanin, who is also a Russian language teacher.

Uruguay’s President Tabare Vasquez has invited President Vladimir Putin to come to Uruguay and join him on a visit to San Javier which is home to a small community of descendants from Russia.

“Together we could visit San Javier to meet the descendants of the 300 families from Russia who arrived there at the turn of the 20th century,” Vasquez said when meeting Vladimir Putin in Moscow earlier this month.

There are an estimated 7,000 ethnic Russians currently living in Uruguay.