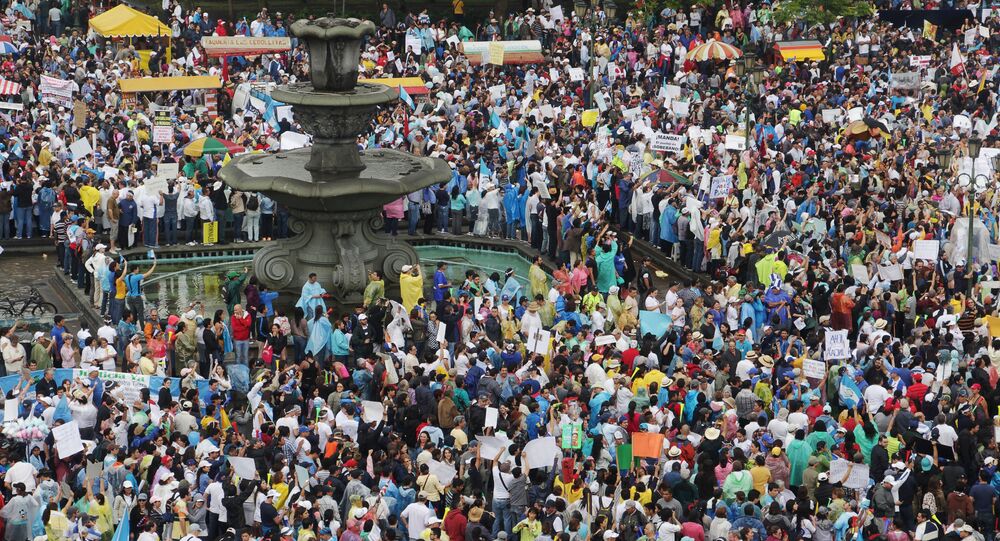 Thousands of Guatemalans Protest, Demand Resignation of Their President

According to reports, up to 60,000 Guatemalans took to the streets of the capital and other cities on Saturday to demand that President Otto Perez step down.

© AP Photo / Moises Castillo
Guatemalan Vice President to Resign Amidst Bribery Scandal
Thousands of Guatemalans took part in protests on Saturday, demanding the resignation of President Otto Perez and the country's top tax officials, following the earlier resignation of hiss vice-president due to a corruption scandal, which was first reported last month.
© Flickr / Thomas Hawk
Guatemalan Parents Suing San Francisco Police For Shooting Immigrant Son
Demonstrators gathered on the streets of Guatemala City and other cities across the country, which has a population of around 15 million.

Reports of the number of demonstrators ranged from 30,000 to 60,000; protesters responded to a call from organizers of the 'Citizens' Movement Against Corruption in Guatemala,' an umbrella group of more than 20 organizations which was established on Friday with the aim of fighting corruption in the country.

"Our decision to establish the Citizens' Movement Against Corruption, a permanent instrument both institutionally and long-term, will have the sole purpose of taking concrete steps to combat corruption and achieve the ethical management of resources in Guatemala," the organization announced in a statement released on Friday, ahead of Saturday's protests.

On May 8 Guatemalan Vice-President Roxana Baldetti resigned after public prosecutors revealed a customs fraud and bribery ring operating in the country's federal tax agency, following an investigation by the UN's international Commission against Impunity in Guatemala.

© REUTERS / Josue Decavele
An aerial view shows protesters at a demonstration demanding the resignation of Guatemalan President Otto Perez Molina, in downtown Guatemala City, May 16, 2015
The bribery scheme was first uncovered by prosecutors on April 16, and protestors first gathered in front of the National Palace of Culture on April 25 to demand Baldetti's resignation, after police revealed that Baldetti's personal secretary would be the main suspect in the investigation.

In addition to Baldetti and her aide, at least 50 people, including public servants, have been implicated in the scheme, including the country's top current and former tax officials.