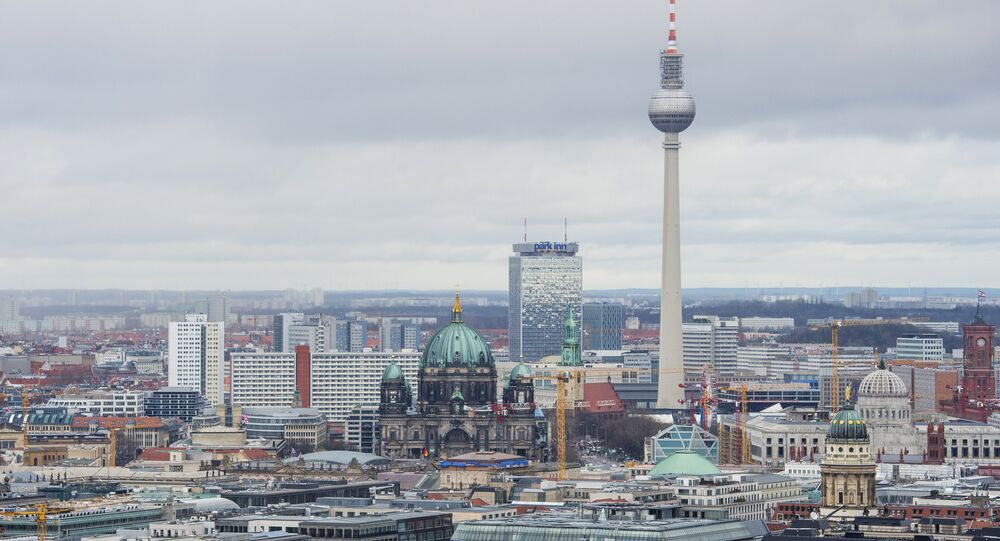 Lawmakers from Germany’s anti-immigrant Alternative for Deutschland (AfD) Party walked out of the Bavarian Parliament on Wednesday after a Jewish community leader accused them of playing down Nazi crimes.

Charlotte Knobloch, a Holocaust survivor and ex-president of the Jewish Community in Munich, also said that AfD disparages democratic values. The AfD entered the Bavarian Parliament for the first time last year, winning 22 seats, making it the fourth-largest party.

Radio Sputnik discussed the incident with Gerold Otten, an AfD representative in the German Parliament.

Sputnik: Now the former Head of Germany's Central Council of Jews told the Chamber that the AfD downplayed the crimes of the Nazis and has close connections to the extreme right. What is your response to that?

© AP Photo / Jens Meyer
German Authorities Put AfD Under Scrutiny for Suspected 'Anti-Constitutional Orientation'
Gerold Otten: Yes, I can see this is clearly a totally wrong statement and I think it is a clearly insulting statement because there is no evidence at all that the AfD has downplayed in a certain way Nazi crimes. [There is no] any statement from any politician who did that. So that is a clear wrong statement.

Sputnik: Obviously, there is some provocation with regard to this in terms of the wording of this statement. Is there some sort of story behind this, this particular statement in terms of bad feeling? What can you tell us about the history of Germany's Central Council of Jews? Is there a lot of bad feeling between their party and the AfD, historically?

Gerold Otten: Yes, it has been from the beginning on because the Council of Jews is very close to the German government. And they have long political ties with them. They are subsidised from [by] the German government. So a lot of political party members are members of the Jewish Council from the CDU or SPD. So that is clear that they take a position which is against [the] opposition party here. So they sing the song of the government party.

Sputnik: And how does this statement affect the party's reputation and why is it being made now then? I mean you have told us about this bad feeling but why is this statement just come out with regard to this situation now?

Gerold Otten: I think there is a story line behind that. It is one little piece in a long line of attacks against our party. This [has] started recently with, as we say in Germany "Verfassungsschutz", which is the internal security services. They are now from the government and under the government control to take the observation on the AfD because [they say] we are a right-extremist [party]. Then this is a situation which is criticised from our government, for example, in Hungary or Poland. But now they are doing it in Germany. And this is one other piece.

© REUTERS / Stefanie Loos
Germany's Domestic Security Office Intends to Look Into AfD Party - Reports
So from all different kinds of society, the AfD is attacked as right-wing and the main reason behind this is [that] we are coming up to the election for the European Parliament and they fear that we will have a good result in these elections. The polls are showing us around 14-15 per cent with the tendency going up. And so they are fighting us in the election campaign, yes. That is the storyline behind it.

Sputnik: I mean there has obviously been a lot of change in the German political architecture in the last few years. You are going through obviously transformations malaise. Who benefits the most from accusing the party of antisemitism? Because I think the general person in the street believes that no one benefits from this type of behaviour or accusation really?

Gerold Otten: This is exactly. I think that they are using the wrong strategy and instead of taking us as political opponents, choosing these […] say Nazi colour, which means Nazi bad and always coming up with Nazi, Nazi, Nazi. People don't believe that anymore because everyone can see that the AfD is completely different, we have a completely different party programme. Then it is historically completely out of the frame to compare us to the Nazi Party. But in Germany, it worked quite well and in recent years to stigmatise someone as a Nazi and then bring him out of the political discussion. But it is not working anymore. So a lot of people say: "ok, we see [that] AfD is a democratic party, they work in the Parliament, I'm a member of parliament in the Bundestag. So they work in the chambers, they work in the council." So they see that we are doing a good job. And that we are also pushing the other parties in a direction, where they never wanted to go.

Sputnik: Yes, I can understand your points of view. Then to what extent is the party prepared to soften its lines now following repeated criticism? What consequences could this have for the party? Are you going to soften your stance? I mean are you going to re-strategise? What is the effect of these comments in terms of the way the party is going to move forward?

Gerold Otten: I think we have a party programme which is our guideline, just this programme, which is a democratic programme, which we criticise certain points in society. What we will do and what we are doing already and we have done in the past is that we expel people from the party which are showing extreme right-wing positions, which are not democratic, which [go] against our constitution, which [go] against the law and we expel these people. We are quite radical in that. I am myself working in a group looking especially into these cases and so we take every legal note which we can do to get them out of the party.