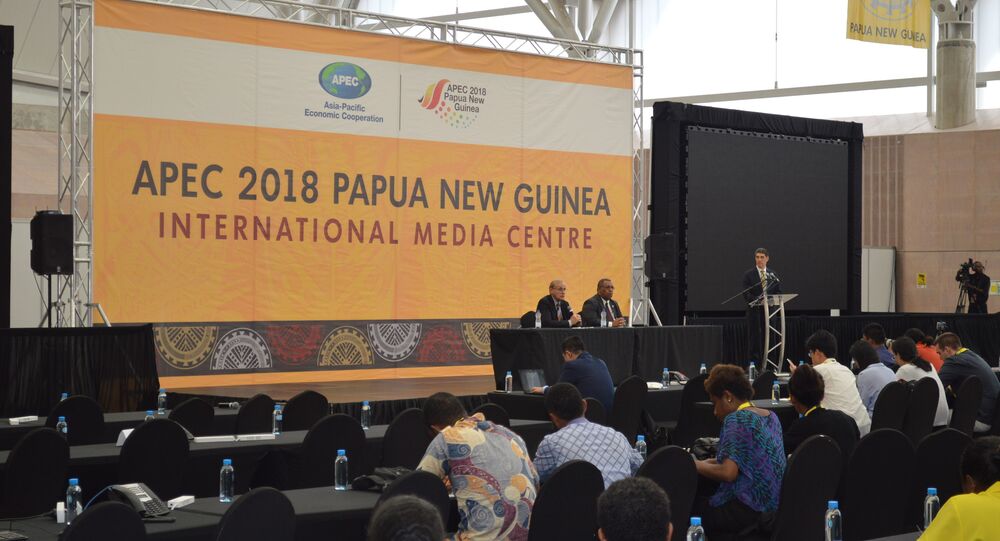 Papua New Guinea is hosting the APEC summit this week. While “a bidding game” has started between China, Australia and the US for the influence in the region, the Pacific nation itself, according to PNG’s Foreign Minister Rimbink Pato, is open for cooperation with all major superpowers, including Russia.

Foreign Minister Pato, who's also in charge of the country's trade affairs, gave an exclusive interview to Sputnik's correspondent on the sidelines of the APEC senior officials' meeting in Papua New Guinea's capital Port Moresby.

Sputnik: What are the foreign policy and trade goals that your country is planning to reach as a result of hosting the APEC?

Rimbink Pato: It's a very important event in terms of foreign policy. It's an area where we can position ourselves in relation to our role in APEC economies, as well as on some of the issues that affect the world globally. So this is a unique opportunity for us in the Pacific to do this.

Australia and the US are also competing for investment and business opportunities in PNG and the region, with Washington frequently using the term "Indo-Pacific", with a broader view not only on Asia, but on India (currently not a member of the APEC) as well. https://t.co/GqQEmmysZk

Sputnik: Last year you met with your Russian counterpart Sergey Lavrov on the sidelines of the APEC ministerial meeting in Da Nang, Vietnam. Here we see that Papua New Guinea is embracing many cooperation and investment opportunities with China, Australia and the US. Are there any plans for similar projects with Russia?

Rimbink Pato: We're looking for future partnerships with Russia as well, because it is our foreign policy to be "friends of all and enemies of none". And, of course, Foreign Minister Lavrov is a great friend of mine, and of the Pacific.

Papua New Guinea FM Rimbink Pato to @SputnikInt in Port Moresby on cooperation with Russia and on meetings with Russian counterpart: "Foreign Minister Lavrov is a great of friend of mine, and of the Pacific." https://t.co/QC6EkJ44Sv

So, he's been looking at future collaboration in our region, and I'm looking forward to meeting him here in Papua New Guinea, so we can discuss in detail the issues that are impacting how Russia and our country can be more involved in promoting sustainable development, climate change, and the digital economy, which is a game changer for the world. There are so many things that Russian Federation and Papua New Guinea can do, including, of course, re-opening a Russian mission in Papua New Guinea.

Sputnik: Papua New Guinea's opinion on international policy issues is very important. Here at the meeting you mentioned your participation in this year's UN General Assembly. Another issue that has made it into the headlines this summer is Papua New Guinea's decision to revoke the recognition of Kosovo's independence. Could you tell us why your country decided to become the sixth nation to take such step?

Rimbink Pato: We are about the international rules-based order. And we will observe the proper protocols established by the UN, or major international institutions such as the European Union. As far as we know, there are processes that they are advocating — a move forward in terms of dialogue and compromise between Pristina and Belgrade, and once there is a resolution, once there is a UN decision made clearly, we would take course to provide appropriate recognition.