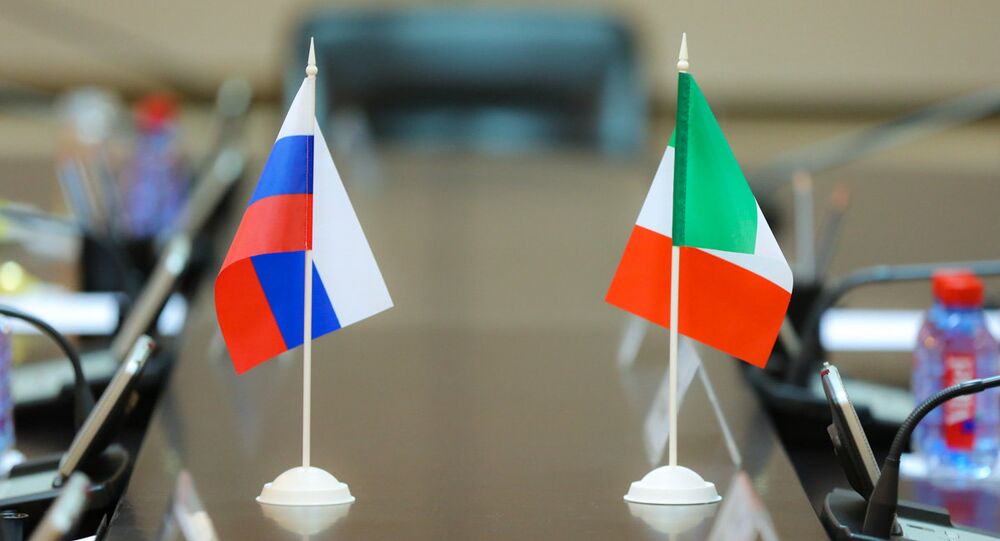 On July 19, Russian President Vladimir Putin spoke at the Conference of Ambassadors and Diplomatic Representatives of the Russian Federation, which is held every two years in Moscow. On the eve of the meeting, Sputnik Italia met with the Russian Ambassador to Italy, Sergey Razov.

Sputnik: Despite the sanctions, Italy continues to be one of Russia's closest partners in Europe. The new government of Giuseppe Conte has repeatedly stated its interest in lifting the sanctions, but at the summit in Brussels it did not use its right to veto. How, in light of this decision, will the Russian-Italian dialogue develop further?

Sergey Razov: Indeed, despite the turbulence and unpredictability of the international situation, Italy has been and remains one of Russia's key priority partners on the European continent. Russian President Vladimir Putin has spoken about this many times and once again stated this fact in April of this year, upon receiving the credentials of the new Italian ambassador to Russia.

The parliamentary elections in Italy that were held in March have put forward the political forces behind the [audit] of the destructive policy of the European Union towards Russia. I will note that the results of the will of the Italian people did not come as a big surprise. During personal interaction with the representatives of the public and business circles, we noted their growing reluctance to follow blindly in the wake of anti-Russian EU politics and put up with multi-million [euro] losses from counterproductive economic restrictions.

© AFP 2020 / FILIPPO MONTEFORTE
EU's Anti-Russian Sanctions Shouldn't Be Extended 'Automatically' - Italy's PM
The new government of Italy has adopted a program document, in which, with reference to Russia, it was mentioned that there is a need to establish a dialogue and review the sanctions policy. Hence, we are proceeding from commitment to these interests. At the same time, we understand that the Italian "government of changes," as it is called here, has been in power for only a month and a half. Obviously, to start productive work, many organizational and technical issues need to be "cleared up," to detail the program and to determine the priority agenda.

I have no doubt that Russian-Italian cooperation will develop constructively and steadily. We have accumulated considerable experience working together in various fields. We are strengthening the political dialogue, in the framework of which the parties exchange views on the directions and terms of future visits along state and departmental lines.

I had discussed this with the Chairmen of the Chamber of Deputies and the Italian Senate, the heads of key parliamentary committees and government ministries. We are waiting for the approval of the new composition of the Large Russian-Italian Inter-Parliamentary Commission, the Italy-Russia Friendship Group, and the intensification of contacts between parliamentary committees and commissions. Before the end of the year,[ we] intend to hold a meeting within the framework of the Russian-Italian Council for Economic, Industrial, Monetary and Financial Cooperation.

Sputnik: Italy recognized the USSR back in 1924, and in 1969 became the first Western country to sign a long-term gas supply agreement with the USSR. Can these dates be considered an illustration of two aspects — political and economic — of our bilateral relations? And what, in your opinion, is now dominant in Russian-Italian relations, politics or the economy?

Sergey Razov: In fact, politics and economics are closely interrelated. A phrase by Lenin, "politics is a concentrated expression of the economy" is very frequently quoted. The worsening of the general political climate in Russia's relations with the so-called countries of the "Collective West" has strengthened the economic dimension of our relations with Italy.

Italian business, of course, is interested in building up and diversifying trade and economic ties with our country, striving not to lose its position in the Russian market, to consolidate the areas that have been developed for many decades of mutually beneficial cooperation. Despite the decline in the volume of trade turnover, including due to sanctions restrictions, from a record $54 billion in 2013 to $24 billion in 2017, it is once again in an upward trend — for the first quarter of 2018 compared with the same period last year, growth amounted to about 15%, which inspires restrained optimism. There is a continuation of implementation of promising projects in the aircraft, chemical, gas processing and other industries.

Sputnik: Italy and Russia have a huge amount of joint cultural heritage in painting, literature, architecture and music. What has become especially close to you over these 5 years that you work in Italy?

Sergey Razov: The ties between Russia and Italy in the field of culture and art have a long history. A number of outstanding works of architecture were created by Italian masters (A.Fioravanti, B.Rasstrelli, K.Rossi, D. Trezzini). The Russian artists S. Shchedrin, K. Bryullov, I. Repin, V. Serov and writers N. Gogol, M. Gorky, F. Dostoyevsky were also closely associated with Italy. Many of them not only studied and worked in the Apennines, but also, living there, became bearers of cultural ties between Russia and Italy.

The Russian-Italian cultural dialogue is not only a collection of memories of the greatness of the past days. It continues to develop dynamically today. In 2011, a year of culture and language exchange was held, and in 2013-2014 it was the year of tourism. This year Russia is holding a unique and unprecedented festival of Russian culture on the Apennines — the "Russian Seasons." The program includes more than 300 events in 80 Italian cities, hundreds of thousands of Italians have already visited the events. Another indication of the high level of bilateral cooperation will be Italy's participation in the honorary status of Guest Country at the VII St. Petersburg International Cultural Forum (to be held in November this year).

Sputnik: Your diplomatic career is very diverse — you were Russia's ambassador to China and to Poland, and now [your represent Russia] in Italy and San Marino. How does the experience of immersing yourself into the political and cultural traditions of East and West helped your successful work in the Apennines?

Sergey Razov: No experience accumulated in life is superfluous, no matter what profession the person chooses. One of the precise and undoubtedly pleasant aspects of diplomatic work is the opportunity to get acquainted with the specifics of the individual countries in which we have to work. To "try on" the way of life of different peoples, while remaining a guest.

As Rudyard Kipling said, "East is east, and West is west, and never the twain shall meet." Indeed, these civilization systems have many different histories, cultures, traditions, and patterns of behavior.

Sputnik: How do you relax? The residence of the ambassador is the Villa Abamelek, which occupies 33 hectares. This is the second largest foreign territorial possession of Russia. Is it true that there is a football field on the territory and that one can even see foxes and hedgehogs over there?

Sergey Razov: Yes, indeed, the residence of the Ambassador to Italy is the Abamelek Villa. It is a unique place, the pearl of Russian state property abroad. One must bow to SS Abamelek Lazarev, a Russian prince with Armenian roots, who more than a century ago bought a plot of land just a kilometer from the Vatican and constructed a magnificent manor, featuring representative rooms and outbuildings for the residents.

Now the area is designated for [use by] the employees of Russian overseas institutions in Rome and their families. On the territory there is a swimming pool, a football field, and extensive park areas. There are foxes and parrots, so in one word it is an ideal place for living and recreation. We carefully protect this inheritance, as we are engaged in the reconstruction of objects and we carry out restoration work. Russian and foreign guests who visit Villa Abamelek are always left with a deep impression.