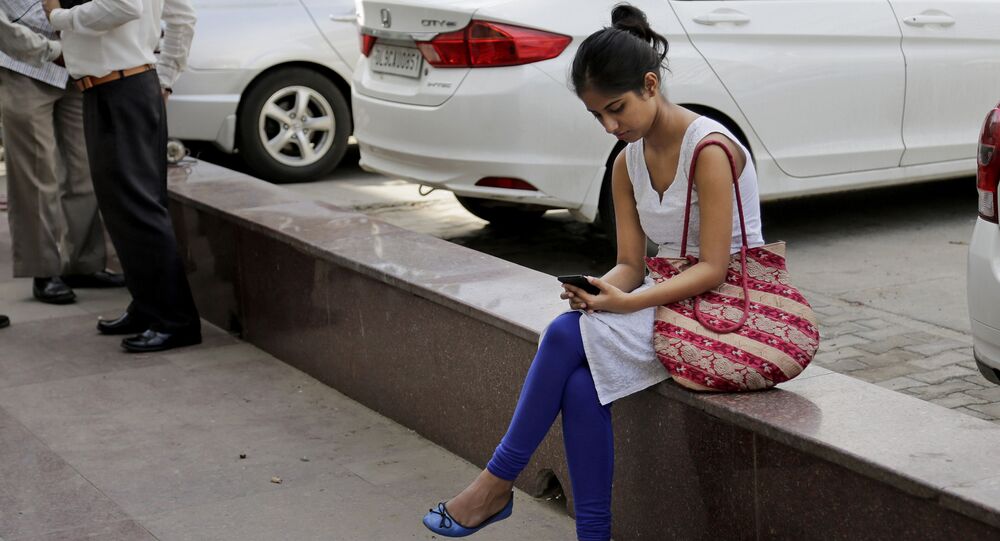 During his Independence Day speech, Indian Prime Minister Narendra Modi announced the launch of the National Digital Health Mission (NDHM). The ongoing pandemic has also motivated the government towards digitisation. However, there is a growing prevalence of privacy threats and increased surveillance concerns.

The advance of technology has opened many doors in various sectors around the world. In India, shattering all taboos, FemTech is taking control of women's intimate hygiene, personal wellness, and health solutions. Rather than being all coy about the issue, digitised wellness trackers map the dates and keep a note of hormone-driven symptoms such as hot flushes, insomnia, anxiety and loss of libido - among other things - and are gaining popularity among Indian women.

© AP Photo / Mahesh Kumar A
Disruption of Health Services in India to Lead to Highest Loss of Life in South Asia, UN Report Says
With a market of more than $310 million in India, the FemTech Industry is slowly becoming mainstream. These fem-Tech start-ups are changing the dynamics of women's healthcare in India and providing one-stop solutions. According to a recent report by Frost & Sullivan, the global fem-tech industry could be worth $50 billion in the next five years. However, this radical digitisation is a cause for concern too.

In 2019, UK-based advocacy group Privacy International revealed that period-tracking apps including MIA Fem and Maya - owned by India-based Plackal Tech - sent personal data about female users (such as their use of contraception, the timing of their monthly period, symptoms such as swelling and cramps, and more, directly to Facebook.

Several industry insiders told Sputnik that advertisers often look for the user's state of mind so that they strategically target ads. After the Privacy International report came out, four of the apps made changes in their data-sharing practices or launched internal investigations.

The femtech sector targets women's issues such as menstruation and period care products, fertility and birth control, pelvic health, menopause, hormonal disorder among others. It is worth pointing out that to get efficient results, women users are supposed to share deeply personal and intimate details.

"As an infertility start-up we collect data via organic registrations on the app. Data breaches can affect a woman's confidence, personality and trust with various apps online. We prevent it by encrypting the same and also take the required permissions or approval from women at the time of registration," Snneha Lukaa, co-founder of BabyReady, told Sputnik.

© CC0
Privacy Row: Indian Gov't Slams WhatsApp for Obtaining 'Trick Consent' Using 'Anti-User' Policy
However, when such information is presented with such data as name, age, and location as well as email address and phone number, the user can be easily identified. In most cases, such apps provide users with a simple sign-in by linking their account to existing social media or email accounts, according to cyber experts.

"Information conduits created via collection from apps such as this in the wrong hands could prove harmful to an individual’s interests — especially if those individuals are women/marginalised individuals. While men face similar threats from healthcare technology, women face greater harms because of menstrual or reproductive surveillance, a nuanced subset of surveillance capitalism," Shefali Mehta, programme manager of the think-tank, The Dialogue, told Sputnik.

Mehta also said that there is a need to control surveillance capitalism that involves data collection and processing in a way that is exploitative in nature. "In India, the data governance frameworks are at an almost embryotic stage. At present, in the absence of a functional personal data protection Bill, this control is rather limited owing to scattered and insufficient legislation in the area," Mehta said.

In 2018, the European Union General Data Protection Regulation (EU GDPR) came into force and it made important changes to boost user rights by giving them more control over their data and information relating to the use of their data. In India, because of a lack of awareness, Indians still behave quite casually about protecting their private data.