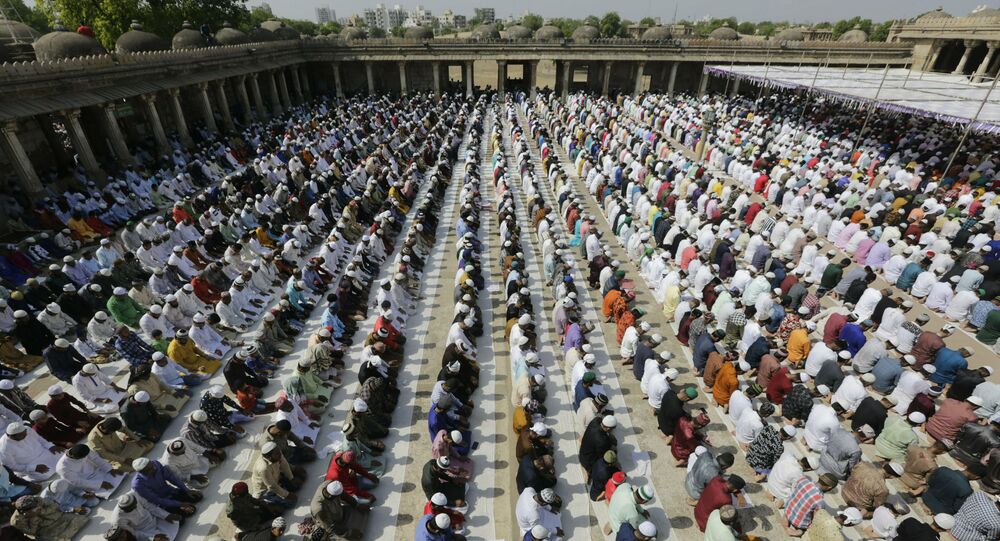 India’s topmost Hindu nationalist leader, RSS chief Mohan Bhagwat, a prominent ally of Prime Minister Narendra Modi, has said that “Hindus and Muslims have a common DNA”. “If a Hindu says that no Muslim should live here [in India], then that person is not a Hindu”, he said. Bhagwat's comments have stirred unease among many Hindu nationalists.

India's leading Hindu nationalist organisation - Vishwa Hindu Parishad (VHP) - has said that it will continue with its mission of reconverting Muslims back to Hinduism, as it reacted to the Rashtriya Swayamsewak Sangh (RSS) leader’s recent remarks made during an event of its Muslim wing.

Reconversion in this case is about bringing those people back into the Hindu-fold who may have been converted to Islam or Christianity against their will.

"What he meant is that all Muslims were originally Hindus... They have the same ancestors... No matter what, we will keep welcoming Muslims to Hinduism", Vinod Bansal, the spokesperson of the VHP, told Sputnik, clarifying what RSS chief Mohan Bhagwat meant by his recent remarks.

Bansal, however, added: “The idea of lynching or killing anyone (due to mere suspicion of cow theft or cow slaughter) can’t be justified in Hindu religion. We [Hindus] are peaceful people”.

“However, there are Islamic forces in the nation which indulge in such acts [cow slaughter] just to create discord among Hindus and Muslims. Or there are followers of Islam who spread communalism... We can’t tolerate such people”, he stated. "These Islamists are not welcome in the country. Our struggle is against such communal-minded elements”.

The RSS is the ideological parent of Prime Minister Narendra Modi’s Bharatiya Janata Party (BJP). The RSS, VHP, and BJP are together known as the Sangh Parivar (family).

RSS head Bhagwat, while speaking at an event in Ghaziabad city on Sunday, stated that whoever indulges in the "lynching" of Muslims due to the mere suspicion of cow theft and cow slaughter is not a Hindu. He advised that the law should be allowed to take its course, at the same time noting that cows are a “sacred animal” to all Hindus.

The Sangh and its allies have been accused by many people of attacking India’s secularism with references to India’s “glorious Hindu past”.  The RSS and its allies view India’s Muslim rulers (between the 15th and 19th centuries) as “invaders and outsiders”.

A sizable section of India’s 200 million Muslims have often expressed concerns over the policies of the RSS, including advocating the “return of Muslims” to the Hindu fold.

Prime Minister Modi has also often been accused by his political opponents of encouraging the Hindu nationalist agenda of the RSS since coming to power in 2014, despite the federal constitution stating that India is a “secular” state.

In fact, Bhagwat himself said in December 2019 that he views all 1.3 billion Indians as Hindus.

“The son of mother India, whether he may speak any language, from any region, follow any form of worship or not believing in worship of any is a Hindu... In this regard, for Sangh all the 130 crore (1.3 billion) people of India are [a] Hindu society", the RSS chief stated back then.

However, Bhagwat's Sunday remarks invited the wrath of the RSS' own leaders, many of whom are reportedly saying that it could be an attempt at an "image correction".

Leading Indian Hindi daily Dainik Bhaskar quoted senior leaders within the RSS as stating that Bhagwat’s comments were not in line with the views of Keshav Baliram Hedgewar, who founded the RSS in 1925.

Talking to Bhaskar on condition of anonymity, several RSS leaders pointed out that the RSS founder’s aim was to establish a “Hindu Rashtra” (Hindu nation) in India.