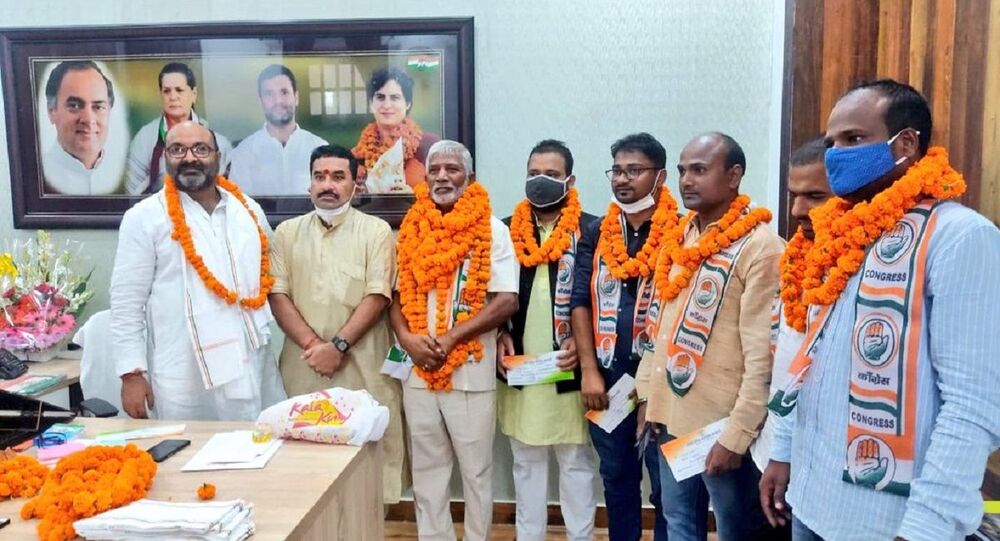 Political parties in the Indian state of Uttar Pradesh have started their preparations for the upcoming elections. While the ruling party Bharatiya Janata Party (BJP) is making efforts to retain power, opposition parties are leaving no stone unturned in efforts to dethrone the Yogi Adityanath government.

India's Congress party has started making its manifesto for the state elections and has also asked the party workers to connect with the people of Uttar Pradesh, a northern Indian state with a population larger than that of Brazil. Ajay Kumar Lallu, state president of the Congress party, shared the strategies of the party for the crucial elections in an interview with Sputnik.

Sputnik: What will be the strategy of the party for the 2022 Assembly elections in Uttar Pradesh?

Ajay Kumar Lallu: The Bharatiya Janata Party government in Uttar Pradesh has failed in every sense. It has not only failed in controlling the law and order situation but also in providing employment. Women are not secure. Incidents of rape, murder, kidnapping, etc. are at all-time high.

Unemployment is another big issue in the state. There have been irregularities in the recruitment process. The state government organises investors' summits, defence expos, etc., but that was only for branding purposes. It has failed to attract companies to set up base in the state and generate employment for the youth.

We will also take up the issues of farmers. The farmers are protesting against the three agricultural laws, but the government is ignoring their demands.

Farmers in Uttar Pradesh are extremely upset with the government: they are not able to sell their produce because purchase centres are shut down due to the pandemic. The Narendra Modi government has also failed to fulfil its promise to pay over $1.3 billion to sugarcane farmers.

So, these will be the main issues that will be taken up in front of the people of Uttar Pradesh.

Sputnik: Congress has started a 'Speak-up Minority' campaign. Is the party depending too much on the votes of the Muslim community?

Ajay Kumar Lallu: Recently, Priyanka Gandhi Vadra has constituted a manifesto committee that includes senior leaders like Salman Khurshid, P. L. Punia, etc with an aim to connect with people from all the sectors and communities.

We connected with the Madrasas and Ulemas as per the directions of the committee only. Priyanka Gandhi Vadra has also directed all the party workers to connect with everyone and the party’s manifesto for the elections should be inclusive. So, we are in touch with them to make an inclusive manifesto.

We will take our election manifesto among the people of Uttar Pradesh and make them spread awareness about the schemes of the party.

Sputnik: As per the reports, under the campaign, the party is informing the voters about a secret nexus between the Samajwadi Party and Bharatiya Janata Party. Does this mean that Congress will not form an alliance with the Samajwadi Party if needed?

Ajay Kumar Lallu: As far as alliance is concerned, the Congress party will ally with the people of Uttar Pradesh. We will come to power with the help of that alliance only.

Congress has played the role of responsible Opposition in the state despite being less in number. We have been vocal about all the issues ranging from deaths due to spurious liquor to rape incidents in the state.

We have taken up the fight against the corruption of the ruling BJP government in the state. There are around 40 scams of the government from provident fund to the distribution of dresses to the students and the most recent land deal scam in Ayodhya.

I believe that Samajwadi Party and Bharatiya Janata Party are hand and glove. The Samajwadi Party has failed to act as a responsible Opposition. So, it clearly hints towards a secret alliance between the two parties.

Sputnik: There has been dissent among the youth of the party. How is the party planning to deal with this?

Ajay Kumar Lallu: It is easy to blame anyone. Those who have left the party for momentary gains won’t survive anywhere. If we talk about Jitin Prasada, then the party has done so much for him. He was made cabinet minister, given a Congress ticket to contest elections at a very young age, was appointed as West Bengal state in-charge ahead of the state elections and several other key responsibilities.

Still he chose to join the party (BJP) which he has been cursing till now. He has ditched the Congress party. No one can do anything for such people.

The Congress party is blessed with loyal workers who will continue to serve the people in their own capacity.

Sputnik: Rahul Gandhi's leadership has also been questioned. So will the party contest the UP polls under the leadership of Priyanka Gandhi Vadra?

Ajay Kumar Lallu: Rahul Gandhi is a national leader and acceptable to all workers. It is because of him that a simple person like me has been made state president of the oldest party of the country. He is the youth icon and he inspires the youth. The way he is taking up the national issues, soon the Congress party will come to power in the (national government) under his leadership.

As far as Uttar Pradesh elections are concerned, Priyanka Gandhi Vadra is the national general secretary of the party and state in-charge of Uttar Pradesh so the Congress party will contest the elections under her leadership in the state.

Sputnik: Who will be the Chief Minister candidate for the party?

Ajay Kumar Lallu: This will be decided by the Central leadership.

Sputnik: The BJP has started appeasing the smaller and regional parties. Is Congress also planning to do something on similar lines so that the United Progressive Alliance can be strengthened?

Ajay Kumar Lallu: As I said earlier, the BJP has failed miserably in the state and people are not happy at all with the government. The people of Uttar Pradesh are angry because they have lost their family members due to a lack of hospitals, oxygen and medicine, inflation is at all-time high, people are not getting the cooking gas subsidy, farmers are committing suicide, and employment is also at its peak in the state. So, the BJP won’t be coming back to power in the state.

As far as strengthening the United Progressive Alliance is concerned, several small parties are in touch with us but as of now we will be contesting the elections on our own.