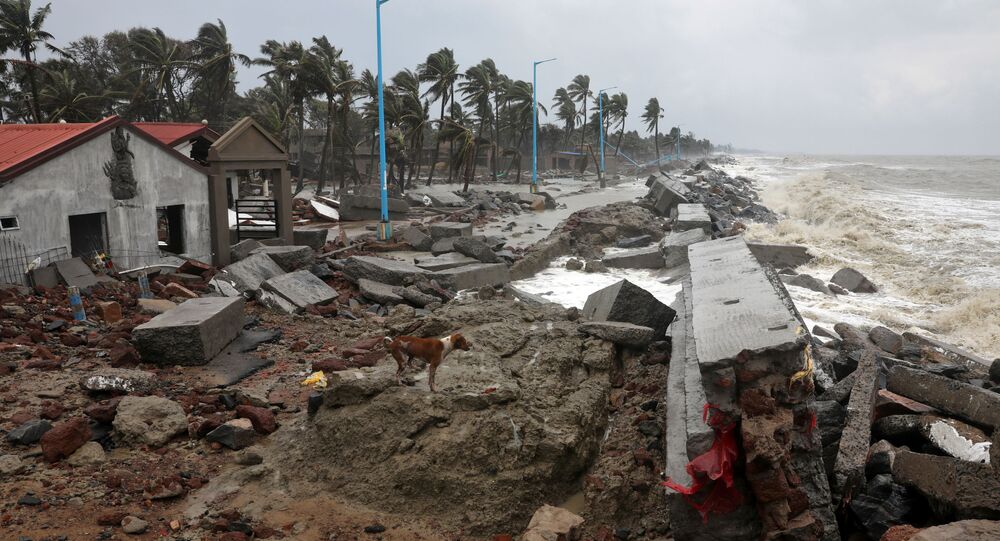 Nothing to Eat, Nowhere to Go: Deadly Cyclone 'Yaas' Puts Bengal Villagers on Edge of Survival

There is salt everywhere - in the paddy fields, the freshwater lakes, and the broken walls of the mud houses. The teardrops of local residents are salty too, mostly due to the lack of state support for the affected communities.

With two acres of his land underwater and a family of 11 to feed, Sunil Mondal of Namkhana block in West Bengal sits by the riverbank overlooking his property.

“Look at this farmland. What will we do now? What will we eat,” said Mondal, pointing his fingers at the paddy fields inundated with saline water.

Mondal is just one of many farmers who lost their livelihood to the tropical cyclone ‘Yaas'. which caused huge devastation along India’s eastern coastal area.

The cyclone that formed on the Bay of Bengal made landfall on 26 May, ravaging most parts of the delta and coastal region of West Bengal and Odisha. The Cyclone and heavy rains thereafter killed at least 10 people and rendered thousands homeless.

The Sundarban archipelago, which is spread across 4,000 square kilometres in the Bay of Bengal, is a cluster of islands formed at the confluence of the mighty Hooghly, Malta, Meghna, Padma and Brahmaputra rivers.

In one of the worst-affected areas of Sundarbans -- Namkhana, villagers along the banks of the Hooghly River were bracing for the cyclone to hit them. Instead, due to the full moon, the spring tide swelled the river, broke the embankments and flooded the entire region.

“It has been more than a week and not a single government official has visited our area. We don’t have drinking water. On the night of the disaster, people were taken to a shelter house, but it could barely accommodate all the villagers. We were packed like sardines. Many people went just to save their lives. No one had the time to think about COVID-19. We were given a cup of puffed rice to eat for dinner,” Sunil Mondal rued.

Villagers suggest the tides rose as high as 10-12 feet (3-3.6 metres). There has been a pressing demand from the locals for concrete embankments; however, the plea has fallen on deaf ears.

“We have written to everyone from the block district officer to the legislator, yet authorities continue to build mud embankments,” added Abdul Suku Sardar, a resident of Ishwaripur village. Ishwaripur continues to be inundated with knee-length saline water that entered on the day of the cyclone.

“We repair the embankments every year and then a cyclone comes, and we have to repair it again. It is likely putting money in the water,” West Bengal state chief Mamata Banerjee said while chairing a damage assessment meeting in Kolkata last week.

In the neighbouring Mousuni Islands, where villagers thrive on agriculture and tourism, locals have little to nothing left to hold on to.

The cyclone has almost wiped out the entire island, said a distressed Sujan Majhi, who made his way to the mainland a few days after the landfall. In his lifetime of 78 years, Majhi claims he has never witnessed such devastation and personal loss.

“Our lives are entangled with cyclones and tides. But nothing has been as devastating as Yaas,” Majhi added.  Several community kitchens have been set up on the island to feed an estimated population of 30,000 people.

Other small islands on the Bay such as Ghoramara faced a threat from the rising sea water level.

Over the past three years, the ecologically sensitive region of Sundarbans has faced four cyclones. Fani struck in May 2019, followed by Bulbul in November 2019, then Amphan battered the region in 2020, and most recently Yaas.

The breached embankments can be seen across the Sundarbans. In Raidighi block, situated on the banks of Mani River almost 70 kilometres west of Namkhana, similar stories of anguish and pain resonate. Saline water mixed with the freshwater ponds, used to cultivate shrimps, ruining the livelihood of multiple villages.

In Kumrapara village, residents were taken to a government school to provide shelter the next day. “We lived on the inundated road for a day and later we were taken to the school. We don’t have anything left. Our house, papers, whatever little money we had, everything has been washed away,” said Adil Sheikh, a boatman.

The West Bengal fisheries department has pegged the estimated loss to be around $1.5 billion.

Lives were saved because the landfall happened during day time, had it been at night, deaths would have been in the hundreds, added Sumi Sen while preparing lunch for at least 40 families at the shelter.

“We expected the wind to hit us. Accordingly, I tried to secure the roof of the hut, little did I know that the water would destroy us. We can’t return till the banks are fixed. It might take another week,” Sen said.

Meanwhile, NGOs, small organisations and volunteers have taken it upon themselves to donate relief materials such as dry cereals, pulses, clothes, et al to the worst-affected villages.  On Monday, a government official said over 76,000 people in West Bengal have submitted their applications, seeking the state’s aid under the Duare-Tran (relief at doorstep) scheme.