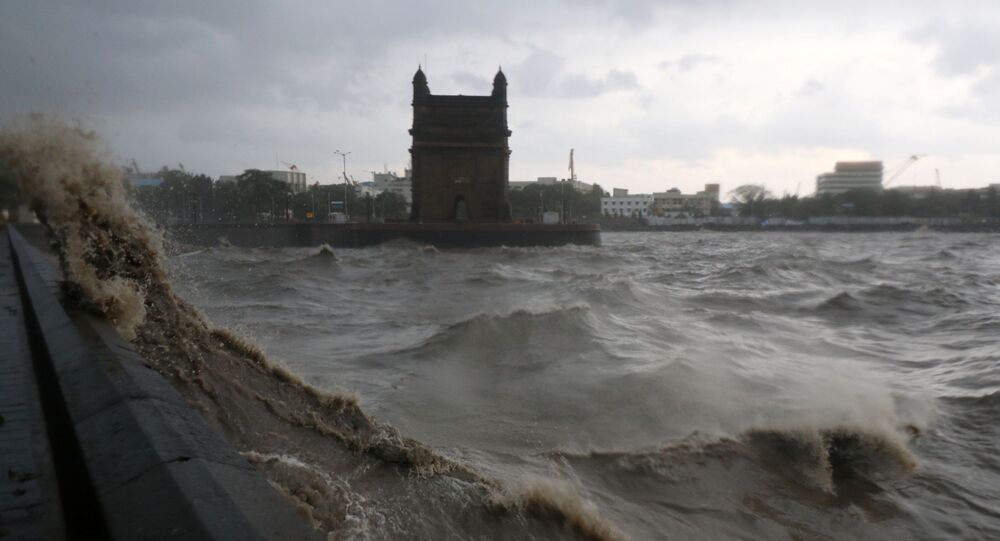 In 2020, about 2,000 people died in floods and cyclones in India, the maximum loss of lives globally due to climate change-triggered events that year, say findings of an international report ‘Counting the Cost 2020: A Year of Climate Breakdown released last December’.

India witnessed the fury of cyclone Yaas on 26 May in the eastern states of Odisha and West Bengal, which left 11 people dead and several others missing apart from causing widespread damage to property and the environment.

It was the second cyclone to hit India within several days that month.  Prior to Yaas, the country's western coast had witnessed the fury of tropical Cyclone Tauktae on 14 May, affecting the states of Gujarat, Maharashtra, and the Goa coast. It left a trail of destruction in the states and nearly 104 people dead.

© REUTERS / RUPAK DE CHOWDHURI
A Hindu priest carries an idol of Lord Jagannath from a seafront temple to a safer place ahead of Cyclone Yaas in Balasore district in the eastern state of Odisha India, May 26, 2021

While a cyclone on the country's eastern coast - the Bay of Bengal - is an annual affair, it is said to be a relatively uncommon occurrence on the western side, in the Arabian Sea. It was there, on 14 May, that cyclone Tauktae intensified rapidly – a fact that India Meteorological Department (IMD) had not forecasted.

According to experts, rising ocean temperatures in both the basins are assisting these cyclones in their "rapid intensification" process.

Talking to Sputnik, about both cyclones, Dr. Roxy Mathew Koll, Scientist from the Indian Institute of Tropical Meteorology, said: "both the cyclones - Yaas and Tauktae - were preceded by very high sea surface temperatures, which had reached 31-32°C. These high temperatures were conducive for cyclone Tauktae to intensify into an extremely severe cyclone in a short time. Similarly, high temperatures assisted Yaas also into intensifying rapidly."

"However, there is one difference. Tauktae spent several days in the Arabian Sea, continuously drawing in heat and moisture, and reaching a peak intensity of more than 220 km per hour.

© AP Photo / Rafiq Maqbool
Fishermen try to move a fishing boat to a safer ground on the Arabian Sea coast in Mumbai, India, Monday, May 17, 2021

"In the case of Yaas, it formed in the North Bay of Bengal, and the travel distance to landfall was shorter. As a result, it didn't get a long period over the ocean to blow up to the intensity of Tauktae," he underlined.

A decade-by-decade analysis by India Meteorological Department (IMD) shows that the Bay of Bengal has had more cyclones than the Arabian Sea since 1891-1900. However, the data also indicated the Arabian Sea turning tumultuous as it had 17 cyclonic events between 2011 and 2020, the highest in a decade since the 1890s.

Calling the situation "worrisome", meteorologist Mahesh Palawat says: "For sure it is a worrisome situation for the country, especially the West Coast. Global warming has led to a substantial increase in sea surface temperatures, which has led to the formation of more tropical cyclones."

"Earlier, we witnessed three to four weather systems in the Arabian Sea, out of which one used to intensify into a cyclone. However, conducive ocean temperatures would now see more systems strengthening into cyclonic storms," he added.

"The Indian states of Maharashtra and Gujarat would now have to give more emphasis on disaster preparedness," suggests Palawat.

According to experts, due to climate change, the country is experiencing extreme events in 2020 like cyclone Amphan, and floods in the Indian states of Kerala, Bihar, and Assam. During the monsoon season last year, India witnessed excessive rainfall, which caused floods and landslides.

© AFP 2021 / Sujit Jaiswal
Waves lash over onto a shoreline in Mumbai on May 17, 2021, as Cyclone Tauktae, packing ferocious winds and threatening a destructive storm, surge bore down on India

It is estimated that between June and October 2020, damages due to extreme events amounted to $10 billion. However, the uncounted figures could be much higher.

Warning about the economic loss resulting from the events, M. Rajeevan, Secretary, Ministry of Earth Sciences, says: "We should be prepared", indicating there could be a more significant threat to life and infrastructure.

Manju Menon of Centre of Policy Research, who has been engaged with India's environmental laws and policies for over two decades, suggests there is a need to think along the lines of sustainable development in the coastal areas, as the "western coast is the hub of economic activity".

"The western coast of India has several nuclear power plants, chemical industry corridors, and other large infrastructure that can leave lasting, disastrous impacts beyond those of the cyclones," she warned.