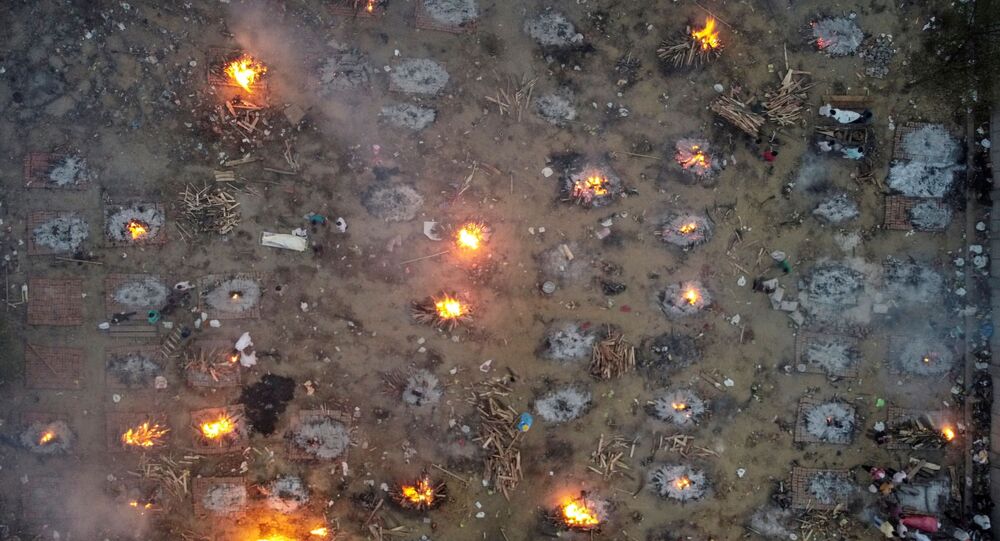 It is a funeral like no other. There are no mourners, only dead bodies that are piled one on top of the other and brought to the crematoriums straight from their hospital beds. Since the onset of the pandemic, the country has recorded nearly 300,000 deaths so far.

India is grieving the colossal loss of lives due to the ongoing COVID-19 pandemic. The growing number of deaths has overburdened crematorium workers, who are toiling over 16 hours a day without Personal Protective Equipment (PPE) kits. Despite being exposed to hundreds of bodies of people who succumbed to COVID, those who work at the crematoriums have yet to be declared frontline workers for priority vaccination.

The eastern state of West Bengal has declared that the last rites of all victims of COVID-19 will be carried out free of charge after complaints of fraud by middlemen at crematoriums and burial grounds came to light.

© REUTERS / DANISH SIDDIQUI
People cremate the bodies of victims of the coronavirus disease (COVID-19), at a crematorium ground in New Delhi, India, April 24, 2021

A tired-looking Bishwanath said he cremated 5 people until 1 p.m. A 30-minute lunch break is all the time he has for respite before resuming continuous work until at least midnight. He claims more bodies arrive by the afternoon and at times there are serpentine queues of the bodies for cremation.

“We have never seen so many deaths before. On some days we set up 40-50 pyres. This continues throughout the day and night,” Bishwanath told Sputnik.

Bishwanath only had a mask on his face and claimed that the Kolkata Municipal Corporation has not provided them with any PPE kits.

© REUTERS / FRANCIS MASCARENHAS
Delhi to Use Animal Crematorium Site for Humans as City Struggles to Cope With Rise in COVID Deaths
The city corporation has designated two crematoriums, Nimtala and Dhapa, for funerals of COVID victims. At Nimtala crematorium, the workers can be seen lifting COVID positive dead bodies with bare hands, which exposes them to a higher risk of contracting the virus.

The state's infections peaked from April due to the eight-phase elections where leaders held massive political rallies, ignoring social distancing.

Anuj is a three-generation cremation worker. Born in Haryana, he moved to Kolkata for greener pastures but went back to the same job.

“My family lives in Haryana. I live here alone and travel back and forth. With whatever little we make, it is really hard to provide for my kids. They are in school,” he said while fixing the next pyre.

Workers in crematoriums earn around $100-140 per month. “Earlier people would pay us graciously for the job; now they only give up one or two US dollars. The lockdown has taken money from common people, how will they pay us? The government should vaccinate us on priority. I am the sole breadwinner of my family. What will happen to them if I end up being one of the victims?” rued Anuj.

Raju is a helper at the cremation site. With only a pair of gloves and a single face mask, he pulls dead bodies out of hearses and ambulances.

"At times the hospital vehicles bring four-five bodies together. Some days, 5-6 vehicles arrive within 30 minutes. We are just four people moving the dead. It is becoming impossible to carry out this work,” he added.

He belongs to the “Domba” caste that is routinely subjected to ostracisation in society. He says because of the stigmatisation related to his profession, he can’t move his family to a different area.

© REUTERS / DANISH SIDDIQUI
Delhi Police Find Holes in Gov’t’s Claims on COVID Deaths After Visiting Crematoriums
“I fear for the life of my old mother and wife. We can’t shift anywhere else. No one will rent their houses to us.”

The city corporation, faced with increasing deaths, has decided to upgrade the crematorium facilities.

“We are trying to figure out how to upgrade the infrastructure. We have queues despite all three furnaces burning at the same time. There is tremendous pressure and we don’t know what will happen if the numbers keep on rising. We immediately require more doms since all of them are overworked and tired,” an official said.

With a positivity rate of 27 percent, the state is under complete lockdown until the end of this month.

From Cremating to Tackling the Black Market: Indian Police Go Beyond Call of Duty In Pandemic