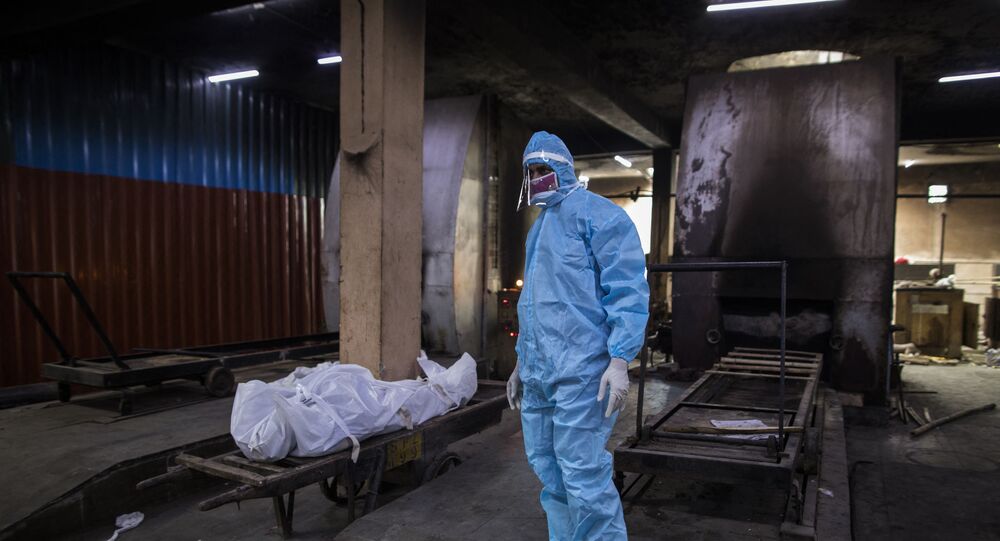 The second wave of Coronavirus is hitting India – leading to a rapid escalation in both, the number of positive cases as well as the number of deaths. On Wednesday, India recorded its highest COVID spike with 184,372 fresh cases and 1,027 fatalities in the last 24 hours. Maharashtra, Gujarat, Madhya Pradesh and Delhi are the worst-affected states.

Amid a rising new tide of COVID deaths, cities in several Indian states are struggling with a shortages of cremation grounds.

The matter began to gain attention earlier this week after the Vadaj crematorium in the city of Surat in Gujarat state dismantled its electric cremation furnace for repairs after it began to melt, overheated from constant use burning dead bodies.

The authorities managing the electric crematorium had revealed to the Indian media that initially, they were handling four to six dead bodies but now, the everyday count has touched and crossed the 20-mark.

© Photo : DP/twitter
Videos: Dozens of Ambulances With COVID Patients Queue Outside Hospital in Ahmedabad, India
Traditional Indian funerals, in which bodies are placed atop a pyre and lit ablaze are time-consuming affairs. Apart from the minimum of two hours that a human body requires to burn to ashes, Indian funerals include a bunch of elaborate customs and rituals to be followed.

The cremation grounds in other parts of Gujarat state have reported a waiting window of eight to ten hours for the dead bodies to be cremated. The situation is so grim that a cremation ground that had stayed shut for the last 15 years in Surat has been reopened by the city administration to cope up with the rise in deaths due to Coronavirus.

#CremationGround that was shut since 2006 opens up again in Surat amid rising death cases.
PC: Gopi Maniar. pic.twitter.com/ezWBI9wrur

© Photo : DP/twitter
Summoning Gods: Ahmedabad's Biggest Hospital Begins 'Yagna' As Dozens of Ambulances Line Up Outside
Relatives and rented vehicles carrying the bodies are lining up outside crematoria under the scorching 42 C sun. Videos of mass cremations being conducted at open grounds in Surat have also surfaced online.

Dear #Gujarat govt:Pl tell us why people are cremating their loved ones in open grounds in #Gujarat. This video is from #Surat and ppl are compelled to do the last rites in open ground coz of huge waiting list at crematoriums. #coronavirus #Covid19SecondWave #GujaratModel? pic.twitter.com/n4JukArD5R

​Under similar circumstances, the central Indian state of Madhya Pradesh is also struggling to bid dignified farewells to its deceased residents.

Bhopal, the capital city of Madhya Pradesh, on Wednesday reported a total of 184,372 new positive cases along with 1,027 deaths in the last 24 hours.

The cremation grounds in Bhopal, that would witness the funerals of up to 10 bodies per day are now handling the long funeral processes of up to 40 corpses.

Locals have also asked the state’s ruling Bharatiya Janata Party (BJP) if they were revealing the correct number of deaths because of the scarce situation regarding cremation land.

This is Bhopal's Bhadbhada Ghat crematorium on Apr 11th

Many bodies were cremated here with with COVID protocol

​Detailing the enormity of death, distressing visuals from the Manikarnika Ghat by the Ganges in Varanasi, an ancient city in Uttar Pradesh, emerged earlier this year. The videos from the particular ghat (river bank), which is also called the “Maha Shamshan” (great cremation ground) show clouds of thick black smoke rising from several burning bodies.

Manikarnika Ghat (Mahashamshan) in Kashi is one of the holiest cremation grounds among the sacred riverfronts, alongside Ganga.

Ghat is named after Sati's earrings which fell here. pic.twitter.com/YUPvttIGTB

​The high number of deaths in several Indian cities have also led to a shortage of mortuary vans. People are renting mini trucks to carry the mortal remains of their near and dear ones for their final journey.

Forget #ambulance #remdesivir #oxygen now there is shortage of mortuary vans in #Ahmedabad as people start brining in the dead bodies of their loved ones in tempos 2 Vadaj crematorium. Of course ⁦@CMOGuj⁩ had said that demand for oxygen has increased as more beds were added pic.twitter.com/73jwrL5oOd

​In a bid to contain the further spread of Coronavirus, several Indian states have imposed lockdowns in different cities, including Mumbai and Delhi.

The country is currently in the third phase of its vaccination drive that first started on 1 February.

Healthcare workers and senior citizens over 65 were required to get vaccinated during the two initial stages of the immunisation process. The third phase that kicked off on 1 April opens the vaccination drive for all people above the age of 45.

Earlier this week, India said it has administered over 100 million doses of vaccines, making it the “fastest country in the world" to do so.