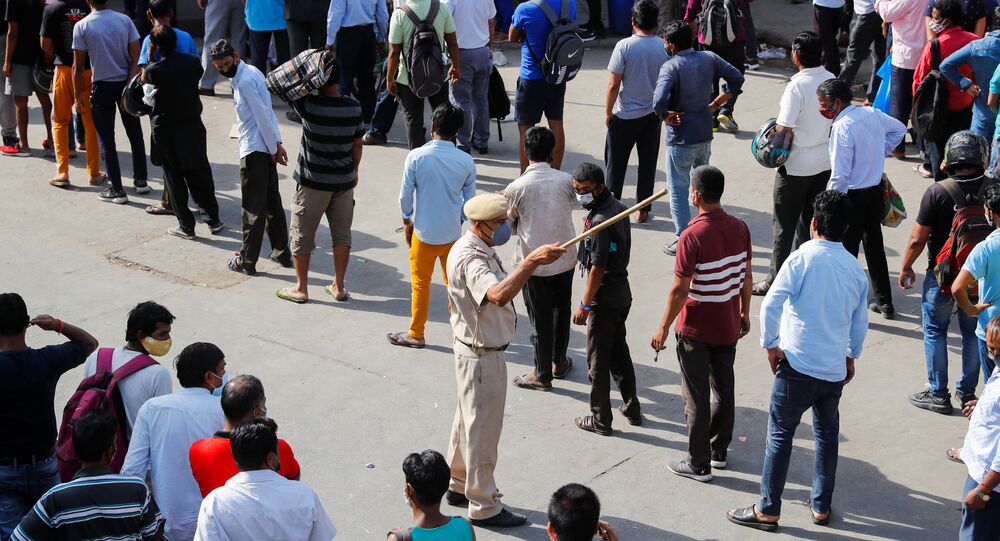 From Cremating to Tackling the Black Market: Indian Police Go Beyond Call of Duty In Pandemic

India has been in the grips of a massive surge in COVID-19 cases as more than 300,000 new infections are registered each day, forcing the state governments to reinstate lockdowns or curfews. On Wednesday, India recorded 362,727 fresh cases and 4,120 deaths from the virus.

Indian police have been at the forefront of fighting the pandemic since it hit the nation last year and have been even more active during the second wave: from ensuring lockdown guidelines are followed, helping senior citizens with hospital admissions and performing last rites to creating green corridors so that oxygen tankers can reach hospitals quickly and setting up special teams to tackle the fraudsters selling COVID-19 supplies on the black market.

Speaking to Sputnik, the PR chief for Delhi Police, Chinmoy Biswal, said that personnel have been working round the clock to help people in need.

"Our control room has been averaging more than 1,000 distress calls a day. We get calls for medicines, senior citizens who need aid, oxygen cylinders, food for those quarantining at home. As soon as we get the call, teams are pressed into action."

In recent days, several police officers have even performed the last rites for people whose bodies were not claimed by anyone or were left unattended.

They are also cracking down on malpractice by ambulance owners and black-marketeering of coronavirus medicines and oxygen across the country.

Explaining how criminals operate, Nishank Sharma, Assistant Commissioner (Sisamau) of the Police in the Kanpur Nagar district, Uttar Pradesh state, said that black marketeers target the vulnerable because they can be cheated easily.

"For example, if a person needs Remdesivir - an injection used during COVID treatment - black marketeers contact them saying they can provide it. Then they dupe them by asking for money in advance. Once payment is made, the marketeers vanish and stop taking any calls from their victims," Sharma said.

We are committed to prevent black marketing of life saving drugs, injections & oxygen cylinders to ensure it’s supply to the needy. In case you have any leads about such black marketeers, please dial 112 or DM us. Your identity will be kept absolutely confidential. #UPPCares pic.twitter.com/wUX0W29GNk

He added that there have been cases of drivers ferrying patients in ambulances and exploiting their misery by demanding a large sum. Police all over the country are trying to catch these cheats.

Over the past month, several states have recovered scores of tablets, injections, oxygen concentrators, oxygen cylinders and found that the black marketeers were selling these essential items at exorbitant prices.

The Delhi Police Commissioner has united with the Director-General of Police in certain states to abolish COVID-19 fraudsters. Strong teams from Crime, Cyber Prevention, Awareness & Detection Centre (CyPad) and districts were sent to locate and dismantle the infrastructure of conmen.

On Tuesday, Delhi Police revealed that they had registered 372 cases against COVID-19 cheats, arrested 91 people, seized 95 devices and frozen more than 200 bank accounts.

Delhi Police said they have adopted a strategy in which the citizens are being helped to lodge complaints easily at helpline and portals.

"There was a sudden and substantial change in the nature of distress calls being received, with COVID-19 cheats becoming the most important among all others in the past 15 days. Delhi police increased the capabilities of the helpline for such purposes overnight."

A senior police official Haryana state also revealed on condition of anonymity that analysis of registered cases and complaints indicated that although a majority of dodgy SIM cards were subscribed and sourced from one state, they were being used in another state.

"The accounts at which the SIM users were receiving their ill-gotten gains are scattered all over the country - states such as West Bengal, Bihar, Maharashtra, Madhya Pradesh and Karnataka - and appeared to be highly affected by the presence of this cybercriminal network," the officer said.

Several states are even carrying out awareness campaigns to educate people so that they do not get cheated.

In three states - Uttar Pradesh, Bihar and Madhya Pradesh, the police department have been given extra responsibility to investigate cases where bodies of suspected COVID-19 patients have been found floating in rivers.

India in Need of Oxygen, Plus Guest Author David Horowitz