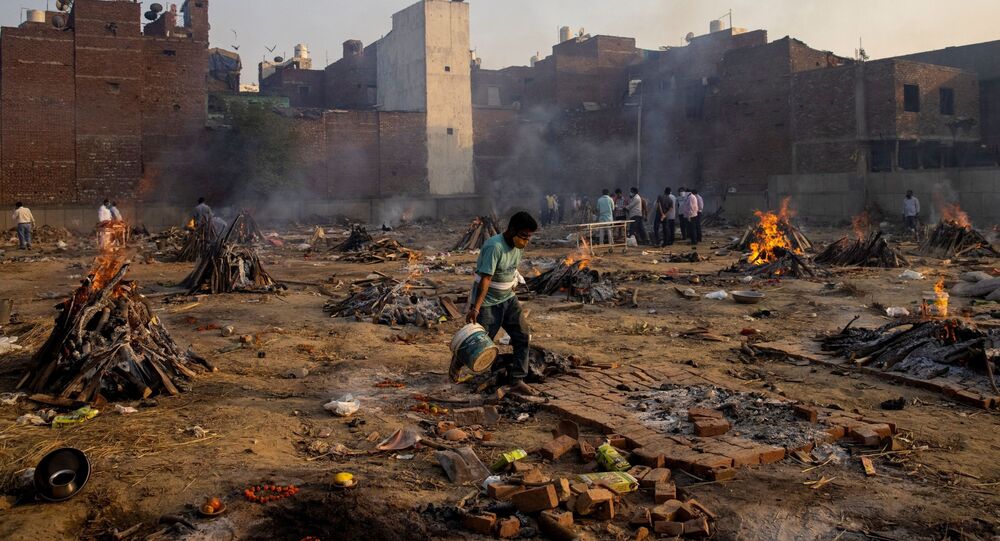 Facing a surge in COVID infections, Indian authorities are grappling with shortage of medicine and equipment. Amid rising domestic anger, a tweet by Washington Post bureau chief Annie Gowen describing an aerial photograph of burning pyres of bodies as “stunning” has hit a raw nerve among many Indians, who say the post is “insensitive”.

A high-profile Indian activist group, known to be close to Rashtriya Swayamsewak Sangh (RSS) and India’s governing Bharatiya Janata Party (BJP), has demanded the expulsion of American journalist Annie Gowen, the Indian bureau chief of the Washington Post, for describing a picture of a COVID-designated crematorium as "stunning".

The RSS is the ideological parent of the BJP.

The Legal Rights Observatory (LRO) said on its Twitter account on Friday that it has called upon the federal home minister Amit Shah and the external affairs minister (EAM) to expel Gowen from the country.

Wrote @AmitShah @DrSJaishankar seeking immediate expulsion of @anniegowen, India bureau chief @washingtonpost & declare her a "Persona Non-Grata" for mocking deaths of hundreds of people in the #Covid19 pandemic. Her behaviour is a real-life case example of unethical Journalism. pic.twitter.com/ph7sRMMt7U

​The controversial tweet by Gowen describes a drone photograph of burning pyres at a crematorium in India’s national capital as “stunning”. Gowen’s social media post on Thursday cites a picture by Reuters photographer Danish Siddiqui.

Gowen’s caption has faced scathing criticism in the South Asian nation, which is currently battling a devastating second COVID wave, having recorded over 300,000 new daily infections for two consecutive days.

Dear Annie, I don't think the adjective "stunning" is used to describe or express emotion, feelings of anxiety about  grave situation. This is a human pyre burning that brings tears in our eyes, not spectacular or magnificent scene that excites us, right?

The are rejoicing the deaths of us heathen nonbelievers, nothing more is expected from WaPo and its owner Amazon. https://t.co/gdhFnueIFd

​India set a grim new global record on Thursday after reporting over 315,000 new infections, the most any country has recorded since the beginning of the ongoing COVID epidemic. India's overall caseload is just over 16.2 million and it has recorded COVID fatalities estimated to be over 186,000, according to the federal health ministry.

Meanwhile, the national capital of Delhi, where the picture re-tweeted by Gowen was taken, is one of the worst-hit Indian regions, amid the second wave. Delhi’s positivity rate has been found to be over 30 percent for the last two days, which means that one in every third person tested for COVID returned positive results.