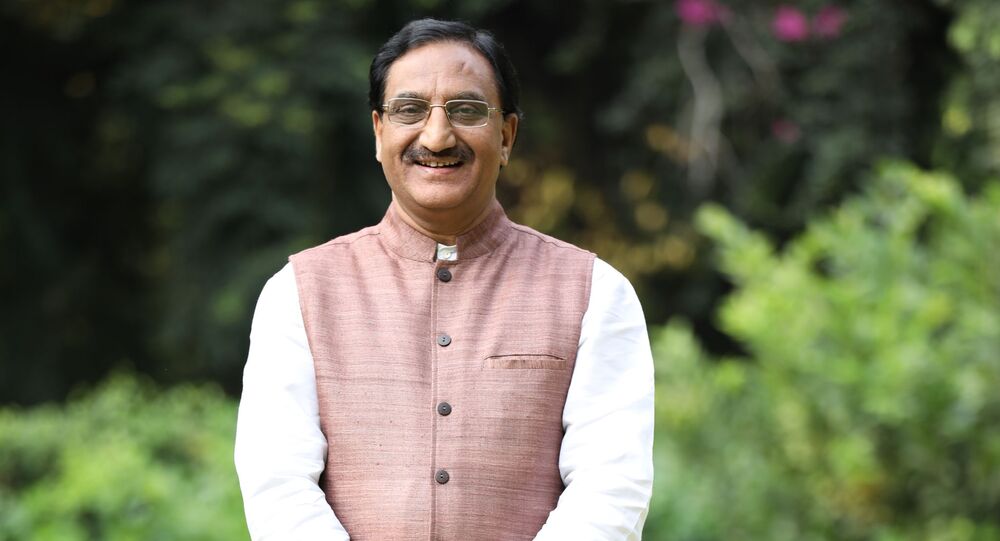 Indian politicians, including members of the Bharatiya Janata Party (BJP), have received a lot of flak recently for organising public events and election meetings as the country copes with a fresh wave of COVID-19. India has registered more than 100,000 cases per day for four days in a row.

India's federal education minister Ramesh Pokhriyal went to an awards ceremony on Sunday organised by the All India Council for Technical Education (AICTE), a day after authorities in Delhi imposed a ban on public gatherings to check the spread of COVID-19 infections.

As per existing #COVID19 rules, public gatherings in Delhi are prohibited to check the spread of infections.@ArvindKejriwal @AICTE_INDIA pic.twitter.com/RvXyuYAuIx

​Pokhriyal revealed the event - which was to hand out Lilavati Awards to those who have done something outstanding to promote female empowerment - on his Twitter account on Sunday morning. India’s federal minister for textiles and women and child development Smriti Irani was also meant to attend the event.

I along with my esteemed colleague Hon’ble Minister of Textiles and Women & Child Development Smt @smritiirani ji will be attending @AICTE_INDIA’s Lilavati Award Distribution Ceremony Today at 4 PM. pic.twitter.com/AoFfAwvSwL

​However, she pulled out at the “last minute” because of reservations over the present COVID-19 situation, sources at the venue said.

All public gatherings in Delhi were banned on Saturday by the state authorities, in a bid to check the rising number of infections. The national capital recorded more than 10,000 cases on Saturday, setting a new daily record.

According to the revised rules issued by the Delhi Disaster Management Authority (DDMA), all social, religious, cultural, educational, entertainment, sports and festival-related gatherings have been temporarily banned across the national capital.

Authorities have imposed a ban on the number of people who are allowed to attend a funeral or a wedding reception.

People travelling by air from Maharashtra to Delhi have to compulsorily carry a negative RT-PCR test done 72 hours prior to arrival. If found without report, have to remain in quarantine for 14 days: Delhi Disaster Management Authority, Govt of NCT of Delhi pic.twitter.com/fywDA8Fvqw

​During a video briefing on Sunday, Delhi state chief Arvind Kejriwal said that the surge in COVID-19 infections in the Indian capital was by far the “worst” of all the waves.

“On Saturday, Delhi recorded 7,897 new cases and on Friday 8,521 new cases. It shows how fast the disease is spreading now. The situation is concerning and we are closely monitoring it,” said Kejriwal.

Pokhriyal’s attendance at the public function comes hours after his boss and India’s Prime Minister Narendra Modi kicked off the ‘Tika Utsav' (vaccine festival), as part of which he has urged all Indian citizens to practise social and public hygiene as well as follow prescribed rules.

In recent days, senior figures of the ruling Bharatiya Janata Party (BJP), including PM Modi, have themselves come under attack for holding election meetings in the states of West Bengal, Tamil Nadu, Kerala, Assam and the union territory of Puducherry. The South Asian country is at present experiencing a devastating second COVID wave, registering more than 100,000 cases for the fourth day in a row.