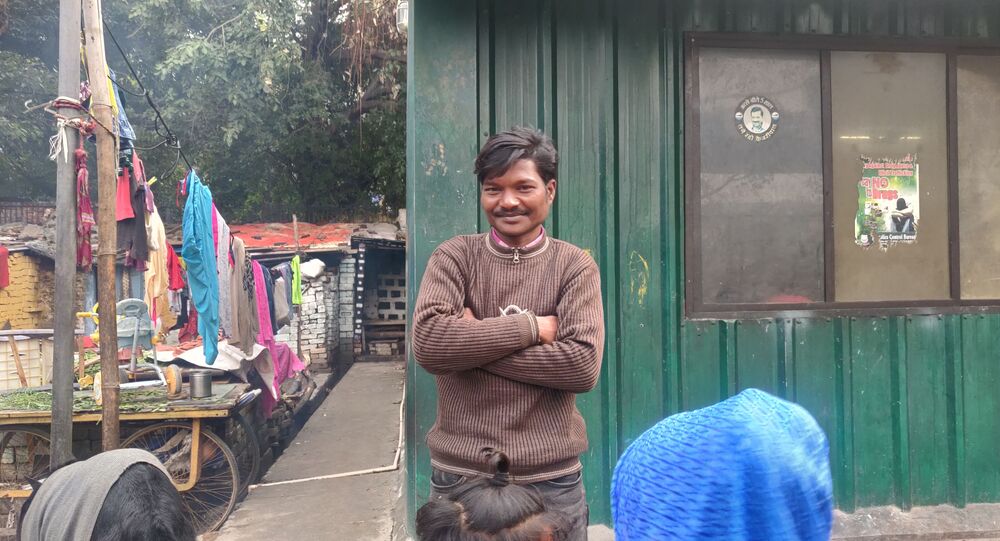 Earlier this month, India kicked-off its COVID vaccination drive. An estimated 300 million healthcare and frontline workers will be inoculated in order of priority, followed by those above 50 and under 50 with comorbidities.

As social stigma has stung the homeless hardest in India, thousands are eagerly awaiting the free vaccination to reach them, so that they can reintegrate into society.

"If we get the vaccine, at least we will not be treated as untouchable", Sonu, a homeless man, who lost his job as bus ticket collector, lamented.

Sonu is seeking help from the government to treat homeless individuals on a priority basis when it comes to vaccination.

According to him, he was earning something around $5-6 a day before the outbreak of the pandemic last year.

© REUTERS / ADNAN ABIDI
'It is the Beginning of the End': Director of India’s Premiere Medical Institute on Mass Vaccination
"But now employers are not giving any work to the homeless because they believe that we are COVID-19 carriers. It has been ten months since I earned a penny", Sonu told Sputnik.

Sonu is one among 1.77 million homeless people who have been promised shelter over their heads by 2022 by the Narendra Modi government. As per the 2011 census, around 256,000 people are living as homeless in urban India. Nevertheless, the decadal growth showed a grim situation in urban areas, with a jump of around 36 percent in homelessness between 2001-11. It is estimated that this trend might have accelerated following the economic crisis in the country.

Since a COVID-19 vaccine was rolled out in the country, social activists have urged the government that homeless people should get vaccinated on a priority basis.

"Homeless people have weak immunity and are more exposed to the coronavirus after healthcare and frontline workers", Sunil Kumar Aledia, founder of the Centre for Holistic Development (CHD) and a social activist working for homeless people, told Sputnik.

vaccine can be delivered to the homeless via government-owned and government-approved shelter homes and welfare institutions in Delhi https://t.co/moS2Y0exFz

"People living in the streets begging for food are more vulnerable than others. Since the outbreak of the pandemic they have suffered the most", Aledia said.

Not all homeless individuals in urban areas are vagrants or destitute. The census of India classified one out of five individuals as beggars and destitute. As per the government data, the remainder of homeless people constitute migrant workers and nomadic tribes.

The World Health Organisation, while suggesting social distancing and using masks to curb the spread of the pandemic, said that the government should take care of homeless people more during this period. Last month, the Delhi High Court expressed concerns about the plight of the homeless and the conditions in shelters while hearing a petition filed by an NGO, the Delhi Rozi Roti Adhikar Abhiyan.

Delhi Rozi Roti Adhikar Abhiyan stressed that homeless people are experiencing economic distress due to the pandemic, and therefore, the government should continue the supply of dry rations to persons without proper documents.

The Centre for Holistic Development (CHD) has also written a letter to Delhi Chief Minister Arvind Kejriwal and federal Health Minister Dr Harshvardhan requesting them to prioritise the homeless and migrants for vaccination.

"Let's see if they take cognisance of our request", Aledia added.

The vaccine can be delivered to the #Homeless via government-owned and government-approved shelter homes and welfare institutions in Delhi. @ArvindKejriwal@SatyendarJain@CHDIndia @nirbhayjivan@IGHomelessness@HomelessDay#COVID19Vaccination pic.twitter.com/xX6EmFoTdF