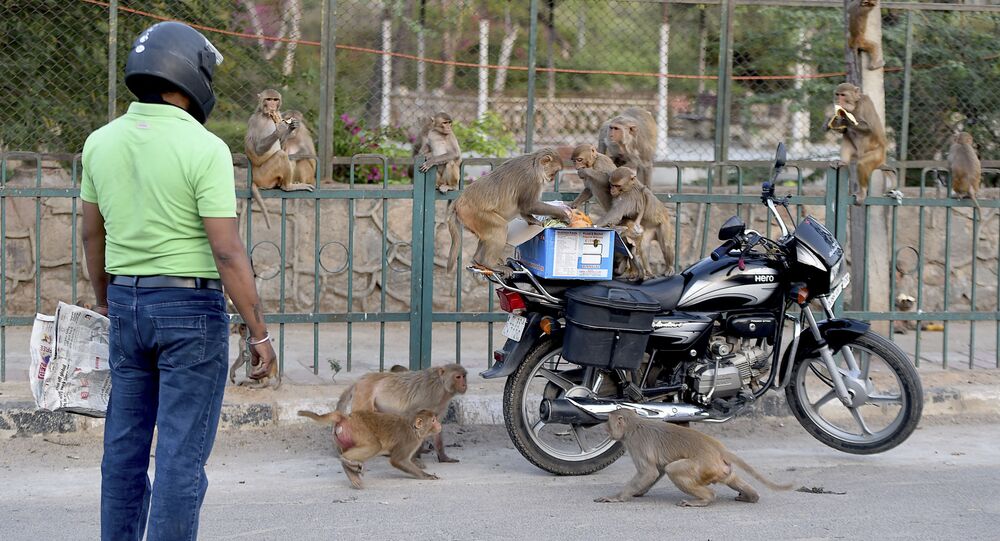 On 2 March, a lawyer approached the Delhi Police and reported that three men carrying monkeys had surrounded and forcefully robbed him, taking INR 6,000 ($80).

Delhi Police have arrested two men for robbing people with the help of monkeys, officials said on Friday.

Speaking to Sputnik, Deputy Commissioner of Police (South) Atul Kumar Thakur said the accused - Balwan Nath (26) and Vikram Nath (23) - were nabbed on Thursday for their involvement in robbing a lawyer on 2 March.

"On 2 March, the advocate in his complaint had alleged that he was sitting in an auto-rickshaw, when three men (the two arrested accused along with their associate Ajay) made the monkeys sit inside the vehicle with one in the front and the other in the back seat and demanded money from him. When the advocate took out the wallet, the duo robbed him and escaped," Thakur said.

Following the complaint, a case was registered under Indian Penal Code Sections 392 (punishment for robbery) and 34 (acts done by several persons in furtherance of common intention) and since it was a peculiar incident involving monkeys, a dedicated team was constituted to nab the culprits, police said.

"The team scanned through several CCTV footages and conducted raids in and around Delhi based on inputs from sources and informers. On Thursday, it apprehended two people along with the two monkeys," Thakur said.

During interrogation, the duo confessed to their involvement in the incident along with their associate Ajay who is absconding, the officer said, adding that the accused had caught the monkeys in the Tughlaqabad Fort jungle in Delhi around three months ago.

"The two monkeys have been deposited with a Wildlife SOS centre and relevant provisions of the Wildlife Protection Act, 1972 were added against the accused in the case," he said.