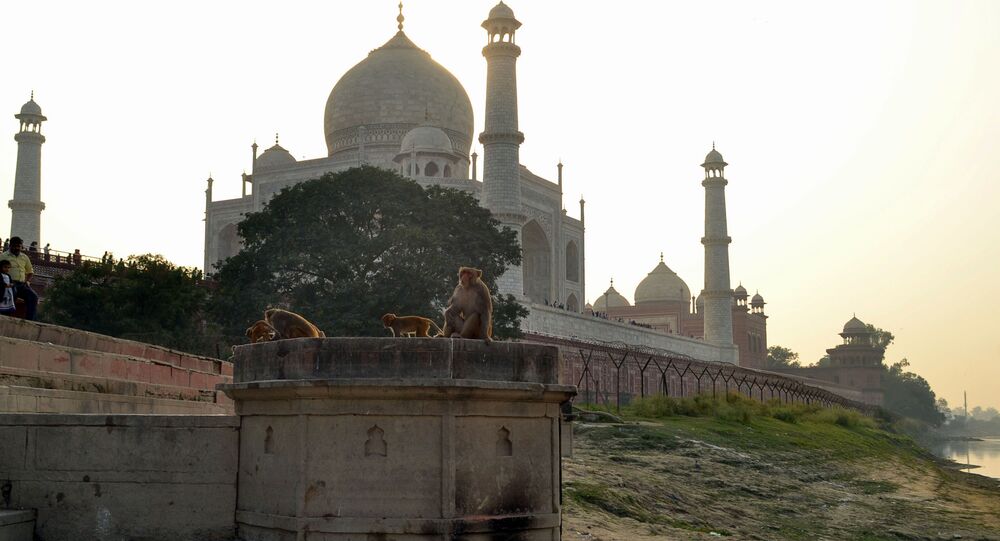 Armies of thousands of monkeys roaming free in the Indian state of Uttar Pradesh remain a major cause of concern for authorities, especially in Agra where the iconic Taj Mahal stands. Foreign and local tourists who come to visit the monument symbolising "eternal love" often become the victims of these moneys, who snatch, bite, and sometimes kill.

Two people were crushed to death after a wall of an old house under repair collapsed when armies of aggressive monkeys fighting for territory damaged the house in Agra, Uttar Pradesh.

According to the local police, over 35 monkeys were involved in a furious showdown on Monday evening when the labourers and owner of the house stood near the wall. The simians in the brawl then jumped on the wall bringing it down.

© REUTERS / RUPAK DE CHOWDHURI
Time to Moove Out: After Monkey, Stray Cattle Removed from Taj Mahal Ahead of Trump Visit
The incident has left locals, who are demanding action by the administration to curb the simian nuisance in the city, enraged. People have been asking the authorities to shift the monkeys from cities to forest areas in the wake of fatal attacks.

In 2018, a 12-day-old baby boy was snatched by a monkey from his mother's lap and was killed in Agra.

Rampaging monkeys have kept ordinary people as well as the authorities on their toes to devise strategies to keep them away from cities. Similar efforts were made to keep the rosy-bottomed primates in check ahead of US President Donald Trump's visit to the Taj Mahal on 24 February.