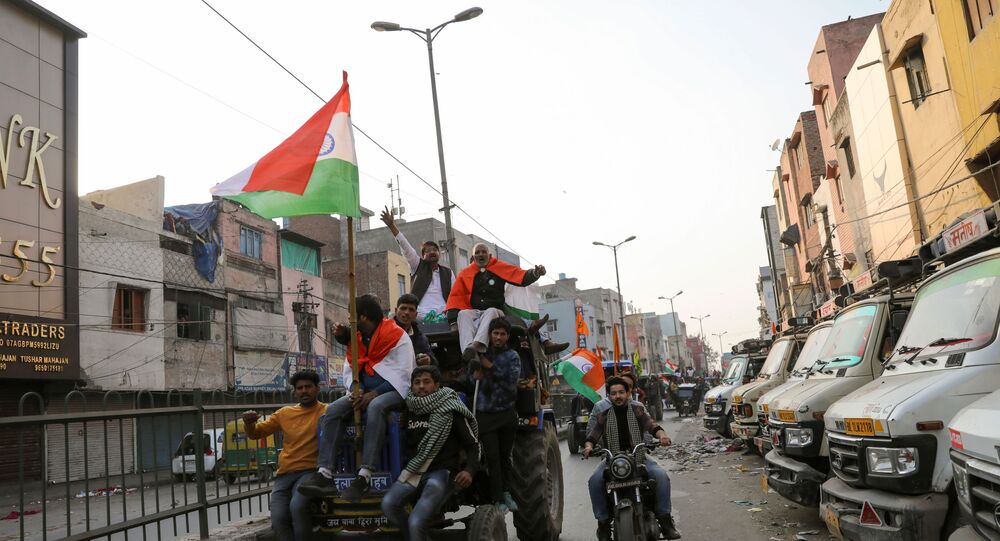 Farmers' Protests in India: Digital Toolkits Not a Crime, But a Way to Raise Awareness, Analysts Say

On Saturday, Indian environmental activist Disha Ravi was arrested by Delhi Police for editing two sentences of a toolkit shared by Swedish eco-teen Greta Thunberg. According to police, the online toolkit was designed to aide the ongoing farmers' protests in India.

The arrest of Disha Ravi for allegedly editing a protest "toolkit" which was tweeted – and later deleted – by Swedish activist Greta Thunberg has fuelled unrest in India.

The toolkit was shared by Thunberg earlier this month amid the ongoing farmers' protests on the outskirts of Delhi – the document called for people to coordinate both online and offline to support the farmers through various means, including protesting outside embassies and the homes of prominent businessmen.

The Delhi Police Cyber Cell is now investigating an "international conspiracy" to destabilise India. The toolkit has triggered a huge public debate on social media among activists about how to support protests.

According to social media experts, toolkits or resource kits are often employed by political parties, advocacy groups, entertainment industries, and even international organisations including the United Nations to carry out social awareness campaigns and more.

"These are paperless campaigns in the digital format to grab attention. It could be anything from tweets or posts using similar hashtags, images, cartoons, video clips, Facebook live events, influencers or social media people posting about the campaign," the social media campaigner said.

Ashmita Ghosh, a communication specialist for digital Aadvocacy programmes, said, "Last year the Centres for Disease Control and Prevention and the United States National Public Health Institute carried out a digital awareness programme where they ask influencers to aware people about the Covid-19."

Condemning the arrest of activist Disha Ravi, she said, "Toolkits are not a criminal conspiracy; rather, it is a way to raise social awareness."

"Everyone has the right to speak out and share their view on any issues. Lots of Indians on social media express their views on Black Lives Matter campaign. Similarly, #MeToo movement went worldwide," she stated.

The #MeeToo movement first began in 2017 in the United States. It has gained momentum in India after several journalists, filmmakers, actors, models, sportswomen, and artists came forward to share their stories of sexual harassment and misconduct on social media in the last few months.

"There can be several ways that a person can take part in any activism. The toolkit is just a way to suggest, and this doesn't mean that the integrity of a movement is compromised," Ghosh added.

Mass protests hit India last year when PM Narendra Modi adopted new farm laws in a bid to liberalise the country's agriculture market. Thousands of farmers have been protesting against the trio of farm laws on the outskirts of Delhi since November.

In recent weeks, the government has warned foreign celebrities and politicians against commenting on the protests.