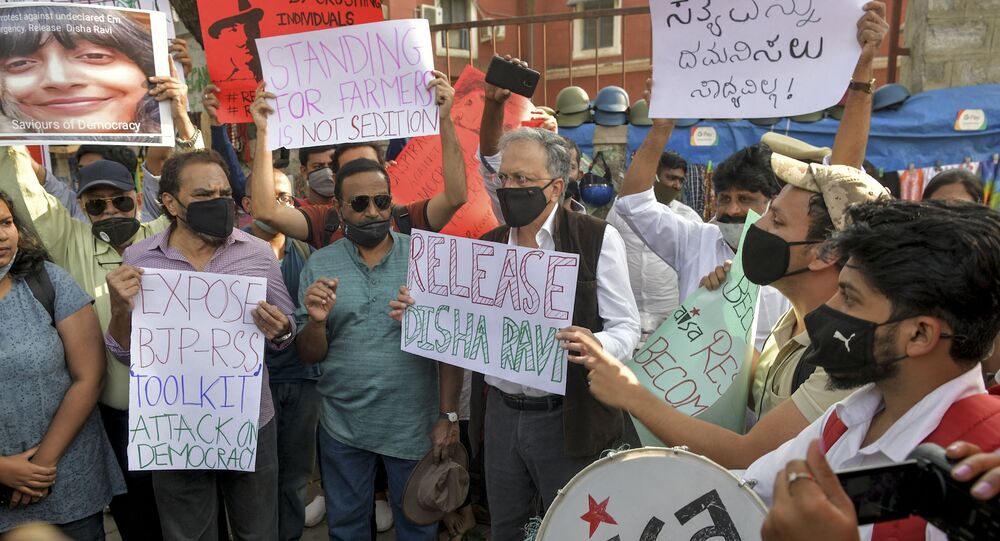 Over the past 5 years, 233 people have been slapped with charges of sedition, including cartoonists, activists, and students under the Narendra Modi-led government in India.

A numbet of sedition cases have recently been filed against Indian parliamentarian Shashi Tharoor, senior journalists Rajdeep Sardesai, Mrinal Pande and others for sharing "unverified" news during the farmers’ tractor rally in the Indian capital city of Delhi on 26 January that turned violent after a group of protesters breached the iconic Red Fort.

The farmers' protests have received much attention around the world over the past few weeks, with Rihanna and Greta Thunberg tweeting in support of the agitation.

Here's a list of incidents that have led to a number of sedition cases being filed against Indian citizens over the past several years.

The police have arrested 22-year-old climate activist Disha Ravi in connection with an investigation into a "toolkit" tweeted -- and later deleted -- by Swedish eco-teen Greta Thunberg at the height of the farmers' protests.

© REUTERS / DANISH SIDDIQUI
India Continues to Hunt Down Activists Who Shared 'Greta Thunberg Toolkit’ Amid Political Outrage
It is being reported that she shared a document that was meant to give tips to protesting farmers and their supporters, with calls to stage demonstrations outside Indian missions around the globe, among other things. A police probe has also suggested that similar complaints have been filed against Nikita Jacob and Shantanu Muluk -- two other activists.

According to law enforcement, the organisation behind the "toolkit" shared by Thurnberg - Poetic Justice - had contacted Nikita to organise a "tweet storm" ahead of the Republic Day protest by farmers. This organisation is reportedly a pro-Khalistani group, the police say.

The Khalistan movement is a Sikh separatist movement seeking to establish a homeland for Sikhs by creating a sovereign state in Punjab.

disha ravi, a 21-year-old climate activist, has been arrested by delhi police for sharing a toolkit @GretaThunberg posted in support of the #farmersprotest.

disha’s arrest is alarming and the world needs to pay attention. #freedisharavihttps://t.co/IYGsLpNjwZ

Several journalists have also been arrested for allegedly conspiring against state governments. Siddique Kappan, a reporter from a Malayalam news portal, was detained while he was on his way to cover the gruesome gang rape and murder of a Dalit teenager in the Indian state of Uttar Pradesh. Commenting on Kappan's arrest, state police said they had acted on a tip about "suspicious people". In the complaint, police allegedly accused him of attempting to cause trouble while pretending to be a journalist.

A 39-year-old television journalist from Imphal, Kishore Chandra Wangkhem was detained for over a month without bail in 2020 for responding to a viral social media post. The post that he had replied to was by a wife of a BJP politician. Wangkhem’s post reportedly was a derogatory comment and a "racial slur” about the politician’s wife. Before the journalist’s comment, the thread also carried a post that was made by a Meitei woman (an ethnic group from the state of Manipur) who was close to the politician, while the wife of the politician belongs to a different ethnic group - the Maram community. His comments were considered objectionable and he was charged with inciting enmity between two communities.

© AP Photo / Rafiq Maqbool
Activist Disha Ravi's Arrest Over 'Greta Thunberg Toolkit' for Farmers' Protests Blows up Twitter
This was the second time Wangkhem was arrested. He was earlier held in 2018 on charges of sedition, for commenting against the RSS, Manipur state chief N. Biren Singh and Indian PM Modi, but the court had quashed the charges against him in the first case in 2019.

Independent journalist Prashant Kanojia who used to be a reporter with The Wire Hindi was arrested twice for his tweets, which the government deemed seditious. His tweet was reportedly on the Ayodhya Ram Temple in the state of Uttar Pradesh and the police had alleged in its complaint that Kanojia’s tweet had threatened law and order. The court however, ordered his release from jail.

There have been dozens of cases against other journalists, including: Rajib Sharma, Dhaval Patel, Naresh Khohal, Rahul Kulkarni, Rajeev Sharma and Tsewang Rigzin for similar charges.

During the protests against the Citizenship Amendment Act that were held from December 2019 to January 2020, thousands of people across India were slapped with sedition cases. At least 600 members of the Hyderabad-based All India Majlis-e-Ittehadul-Muslimeen group (AIMIM) were booked for sedition and another 200 for rioting.

© REUTERS / Danish Siddiqui
Family of Youth Who Shot at Indian CAA Protesters Claim He Isn't Linked to Any Radical Group
In a similar case of violence, Jawahar Lal University student Sharjeel Imam was booked for sedition for his role related to the violence during protests against the Citizenship Act in December 2019.

In the same protests, sedition charges were filed against more than 3,000 people in Dhanbad city in the Indian state of Jharkhand.

The Citizenship Amendment Act, approved by Parliament on 11 December 2019 provides citizenship to refugees from six minority religious communities from Bangladesh, Afghanistan and Pakistan, provided they have lived in India for six years and entered the country by December 31, 2014. The Act has been widely criticised for excluding Muslims.

SP(City) Dhanbad directs SHO to file a correction application in the Court to remove sedition charges earlier invoked against more than 3,000 people, who were protesting against the Citizenship Amendment Act.

In 2018, there was a large gathering at Bhima Koregaon in the Pune district of the Indian state of Maharashtra to mark the 200th year of a battle between British Army and an army led by a Maratha king.

During this celebration, there were violent clashes between two groups that led to two deaths and the injury of several people. After the police investigation into the incident, several activists were arrested for their alleged "Maoist links". The police alleged that these activists had made inflammatory speeches that led to the violence.

Activist Sudha Bharadwaj was arrested on August 28, 2018 in connection with the Bhima Koregaon case. Her bail has been turned down by a top court, which was filed on medical grounds. It was alleged that she played a role in an incident of caste-based violence and had Maoist links.

Poet-writer and activist Varavara Rao was jailed in 2018 for his alleged involvement in the Bhima-Koregaon violence. Police claimed that speeches delivered by activists at the event were partially responsible for inciting the violence. Other activists arrested in the same case were Rona Wilson, Arun Ferreira, Gautam Navlakha and Anand Teltumbde.