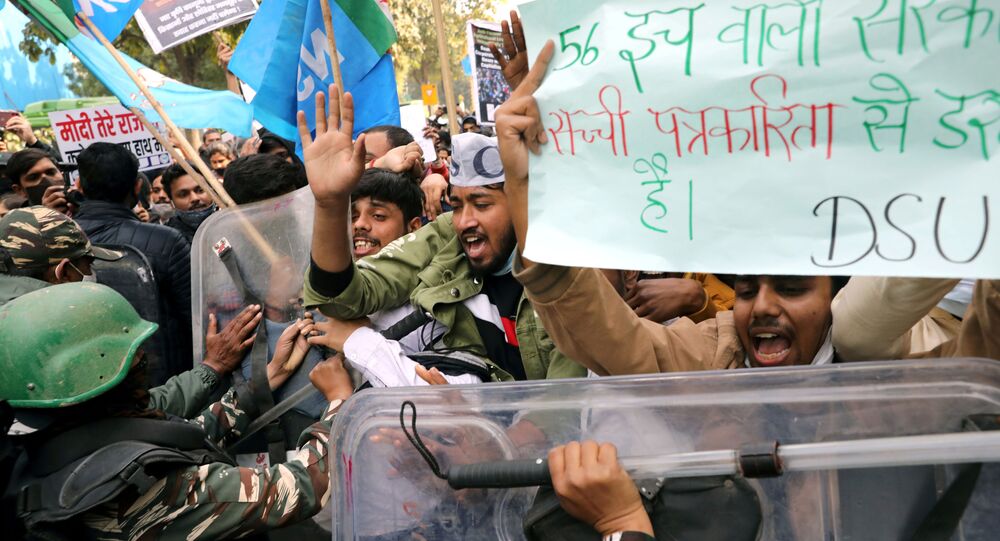 Since November, 2020, farmers, mainly from Punjab and Haryana states, have been protesting on the outskirts of the Indian capital city against new farm laws. They have blocked roads in India's Uttar Pradesh and Haryana states to push for a complete rollback of three laws that would partially liberalise the market for produce.

Over 140 lawyers have urged India's Chief Justice Sharad Arvind Bobde to take a suo motu cognisance of the suspension of Internet services in parts of the Delhi National Capital Region.

In an open letter, the lawyers also requested restraining the central government from imposing further shutdowns at the protest sites and the adjoining areas.

"Access to the Internet is a fundamental right under Article 19 of the Indian Constitution", the letter drafted by advocates Sitwat Nabi and Abhisht Hela states.

A group Of 141 Lawyers Writes To chief justice of India Seeking Suo Motu Cognizance Against Suspension of Internet Services in Parts of Delhi-NCR, Amidst Farmers Protests@SputnikInt pic.twitter.com/xZtWzIcsM5

"As internet services remain suspended in and around the protest venues and its adjoining areas for the sixth consecutive day, farmers are rightly convinced that their voices are being shunned down and only one-sided narrative of the government is being pushed forward, which is a clear attack on the fundamental values of the Constitution", the letter, signed by 141 lawyers and obtained by Sputnik, further reads.

After the violent clashes between protesting farmers and the Delhi Police on India’s Republic Day, on 26 January, the federal Home Ministry has ordered the temporary suspension of the Internet in several parts of the Delhi-NCR since 29 January, including all three farmer protest sites - Singhu, Tikri, and Ghazipur.

The farmers have been protesting against the Farmers (Empowerment and Protection) Agreement of Price Assurance and Farm Services Act, 2020; the Farmers Produce Trade and Commerce (Promotion and Facilitation) Act, 2020, and The Essential Commodities (Amendment) Act, 2020. They believe that the new laws would pave the way for dismantling the minimum support price system (MSP) as part of the state procurement of their harvest, leaving them at the mercy of big agribusinesses.