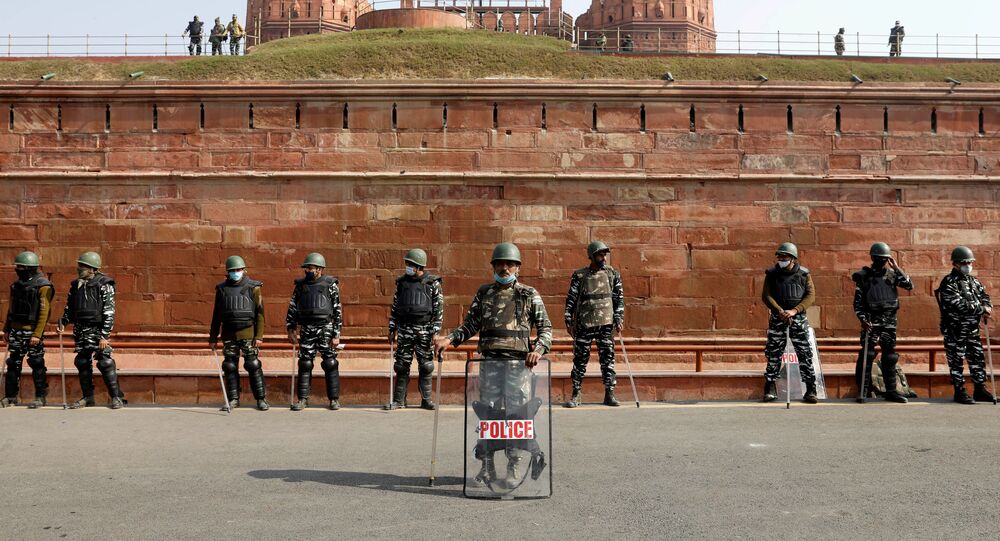 Since 26 November 2020, farmers from the states of Punjab, Haryana, and Uttar Pradesh have been protesting on the outskirts of India's capital city, mainly demanding the repeal of three new farm laws passed by parliament last September to liberalise the market for farm produce.

From the heavy deployment of security personnel armed with weapons to cemented barricades with barbed wire and roads layered with spikes and nails, visuals from the protest sites at Delhi's Ghazipur, Tikri, and Singhu borders have spread like wildfire on Indian social media, leaving netizens shocked.

Security has been tightened on Delhi's borders to stop farmers and tractors from entering the national capital days after clashes between protesting farmers and the police occurred during a tractor rally on India's 72nd Republic Day at the iconic Red Fort.

With the hashtag #FencingLikeChinaPak, netizens have taken to social media sharing their reaction as they compare the sight with the India-China or Pakistan borders.

These ain't scenes from Indo China or Pak Border BUT Modi Govt is gearing up to take on Indian Farmers. #FencingLikeChinaPak pic.twitter.com/uVkx6i8BRY

Patrolling the most dangerous borders that exist in the eyes of the govt. State of the art weaponry to attack infiltrators mercilessly. Road blocks of concrete and spikes built virtually overnight. CHINA, watch our might against our aged, fatigued farmers and tremble.... pic.twitter.com/qyI3Urqo69

​While many Bollywood celebrities and netizens have been slamming the government for creating a war-like situation, some locals shared that workers had erected cemented roadblocks and plastered nails overnight on 1 February.

This is not the indo-china border. Unbelievable. https://t.co/RWeeLaSCUE

Soon they will be living in an Island of Fear. Truth does not need walls. The PM should come, talk to the farmers. But well we don't like dialogue. #mannkibaat is all about monologue. If the laws were good then have the courage &conviction to convince them with logic, NOT FORCE. https://t.co/4z0HGriSAi

Wall on Highway ...
Trench dug up off the road ... Cement Barricades hooked with Iron Rods ...
Security personnel from Paramilitary Forces & Police ...
No Internet ...
This is how Govt has NOW prepared to deal with #FarmersProtest at Singhu, Tikri & Ghazipur Border.
WHY ? pic.twitter.com/gK4l6e9plJ

​​It's very disturbing to see blockades at the singhu border. This should not have happened. Have some dignity @AmitShah . This is delhi not international border. @HMOIndia pic.twitter.com/ZbhKG78VQg

For a moment I thought this is fortification at the international border... 😳🤔

​​Meanwhile, farmer unions are planning to block both national and state highways on 6 February between 12 and 3 p.m. to protest against an internet ban near their agitation sites, the disconnection of water and power supply, alleged harassment by authorities, and other issues.

​They also alleged that farmers have been "ignored" in the Union Budget 2021-22 and many of their Twitter accounts have been restricted.

Over 37 farmer leaders have been charged by Delhi Police in 44 police complaints for attempted murder, rioting, and criminal conspiracy during the Republic Day clashes that left one tractor-riding protester dead and as many as 394 police personnel injured.