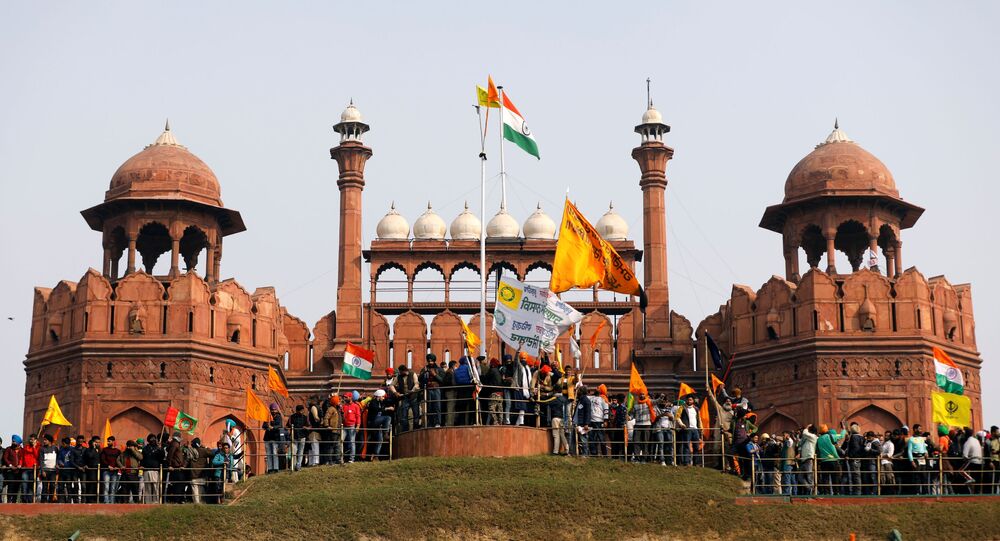 On 26 January, India's national capital Delhi witnessed violence at the iconic Red Fort on the occasion of the country's 72nd Republic Day. During the farmers’ tractor rally, police and protesting farmers clashed at different places in the city, leading to around 400 law enforcement personnel being injured.

Delhi Police on Wednesday announced a cash reward of INR 100,000 ($1,350) to anyone who shares information about the whereabouts of actor Deep Sidhu, involved in hoisting flags at the Red Fort on Republic Day.

Speaking to Sputnik, a senior police official said that Sidhu has been named as a main accused in the violence that unfolded after farmers held a tractor rally in different parts of Delhi.

"Apart for Sidhu, we have announced the same reward on his two associates - Gurjot Singh and Gurjant Singh, and Jugraj Singh. Since the incident, the accused have been absconding while teams are conducting multiple raids in Delhi and Punjab to look for them", he said.

The officer also revealed that they are looking for protesters identified as Jajbir Singh, Buta Singh, Sukhdev Singh, and Iqbal Singh as preliminary evidence suggests their involvement in the large-scale violence in the city. A reward of INR 50,000 ($680) for each was also announced for information on them.

© REUTERS / ADNAN ABIDI
Violence, Death & Invasion of Delhi: Here's How the 72nd Republic Day Unfolded in India’s Capital
So far, the Delhi Police have registered 44 cases and arrested 122 people involved in the violence on Republic Day. Several farmer union leaders have been named in the police cases.

Farmer unions alleged that it was anti-social or fringe elements like Sidhu who instigated protesters and turned the peaceful agitation violent.

However, soon after the allegations, Sidhu posted on his Facebook page videos from an unknown location in which he can be seen crying and expressing his anger against the farmer unions and Punjabis for branding him a "traitor".

"I have raised the voice of Punjab and its people. I was branded a traitor. There were half a million people at the Red Fort, including singers and leaders, but only one (I) was singled out", Sidhu said.