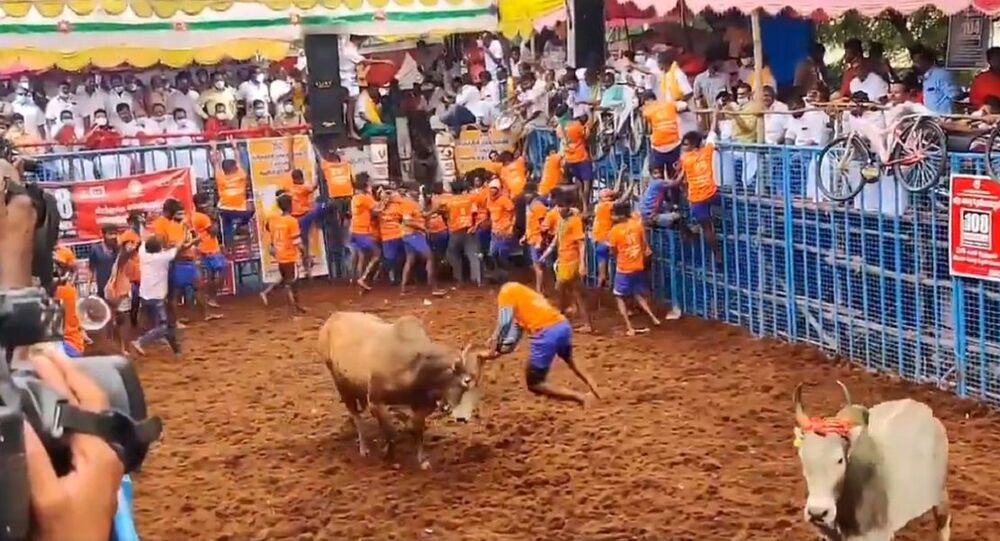 The ancient sport is believed to have first been practised over 2,500 years ago. However, over the years, the famous event of Jallikattu has resulted in major injuries and even deaths, and thus evoked concerns among animal lovers.

'Jallikattu', the traditional bull-taming sport native to the state of Tamil Nadu in southern India, kicked off on Thursday amid strict safety guidelines amid the Covid-19 pandemic.

The event is being held in Avyapuram, in the state’s Madurai district, as locals celebrate Pongal, a four-day harvest festival dedicated to the Sun God.

As per the directives, the number of players cannot be more than 150 and all of them have to carry a COVID-19 negative certificate to participate in the event, which involves taming bulls who are set free on a fenced street.

The number of audience cannot exceed half of the total number of participants, with all of them required to wear masks.

The term Jallikattu is derived from the Tamil words 'Jalli' and 'Kattu', with Jalli meaning gold or silver coins, and Kattu meaning 'tied'.  When put together, the words refer to coins being tied to the bulls' horns, and are the prize for whoever successfully tames the bull.

The winning bull is later used for further breeding purposes.

Meanwhile, Rahul Gandhi, a key opposition leader of the Congress party, also visited the state to attend the popular bull-taming sport. His own party is known to have practically banned the sport 10 years ago.

Before arriving, Gandhi tweeted "Happy Pongal to all. I am coming to Tamil Nadu today to celebrate Pongal with you. I am participating in the Jallikattu festival in Madurai,"

The State is set to witness Legislative Assembly elections later this year.

The event was banned by the Supreme Court of India in 2014 after it came under the radar of animal rights groups.

The Animal Welfare Board of India and the People for the Ethical Treatment of Animals (PETA) had filed a petition challenging the animal cruelty intrinsic to the festival. The activists claimed that bulls are abused and tortured during Jallikattu.

However, Tamil Nadu's state government insisted that Jallikattu was an important part of their culture and identity. The ban was removed three years later following massive protests, when the Tamil Nadu government passed an amendment to the Prevention of Cruelty to Animals Act