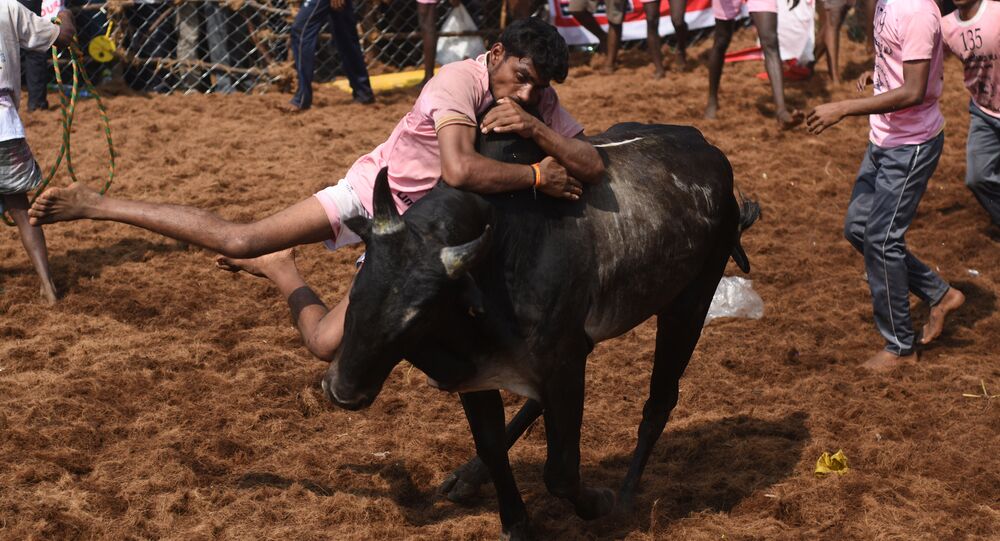 Jallikattu is integral to the culture of the southern Indian state of Tamil Nadu. The sport is not very different from the Spanish "running of the bulls" or Encierro.

New Delhi (Sputnik): The event which will be held from 15-17 January has begun with great fervour in Madurai district after getting safety and security clearance from the local administration. The sport involves controlling a bull running between crowds of people with bare hands.

Pudukkottai district hosts the highest number of Jallikattu events every year. In a novel initiative, the Madurai district has made it compulsory for the bull tamers to insure themselves under Prime Minister Suraksha Bima Yojana (Prime Minister Security Insurance Plan) against accidental death while participating in the bull-taming event.

Jallikattu is conducted in villages in an open ground where a bull is let loose amid hordes of people who try to control the bull by piling on its hump or horns. Tourists from all over India and abroad travel to Tamil Nadu to witness this unique sporting festival.

Jallikattu was banned for some time owing to protests and petitions filed in the courts by some animal welfare associations including Peoples for the Ethical Treatment of Animals (PETA). But the Tamil Nadu government lifted the ban on the sport because of widespread protests across the Tamil Nadu in 2017 demanding for the sport to continue. Tamil Nadu government had to pass a special ordinance to lift the ban on the sport placed by the courts.

'On the whole, in Belgium Traditional Parties are Losing Their Grip' – Expert