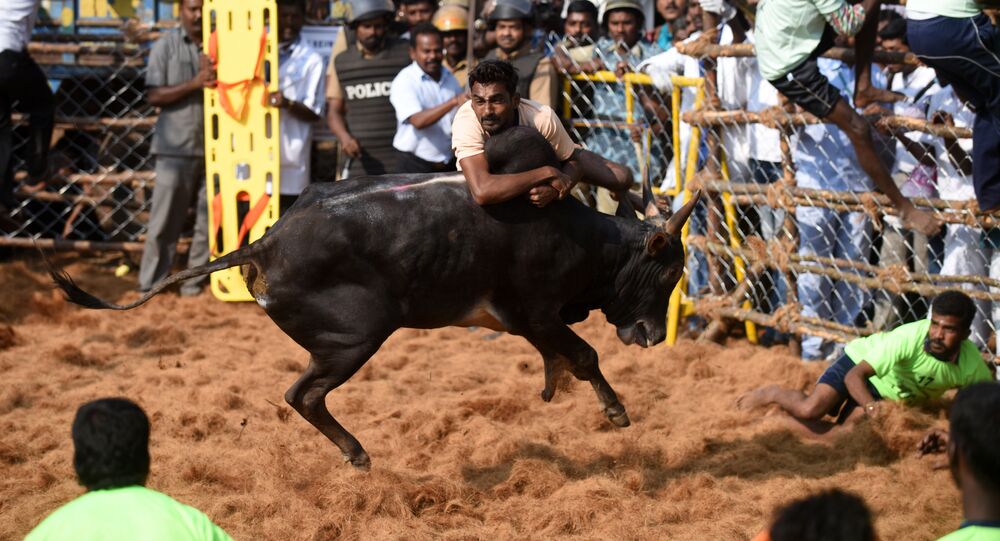 Jallikattu, a bull-taming sporting event held on the third day of the four-day-long harvest festival Pongal, is believed to date back 2,500 years. The sport is similar to Spain's "running of the bulls" or Encierro.

On Thursday, Fifty-two doctors – together with People for the Ethical Treatment of Animals (PETA) India – appealed to the Tamil Nadu government to call off the annual bull-taming event known as Jallikattu in the wake of the COVID-19 pandemic. The event is scheduled for January 16.

Jallikattu is held in villages on open ground – a bull is released into a horde of people, who try to grab its back or horns and hold on for as long as possible. Tourists from all over India and abroad travel to Tamil Nadu to witness the unique sporting festival.

The appeal by PETA and doctors came after the Tamil Nadu government gave organisers the green light to hold events in front of hundreds of people. After the announcement, people in some parts of the state started training bulls in preparation.

​"To prevent the rapid spread of Covid-19 and to protect public health, as well as to ease the pressure on the healthcare professionals, non-essential activities such as Jallikattu events, which lead to unnecessary gatherings of people, must not be allowed," reads the letter signed by 52 doctors.

The doctors also warn that COVID-19–negative certificates supplied by participants and thermal screening of spectators as pre-conditions for allowing Jallikattu are not enough to stop the virus from spreading.

"More people are expected to die this year, not only because of Jallikattu itself but also because of Covid-19, if Jallikattu events are not stopped. If huge crowds gather to torment bulls, society will be tormented, too," the letter continues.

Ankita Pandey, a PETA India research associate, said "At least 22 bulls and 57 humans have reportedly died, while 3,632 humans have been injured in events organised throughout the state since 2017."

Two men were killed and more than 15 were injured during the festival in 2019, which takes places across the southern Indian state of Tamil Nadu.