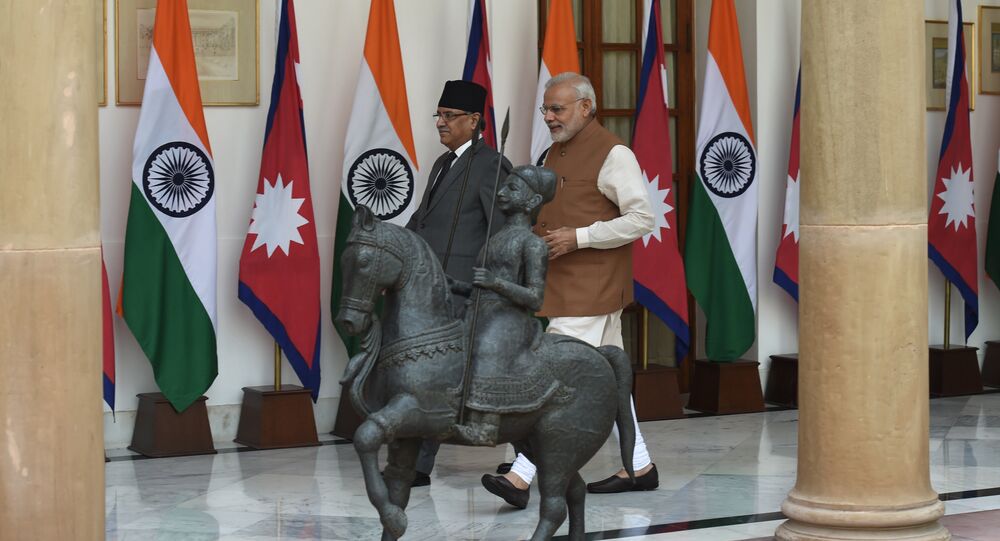 The visit by Nepal’s governing Communist Party chief Pushpa Kumar Dahal to India comes days after a delegation from China was in Kathmandu to try to forge unity between the party’s warring factions. While Delhi has called the ongoing crisis the country's internal matter, calls for “protecting democracy” in Nepal have been growing in India.

According to a report in The Kathmandu Post, Prachanda flew to Mumbai via New Delhi. The former Nepalese PM and his wife are reportedly accompanied by their daughter on the India visit.

The Himalayan country, which has developed close economic and defence ties with Beijing under Oli, was thrown into political turmoil last month after the prime minister unilaterally dissolved the parliament and called for snap polls scheduled for 30 April and 10 May.

Oli’s decision has been criticised not only by opposition parties as “unconstitutional”, but also by his own party chief Prachanda, who has threatened him with expulsion unless the prime minister provides a convincing explanation.

The visit by the CPC delegation, led by party Vice Minister Guo Yezhou, last month was viewed as a last-ditch effort by Beijing to bring Prachanda and Oli together.

“NCP warring factions stand poles apart as of today. CPC wanted unity, but it seems unlikely that they will come together”, Bhattarai, who has also served as a diplomat, told Sputnik.

The ex-Nepal envoy underlined that Beijing was “serious” about the situation in Kathmandu, pointing out that the CPC's delegation had invited opposition Nepali Congress leader Sher Bahadur Deuba to the centennial celebrations of the Communist Party scheduled to take place in Beijing later this year.

Amid the ongoing political turmoil in Nepal, Prachanda has on several occasions questioned the “silence” of New Delhi in recent days.

India, traditionally Nepal’s largest trading and defence ally, was only in 2019 overtaken by China as the biggest source of foreign investment in the Himalayan country.,

At a public meeting last week, Prachanda demanded an “intervention” from other democratic countries of the world to salvage Nepal’s fledgling democracy.

Prachanda’s concerns have resonated among strategic affairs experts in India, who say that New Delhi should “commit” itself to promoting democracy in Nepal.

“People of Nepal and the democratic institutions in Nepal are sufficiently strong to meet and tackle any challenges to the Constitution and democracy”, Seshadri Ramanujan Chari, a strategic affairs analyst, told Sputnik.

The analyst also views China’s mediation in the ongoing Nepal crisis with “suspicion”, reckoning that Beijing could be trying to “influence” Delhi-Kathmandu ties.

“There could have been attempts to influence the government in Kathmandu to take some decisions that would impede friendly relationship between India and Nepal”, he said, referring to the CPC delegation's visit, as well as reported meetings between Beijing’s envoy to Kathmandu Hou Yangi and Oli as well as Prachanda last year.