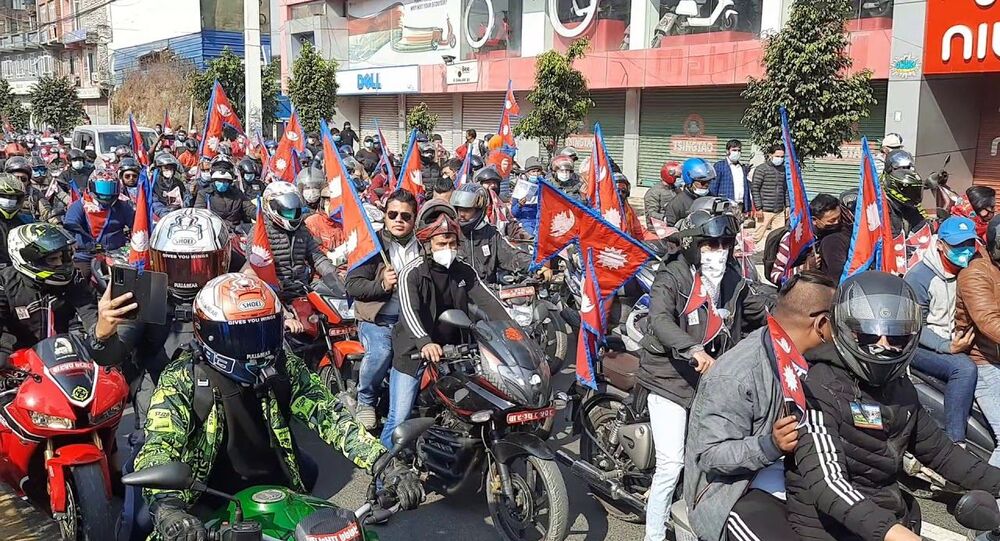 Under the monarchy, which was abolished in 2008, Nepal was the only country in the world to have Hinduism as a state religion. Recent protests by Hindu groups in the country calling for the return of monarchy have raised alarm bells among the elected government headed by Communist leader KP Sharma Oli.

Even though there is a "growing perception" in Nepal that India is backing the pro-monarchy Hindu protestors who have been calling for return to a Hindu state in the Himalayan country, a former foreign policy advisor to Prime Minister KP Sharma told Sputnik that there was "no proof" yet of New Delhi's involvement.

"Democracy in Nepal is in India's interest. Going back to the days of Hindu monarchy will marginalise a large section of the Nepalese population," reckons Dinesh Bhattarai, who has also served as Nepal's Permanent Representative to the United Nations and served in country's foreign missions in Italy, India and the US, among others.

"People-to-people ties form a strong component of bilateral ties between the two countries," highlights the ex-diplomat, noting that visa-free movement between people from two countries has contributed significantly to bolstering understanding between the citizens.

Bhattarai says that Kathmandu expected "unequivocal" backing from India as the ruling Nepal Communist Party (NCP) faces one of its most "formidable challenges" since coming to power in 2018.

Bhattarai was commenting on weekend protests in Nepal, calling for the reinstating of the monarchy in the Himalayan country as well as the setting up of a Hindu state. The demonstrations, which are said to have rocked large parts of Nepal, are reportedly backed by the Rashtriya Prajatantra Party and several royalist groups.

Even as Nepal's Home Ministry has authorised security agencies in all 77 districts to use force to suppress the demonstrations, the Hindu groups have warned that they would ratchet up their movement in the coming weeks, as per a report in Nikkei Asian Review.

'Blame' the Ruling Party for these Protests

Bhattarai explains that the pro-monarchy demonstrations, the second this year, have been in the making for some time because of PM Oli's policies which have led to the "marginalisation" of certain groups within the country.

Pushpa Kumar Prachanda, the leader of the CPN (Maoist Centre), is known to not get along well with the Prime Minister. In a unique power sharing agreement, both Prachanda and Oli are chairmen of the Nepal Communist Party.

Bhattarai highlights that the efforts by the Chinese Ambassador to Kathmandu to forge a united front within the ruling Communists had also failed to reap any dividend. "China has been wanting that both Oli and Prachanda bury their differences. But, clearly that hasn't been happening," he remarks.

Hou Yanqi, China's ambassador to Nepal, held a series of meetings with warring factions of the Nepal Communist Party earlier this year in what has been viewed as Beijing's intervention in the brewing crisis in the ruling party. "While there were meetings between the Chinese envoy and the Communist politicians, we really don't know the give and take involved," notes Bhattarai.

"By trying to negotiate peace between the Communist factions, China is in a position which India found itself in three to four years back," recalls the foreign policy veteran, noting New Delhi's past efforts in helping Kathmandu tide over its previous crisis.

He, however, concedes that the "timing" of these meetings has raised concerns in New Delhi, as they took place when India and Nepal have been embroiled in a border dispute triggered after India inaugurated a road that Nepal claimed passed through its territory.

The Nepalese Parliament approved a new map in May this year, showing all the disputed territories as part of Nepal. India dubbed the parliamentary vote as "cartographic assertion".

Bhattarai said that Beijing had ramped up its "presence" in Nepal in the last four years. "China topped the list of countries investing in Nepal last year. Our ties have been on the upswing, which is in tune with our national interest to have good relations with our neighbours," he said.