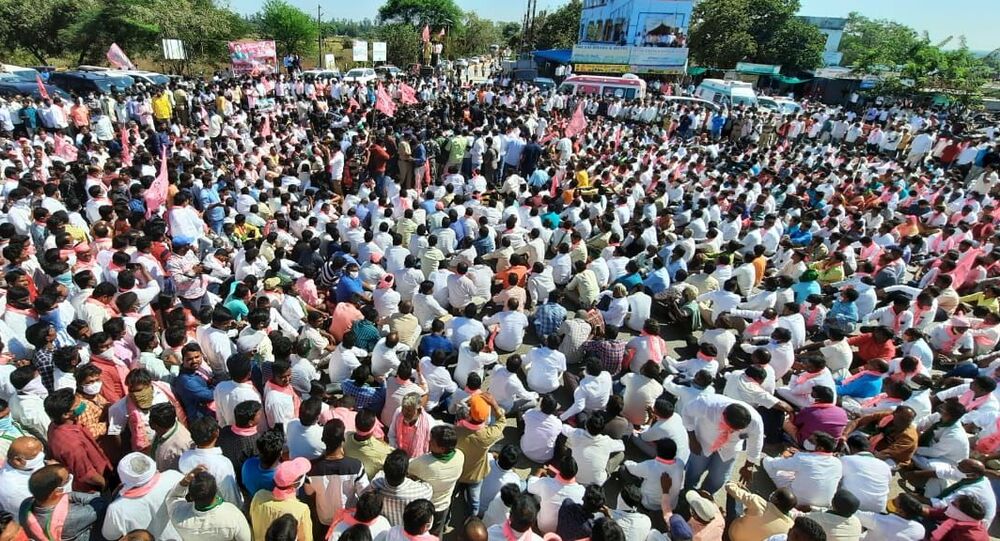 Farmers protesting against the Modi government have been camping out along the borders of the national capital, New Delhi, for the past 23 days. The farmers are demanding the revocation of agricultural reform laws passed by the Indian parliament in September.

Expressing solidarity with farmers protesting on the outskirts of New Delhi, nursing staff from hospitals in the Indian state of Punjab have reached one of the protest sites, offering their "services" to any ailing protesters.

"We are here to support the agitating farmers. We are also ready to help anyone who falls sick", said Harshdeep Kaur, who works at a hospital in Punjab's Ludhiana.

More than two dozen protesters have so far lost their lives since farmers from the Punjab camped out on the Delhi border in protest against farm laws over three weeks ago.

Police in the Indian state of Haryana have confirmed several deaths since the eruption of protests in late November.

Manoj Yadav, director-general of police (Northern Haryana) told the media on Friday that at least 25 farmers have died since 26 November – when a large number of farmers from the Indian states of Punjab and Haryana began moving towards the national capital with an aim to demonstrate against the farm laws passed by the Modi government. They were, however, stopped at various entry points to New Delhi – where they have been camping out ever since.

"There have been about 25 deaths so far. One of them being death by suicide two days ago. Fourteen deaths were due to natural causes, mostly heart attacks and cold. At least ten people died in separate road accidents as they travelled from Punjab and Delhi states to participate in the protests", said Yadav.

Farmers are protesting against the Modi government's Farmers Produce Trade and Commerce Bill, 2020 and the Farmers Agreement on Price Assurance and Farm Services Bill, 2020, demanding both laws be repealed. The entire opposition led by the Indian National Congress is supporting the farmers. The laws seek to liberalise the agricultural produce marketing and sale system, which the farm organisations are opposing.