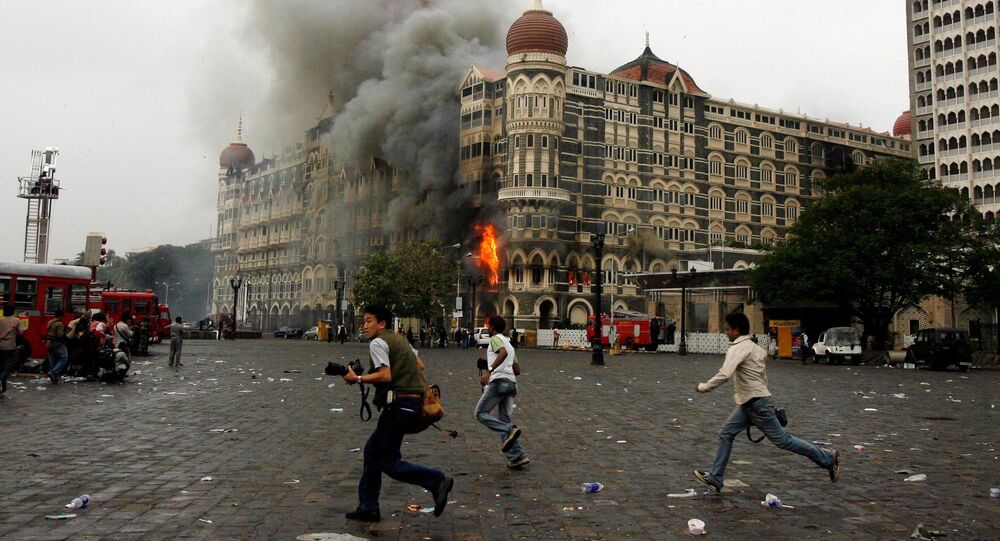 On 26 November 2008, a group of 10 heavily armed terrorists from Pakistan-based Lashkar-e-Taiba descended on India’s financial capital. They targeted several sites in the city, killing at least 174 people, including 20 security personnel and 26 foreign nationals. While 9 of the terrorists were gunned down, one was captured alive.

On the 12th anniversary of the gruesome 2008 Mumbai Terror Attack, Indians recall the resilience of the city which bounced back immediately after.

“....what is more memorable, is the way Mumbai as a diverse people [sic] came together, casting aside all differences, to vanquish the terrorism and destruction on that day”, recalled Ratan Tata, former chairman of the Tata Group and the face of the salt-to-software business conglomerate, in a tweet. The Taj Mahal Palace hotel, one of the worst-hit in the terror attacks, is owned by the Tata Group.

​India’s governing Bharatiya Janata Party (BJP) in a tweet paid tribute to the martyrs of the Mumbai terror attack.

Our humble tributes to the martyrs of the 26/11 #MumbaiTerrorAttack.

We have not forgotten and forgiven the ugliest face of Pakistan-sponsored terrorism against India.

Our resolve to defeat terrorism is stronger today! pic.twitter.com/6cZWpfesDm

Heartfelt tributes to the victims & martyrs of 26/11 #MumbaiTerrorAttack & salute to the strength & resilience of people of Mumbai.

We will be eternally grateful to all the security forces personnel who valiantly fought & made the supreme sacrifice for Mother India on that day. pic.twitter.com/RlmyQ9diA6

26/11, a day Mumbaikars will never forget. My heartfelt tribute to the martyrs and victims of the #MumbaiTerrorAttack. We will forever be indebted to our bravehearts for their supreme sacrifice 🙏🏻

Heartfelt tribute to martyrs n victims of 26/11 #MumbaiTerrorAttack 💔
Salute to strength n resilience of people of #MumbaiCity
Eternally grateful for your supreme sacrifice n you are forever in our hearts 🙏🏼🙏🏼🙏🏼 #BlackDay #MumbaiAttack #MumbaiPolice #JaiHind 🇮🇳 pic.twitter.com/TpEYXeMKNC

​12 years since the sad day. He is of the greatest son of our soil- Shaheed Tukaram Omble. The courage, the presence of mind and the selflessness demonstrated by him on that day- no words, no awards can do justice. Garv hai bahut aise mahaan insaan par 🙏🏼 #MumbaiTerrorAttack pic.twitter.com/zb8cI8xchA

​The incident has also left deep scars in the minds of those who witnessed the incident from close quarters.

“The incident still brings bone-chilling memories. We were part of a Parliamentary Panel on a visit to Mumbai and staying at Taj Hotel. While we were having dinner at one of restaurants there, gun shots were heard and there was commotion all around. Since a few parliamentarians were part of our team, we were immediately huddled out to safety”, recalled K.P. Muraleedharan, then a staffer in the Indian parliament.

Meanwhile, the Indian-American community held a protest in front of Capitol Hill on Wednesday, 25 November, on the eve of the anniversary of the Mumbai Terror Attack. Trucks with billboards reading “We Demand Justice” were also seen outside Pakistan's Embassy in Washington, reported national wire agency ANI.

Washington DC, US: Indian-Americans & other community organisations held protest in front of Capitol Hill on 25th Nov. A truck with a billboard, reading "We demand justice” seen outside Pakistan and Turkish embassies in Washington, DC on the eve of #MumbaiTerrorAttack anniversary pic.twitter.com/jR8JRDtCjd

​The attack conducted by 10 members of Lashkar-e-Taiba, which began at around 2130 IST on 26 November, continued at three locations where hostages were taken – a Jewish outreach centre at Nariman House, as well as the luxury hotels Oberoi Trident and Taj Mahal Palace.

9 of the 10 terrorists were eliminated. The surviving attacker, Ajmal Kasab, was captured on 27 November. He was put on trial and sentenced to death on 6 May 2010, which was upheld by the Bombay High Court on 21 February 2011.

The Supreme Court of India, where Kasab moved an application, also upheld the death sentence on 29 August 2012. After the president of India also rejected his mercy petition on 5 November, 2012, Kasab was hanged to death in Yerawada Jail in Pune city, Maharashtra state, on 21 November 2012.