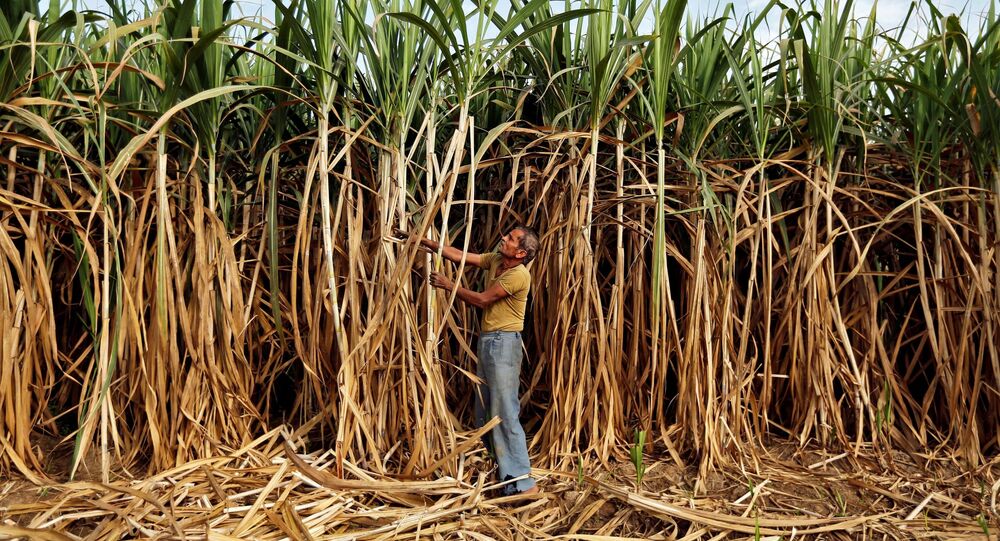 Indian farmers are up in arms against agricultural laws proposed by the Narendra Modi government. The Indian parliament recently approved two farm bills and an amendment to the Essential Commodity Act to remove states' control on the prices of farm products.

Farmers from the Indian state of Punjab on a protest march to Delhi against the Narendra Modi government's recently approved farm laws have reached the outskirts of the national capital.

The Delhi Police on Thursday sealed entry points to stop the protesting farmers from gaining entry into the Indian capital.

© AFP 2020 / NARINDER NANU
Farmers Block Highways to Protest Against Farm Laws Across India - Photo, Video
The protesting farmers want to camp out at a central location in Delhi and raise their voice against the farm laws.

The farmers, organised under the aegis of 30 farm associations, are protesting against the two farm reform bills approved by the Indian parliament during its recently concluded Monsoon Session.

The laws in question are the Farmers Produce Trade and Commerce Bill, 2020 and the Farmers Agreement on Price Assurance and Farm Services Bill, 2020.

The protesting farmers have been marching towards Delhi in large numbers with a cavalcade of tractors.

​At the Shambhu in Ambala in the Indian state of Haryana, bordering the national capital of New Delhi, protesting farmers tossed a police barricade down into a river. After the incident, a water cannon was used to disperse the farmers.

#WATCH Farmers' protest continues at Shambhu border, near Ambala (Haryana) as police stop them from proceeding to Delhi pic.twitter.com/UtssadGKpU

Barricades were set up in various other locations too.

​Farmers said they were stopped at Karnal, a hundred kilometres from Delhi.

Haryana: Farmers gathered in Karnal to protest against farm laws, on their way to Delhi

"They have barricaded the roads but we're still going to walk through. The public is facing problems. They shouldn't have closed the road", said a protester pic.twitter.com/WMzFXI477r

Along with the two farm bills the government also amended the Essential Commodity Act to remove stock limits on agriculture produce. The laws are aimed at reforming agriculture marketing practices in the country, which have hitherto occurred through Agriculture Produce Marketing Committees (APMC).

The Farmers Produce Trade and Commerce Bill 2020, allows farmers to sell their produce at places apart from their designated APMC market.

The Farmers Agreement on Price Assurance and Farm Services Bill aims at allowing contract farming under which they can enter into supply agreements with private firms for remunerative and pre-decided prices.

India's principal opposition party Congress have been calling the laws draconian. The party contends that leaving the price of farm products to market forces will be detrimental to the interests of farmers.