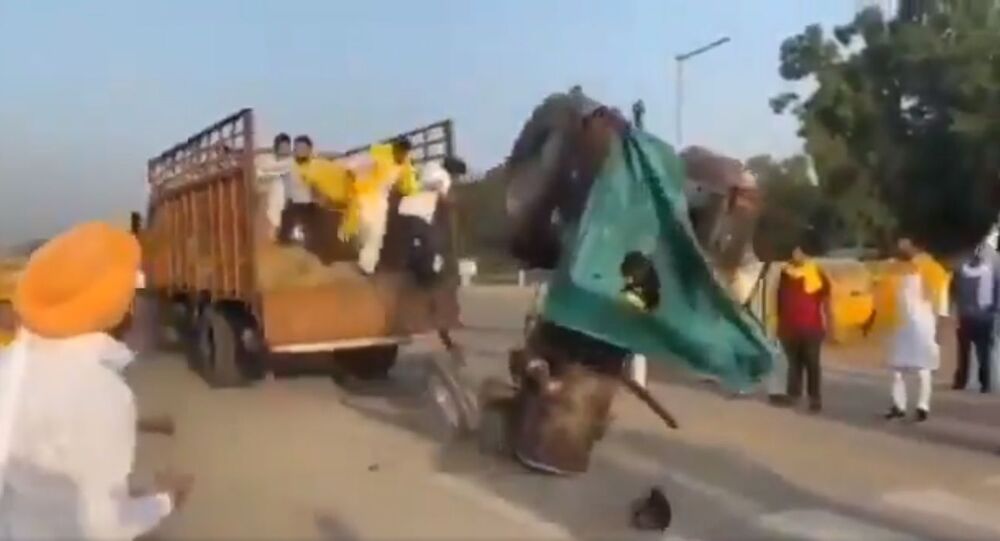 Earlier this month, India passed three new farm laws that have led to major protests across the country, especially in agricultural states like Punjab, Haryana, and Karnataka.

In the early hours of Monday morning, members of the Punjab Youth Congress set a tractor ablaze in front of Delhi’s iconic war memorial, the India Gate, marking the beginning of another day of ongoing protests againt farm bills.

© REUTERS / ADNAN ABIDI
Indian Farmers Block Railway Tracks, Highways to Protest Modi Govt's Farm Bills
Around 15 to 20 people gathered around the India Gate, located in the heart of Delhi facing the Indian presidential residence, the Rashtrapati Bhawan, and set fire to the tractor in a symbolic move, as the vehicle is an important tool for farmers in the country.

The police and fire department were able to get the situation under control while dousing the fire.

Videos purportedly depicting the site have emerged on Twitter.

Members of the Punjab Youth Congress also live streamed the protest the from India Gate. The police have filed a complaint against the unknown protesters.

A total of three agricultural bills that passed the Monsoon Session of the Indian Parliament last week have led to unrest in the country. The bills were passed despite the main opposition party, Congress, criticising them.

The Farmers (Empowerment and Protection) Agreement of Price Assurance and Farm Services Bill, 2020 allows contract farming and the Essential Commodities (Amendment) Bill 2020 aims to deregulate the production, supply, and distribution of food items like cereals, pulses, potatoes, and onions.

Farmers from across India have warned the government that their agitation will intensify if the government does not revoke the bills or ensure legal safeguards from them.