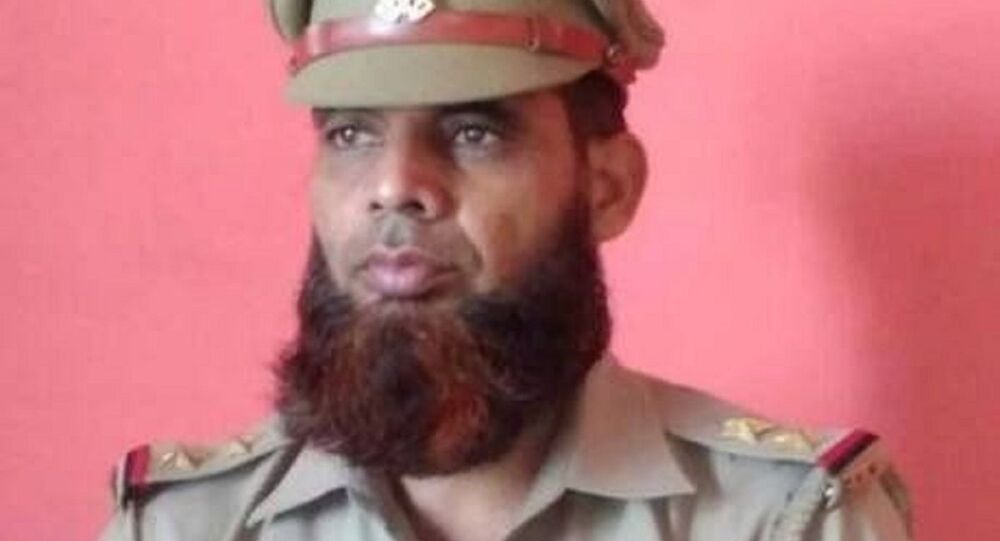 As per the Uttar Pradesh state police force rules, no police personnel is allowed to sport a beard apart from policemen from the Sikh community. If they want to keep a beard, they have to ask for permission from a higher authority.

A sub-inspector identified as Intsaar Ali posted in Baghpat of India’s Uttar Pradesh has been suspended on charges of flouting state uniform norms by keeping a beard despite multiple warnings.

"Intsaar Ali had been served with a notice for not following uniform protocol and [not] trimming [his] beard. Despite that, Ali continued to flout dress code norms without any permission from the concerned authorities. He has been suspended", a senior police official in the district told Sputnik, requesting anonymity.

The official also stated that a plea from Ali seeking permission is pending with senior officials, which would be seen at the earliest.

Meanwhile, as per Supreme Court regulation 425(b), only those Muslim personnel who had maintained a beard along with moustache at the time of commissioning or enrollment prior to 1 Jan 2002, would be allowed to keep it.

"Such personnel are to maintain it in a manner that it is neat, trimmed, and tidy and not more than the length which could be covered by one fist. Muslims who have grown a beard after joining the service should shave off their beard. Under no circumstances, shall a Muslim person who had a beard at the time of joining service before 1 Jan 2002 be allowed to maintain the beard without a moustache. A moustache should be a part of the beard", states regulation 425(b).

The official also explained that this rule was implemented because a policeman’s duty is such that not only does he have to work in an unbiased way but also has to look unbiased.

The news has been widely discussed on social media:

But Hindus can wear threads, tilaks, keep photos and idols in police station. Many govt buildings have small makeshift temples.
But, only Muslims r bad, just because they r Muslims.

@BJP4India and it's bhakts were outraged few days ago when Sikh agitator's turban came off during scuffle with police for carrying revolver. Bigotry Janta Party

Normally in police department except any religious purpose beard is not allowed. As a department they want to come front of public without being biased both with their looks and duty. Beard while in uniform is a subject of controversy in a country.