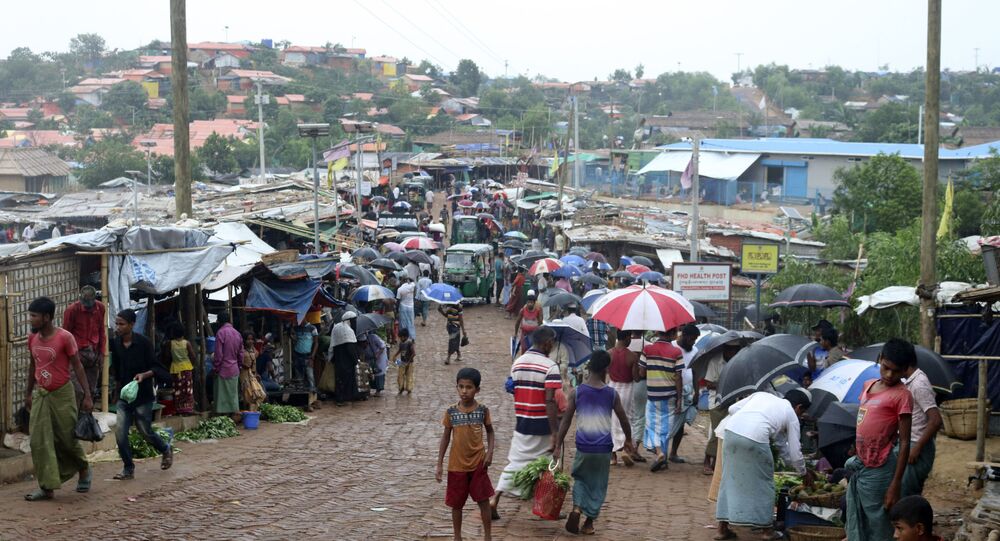 Both India and Bangladesh have expressed concerns about possible links between Pakistan-located terror outfits and the Rohingya insurgent outfit Arakan Rohingya Salvation Army (ARSA). Bangladesh's Prime Minister Sheikh Hasina has described the Rohingya refugees living in her country as a national security "threat".

China and India must exercise their economic and military clout over Myanmar to convince the Aung San Suu Kyi administration to expedite the repatriation of hundreds of thousands of Rohingya refugees living in the camps of Cox's Bazar, Bangladesh Deputy High Commissioner to India Toufique Hasan has told Sputnik.

Stating that India is helping Myanmar with an array of connectivity projects and China, on the other hand, has been one of the biggest investors there, Bangladesh's second-most senior diplomat to India Toufique Hasan said: "Our government wants both to talk to Myanmar on the issue".

China and India have backed the Myanmar government on the Rohingya refugee issue, with both Asian giants having invested in infrastructure and connectivity projects in the strategically-located Asian nation.

"Despite various assurances, the repatriation of Rohingya refugees doesn't seem to be a priority for either India or Myanmar", Hasan stated.

The Bangladeshi diplomat expressed concern that Nay Pyi Taw has not been honouring a Memorandum of Understanding (MoU) signed with Dhaka in January 2018, stipulating the Asian nation take back 1,500 Rohingya refugees every week.

"We will continue to welcome them. Their return to Myanmar is also voluntary. We can't pressure them into returning. No Rohingya refugee from Bangladesh wants to return voluntarily", he said.

The United Nations Office for the Coordination of Humanitarian Affairs (OCHA) documents that 909,000 Rohingya refugees live in 34 "congested" camps in Bangladesh's Cox's Bazaar, which is also the site of the world's largest refugee camp.

Just more than 860,000 of these refugees are registered with the UN Refugee Agency (UNHCR) as per its website.

India is believed to be hosting nearly 40,000 Rohingya refugees, according to Human Rights Watch (HRW).

Over 18,000 of them have been recognised by the UN Refugee Agency. Globally, there are over 200,000 Rohingya people recognised as Internationally Displaced Persons (IDPs).

In India, a federal order in 2017 called upon all states to identify Rohingya refugees and prepare for their deportation back to their native country.

The government order was later challenged by two Rohingya refugees in the country's top court.

Meanwhile, Rohingya refugees living in the security camps of India's Jammu along the border with Pakistan could become a "ticking time-bomb" for the country, security analyst Brigadier Anil Gupta, an Indian Army veteran, opines.

"It is a very sensitive area for India. The vulnerable Rohingya population in Jammu's camps could be easily exploited by Pakistan-based terror groups to create national security problems for us", Gupta told Sputnik.

According to data available from the New Delhi-based Rohingya Human Rights Initiative, Rohingya refugees are either living in camps or as tenants in Jammu and Kashmir (24-26 camps), Hyderabad (28 camps), Delhi (two camps), Bengaluru (one camp), and Haryana (eight camps).

A total of 121 Rohingya refugees are languishing in Indian prisons at present, as per the group's records.

"There hasn't been any forcible deportation (from India) since 2018, when three groups were sent back to Myanmar", Rohingya Human Rights Initiative Director Sabber Kyaw Min told Sputnik.

Min, a Rohingya refugee living in India since 2005, said calls for the repatriation of his compatriots overlooked the security situation on the ground in the state of Rakhine.

"We don’t have any voting rights. While the governing party National League for Democracy (NLD) tells other countries that they will allow us to re-settle, how could we go back", questioned Min, who heads the Rohingya Human Rights Initiative.

He pointed out that even the main challenger to Myanmar's counsellor Aung San Suu Kyi in the 8 November national election was pandering to anti-Rohingya sentiment.

"We can't just sleepwalk to our deaths in Myanmar by agreeing to go back", the Rohingya rights activist said.

Time Not Ripe for Rohingyas to Return to Myanmar - Angelina Jolie