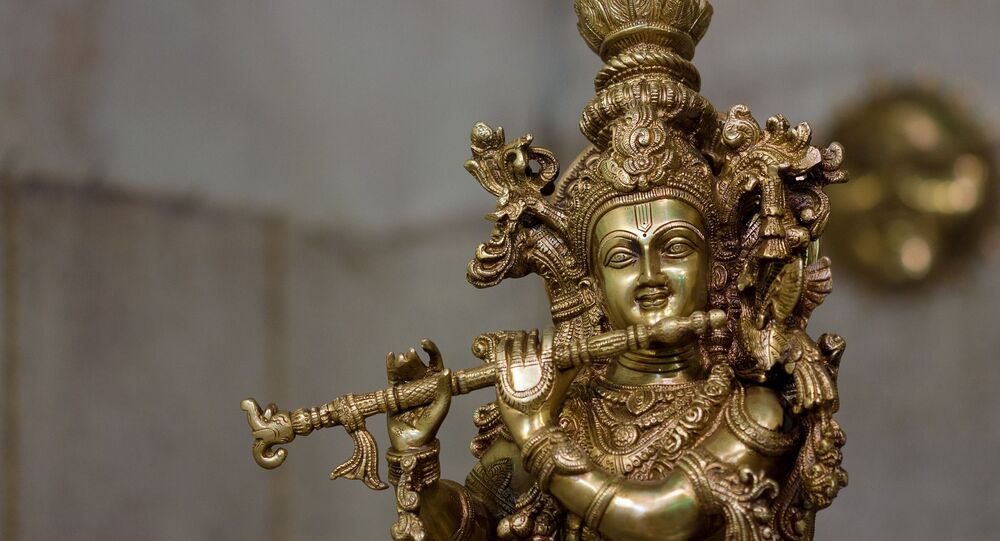 New Delhi (Sputnik): The annual string of back-to-back festivities in India has begun, giving a warm feeling to Indians, who have been in isolation due to the coronavirus pandemic since March. Just days after Indian siblings celebrated their bitter-sweet bond with Rakshabandhan, the country has lit up again for another festival – Janmashthmi.

The festival of Janmashthmi marks the auspicious birth of the Hindu God Krishna, who is believed to be the eighth reincarnation of Lord Vishnu – the one responsible for the preservation of life.

The prayer rituals of Janmashthmi commenced Wednesday at midnight, with Krishna-worshipers placing idols, usually gold or copper, of the infant god in tiny cradles and dressing the figurines in colourful clothes. Sweets and home-churned butter are offered to the deity. The devotees break their day-long fast with fruits, curd, and sweets at sunset and culminate the day with Sanskrit chants dedicated to Lord Krishna.

​The festive cheer has made its way to social networking platforms in India, with netizens extending Janmashthmi wishes to each other. India's President Ram Nath Kovind also greeted his countrymen on the occasion. Pictures of kids dressed up like Lord Krishna in bright dhotis, accessorised with peacock-feathers and flutes, have also gone viral on social media.

Lord Krishna's message of Karmayoga is a call to focus on our responsibilities rather than caring for rewards. This spirit has been evident in the working of all our Corona warriors.

May Lord Krishna bless everyone with good health and prosperity.

​Story and Significance of Janmashthmi

According to Hindu beliefs, Lord Krishna, who has around 108 different names, was born in the ancient city of Mathura, located around 180 kilometres from the national capital Delhi. Raised in a humble family of cattle rearers, stories of the mischievous boyhood of the deity in his human form are very popular in India.

The folktales of Krishna mention him charming the daughters of Mathura's overlords with his flute-playing and mesmerising words.

Krishna-devotees believe that the deity’s birth marked the beginning of a new era of life as we know it; hence his birthday is celebrated with joy and sincere devotion.

Celebration amid the Pandemic

For years, the town of Mathura and other areas around it, like Vrindavan, are decorated as a newlywed bride on the occasion of Janmashthmi.

Krishna temples in the region attract millions of devotees every year from across India, as well as from around the world. Especially on Janmashthmi, people flock to Mathura to get a glimpse of their god in his own home on his birthday.

Take a look at this video from last year from the famous Bake Bihari Temple in Mathura.

This year however, due to the pandemic, Indians are offering prayers to Lord Krishna from their own homes.

In the marble city of central India Jabalpur, a man dressed up as Lord Krishna stood on the road and distributed masks during the festival.