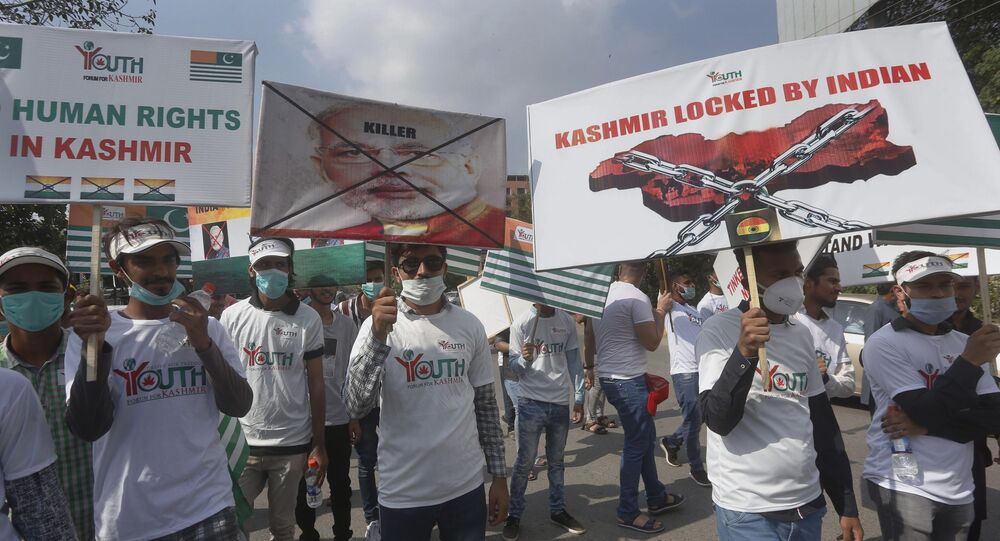 39 Injured in Grenade Blast at Kashmir Rally in Pakistan's Karachi

New Delhi (Sputnik): People in the Pakistani city of Karachi were holding a rally to mark one year since the abrogation of Article 370 that stripped Jammu and Kashmir of its special status.

As many as 39 people were injured in a grenade blast during a rally in the Gulshan-i-Iqbal area on Wednesday evening in Pakistan's city of Karachi. The blast took place near the main truck that was part of the rally, a spokesperson said. The explosion took place near the Bait-ul-Mukarram Mosque and damaged nearby cars.

​Police confirmed that unidentified persons riding a motorcycle threw a grenade at the rally and fled. According to Pakistani news media The Dawn, a bomb disposal squad was called to determine the nature of the blast, but ruled out that it was caused by a planted bomb.

​The Sindhudesh Revolutionary Army (SRA) has accepted responsibility for the attack on Jamat-e-Islami's pro-Kashmir rally in Karachi. The SRA is a militant group based in the Sindh province of Pakistan that demands a separate homeland for Sindhis.

Organiser of the rally Sirajul Haq termed the bomb attack a "cowardly act".

"Indian agents are still present in the city who could not tolerate the expression of solidarity with the people of Kashmir", he said. "We will not be frightened by such vile acts and will speak up for the people of Kashmir with increased determination", he wrote in a tweet.

The rally was held to mark one year since India revoked Jammu and Kashmir's semi-autonomous status on 5 August 2019. India and Pakistan both claim the Kashmir region and administer parts of it. Against the backdrop of one year since India's decision, rallies were organised in different parts of Pakistan.