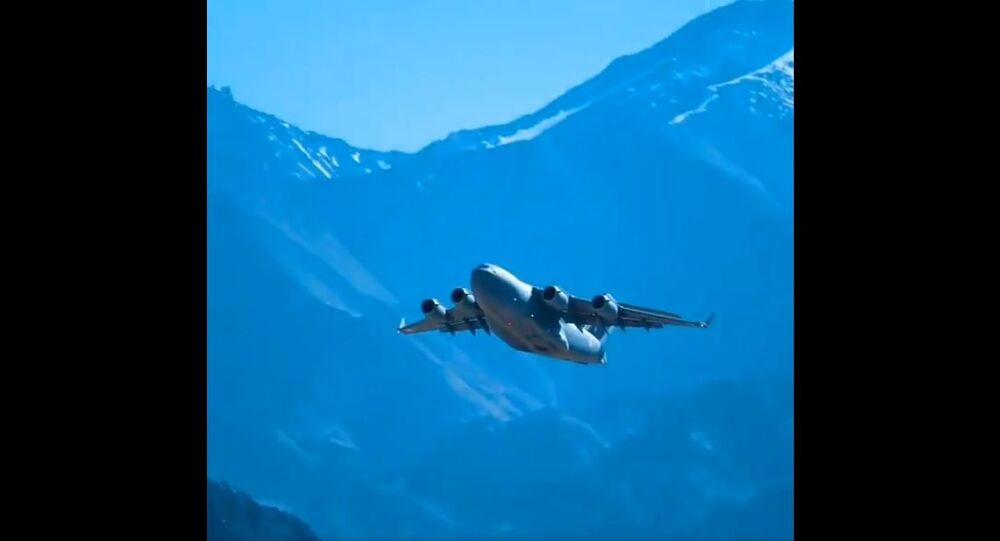 New Delhi (Sputnik): The border dispute between India and China worsened when the armies of both sides clashed on 15 June, leaving 20 Indian soldiers and an unconfirmed number of Chinese troops killed. While efforts have been made to disengage, India has beefed up its presence along the border.

India has reinforced its military assets along the border with China, as the complete withdrawal of Chinese troops from flash points in eastern Ladakh has not yet taken place.

New Delhi and Beijing have held several rounds of talks between army commanders and diplomats, but Beijing has not yet withdrawn its troops from either Pangong Tso or the Depsang Valley. According to government sources, Chinese troops are almost 8 kilometres deep inside Indian Territory in the Depsang Valley.

Indian Air Force has also pressed into service its largest transport aircraft, the C-17 Globemaster to mobilise men and machines near one of the highest airfields in Ladakh.

​New Delhi has also deployed the Indian variant of Boeing’s P-8A Poseidon capable of anti-surface warfare, and undertaken intelligence, surveillance and reconnaissance (ISR) missions in Ladakh. According to government sources, it is also planning to station MiG-29K jets in the northern sector, while the recent acquisition of French Rafale fighter jets is set to be stationed at an airbase in northern India next week.

The sources said the military brass is considering deploying Indian Navy's MiG-29K fighter jets to a couple of air bases in the northern sector as part of efforts to increase synergy in dealing with national security challenges.

After the latest violent standoff with Beijing, New Delhi has been reviewing its acquisition plans.  India has requested its suppliers in Russia, the US, Israel and France to expedite existing contracts.

Indian Prime Minister Narendra Modi and Defence Minister Rajnath Singh visited flashpoints in eastern Ladakh and assured the troops that they would be equipped with modern weapons.

The India-China border covers the 3,488 km-long Line of Actual Control (LAC), which is a land border in most regions, but in Pangong Tso in Eastern Ladakh it passes through a lake. India controls the western portion of the 45-km long lake, while the rest is under Chinese control. Most of the clashes between the two countries have taken place in the Galwan Valley.