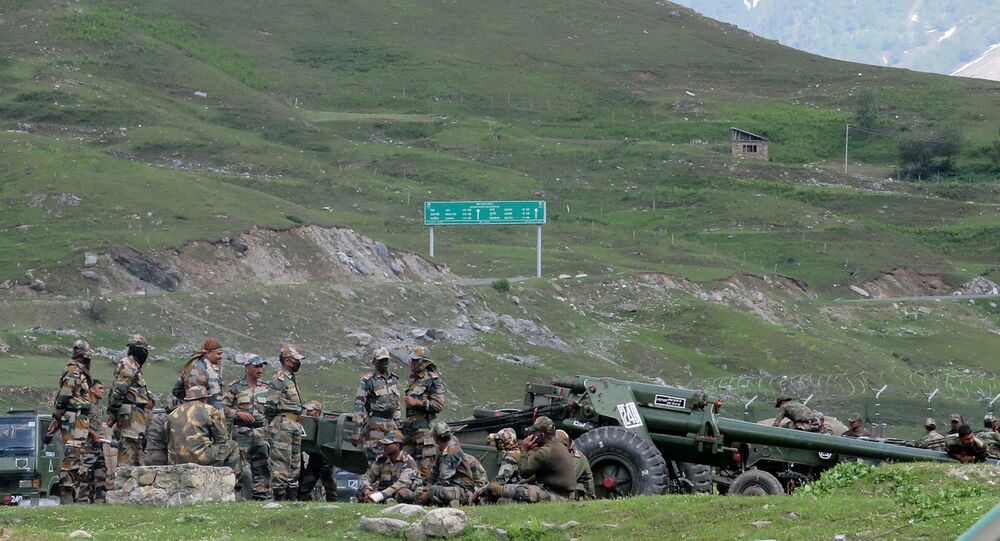 New Delhi (Sputnik): India and China are engaged in massive deployments of troops, artillery, and heavy vehicles in the Ladakh region, including the Depsang Plains – very close to the Karakoram Pass. While the Indian Army has claimed that there was a “mutual consensus” on disengagement on 22 June, the military build-up continues by both sides.

Local media reported that an all-new helipad is being constructed at finger 4 of Pangong Tso in Ladakh, which is very close to an Indian military post and it is India's perceived side of the Line of Actual Control.

"As part of the ongoing build-up in the sector, the air defence systems of both Indian Army and the Indian Air Force have been deployed in the sector to prevent any misadventure by the Chinese Air Force fighter jets or the People's Liberation Army choppers there", government sources told ANI.

© REUTERS / Andrew Harnik/Pool
Decision to Reduce Troops in Germany Aims to Tackle Chinese Threat to India, East Asia - Pompeo
Indian government sources told Sputnik that the situation remains tense and the deployment of military assets, including Sukhoi-30 and strategic bombers, is continuing on the Chinese side as well.

Indian radar system detected China’s fighter jet and combat helicopters near Daulat Beg Oldie sector, Galwan valley, Hot Springs area, and Pangong Tso and even they are moving closer to Indian side of the lake.

To understand the topography, different parts of Pangong Tso are marked as fingers 1 to 8. India claims that the Line of Actual Control passes near finger 8, while China claims that its side of the boundary stretches to finger 4. So between fingers 4 and 8, troops from both sides were conducting patrols on a regular basis, but which has stopped since April after the current stand-off erupted.

Meanwhile, satellite images from the Galwan Valley show that at least 16 camps of the Chinese People's Liberation Army are present within 9 kilometres of the Line of Actual control in the region, which is the place of a violent clash in which 20 Indian soldiers were killed on 15 June.

An #Exclusive image via @AuroraIntel inspects the changes at #HOTSPRINGS since may, earlier where tanks & towed artillery were spotted .. this 22 June image shows how #China PLA forces have dug in with adequate camouflage & reorganized their earlier positioning #IndiaChinaFaceOff https://t.co/HlHaJJpdvp pic.twitter.com/DT0yq68C7O

Meanwhile, Indian Prime Minister Narendra Modi, in his monthly radio address on Sunday, claimed that troops have given a befitting answer to those who eyed India's territory in Ladakh.

"India knows how to do friendships but it can also look someone in the eye and retaliate to give an apt reply. Our brave soldiers have shown they will not let any harm be done to Mother India's pride", Modi said.

Indian and Chinese troops have been engaged in a stand-off for more than two months in the Ladakh region along the 4,057 km Line of Actual Control. Both the sides have accused each other of breaching the loosely-demarcated border in the remote, snowy deserts of the valley.