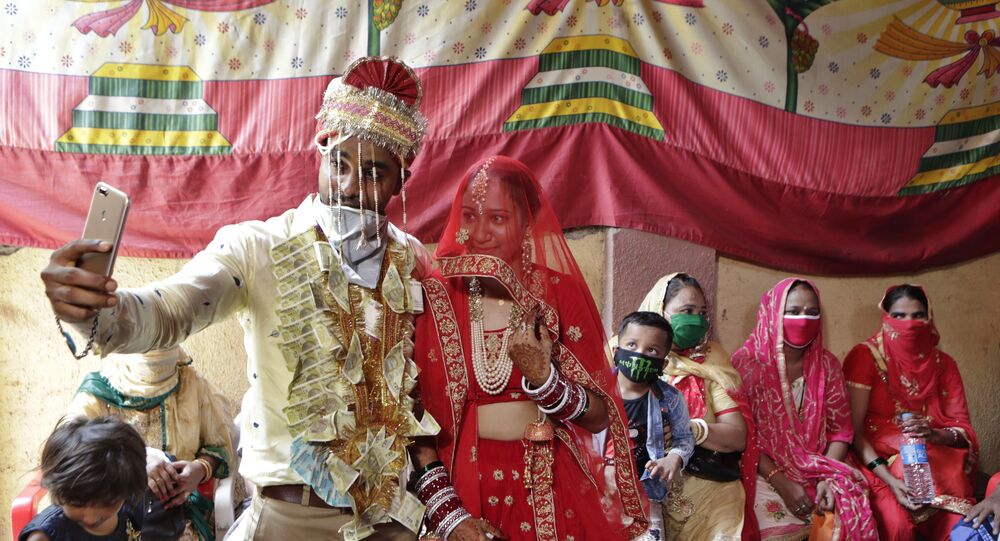 New Delhi (Sputnik): Weddings in India are definitely a big deal – not just in size – but also in importance. Indians believe when two people are tied in holy matrimony, they choose each other as life partners for eternity and beyond. Extended family and friends are invited to these wedding ceremonies that can often last for days.

Getting married is still the top priority for many young people in India, even as the number of coronavirus cases has been rising, leaving the country with the third highest caseload in the world.

Several major outbreaks of coronavirus were reported to have originated from weddings in India between April and July.

So why are Indians prioritising weddings even as social gatherings are clearly a threat to people's health?

“There are three main reasons that are hurrying up families to go through with the weddings – one of them is the scare of the second wave of COVID-19, and who knows when it could strike and who is to say for how long will that go on,” Khyati Chauhan, a Delhi-based bridal make-up specialist told Sputnik.

“Since the government has only allowed 40-50 people to attend weddings, people are taking advantage of the situation and quickly getting done with the function without having to deal with long lost relatives, who only show up for weddings to complain about the food. These celebrations are more personal with just immediate family and close friends,” Chauhan, who has been receiving bridal make-up bookings throughout the pandemic, added.

Traditional beliefs and superstitions associated with wedding ceremonies are hard to break, even amid a pandemic.

According to the Hindu almanac, specific months and dates are more auspicious than others for weddings. The ‘JanamKundli’ or, the birth charts of the bride and the bridegroom are matched for perfect alliance and the most favourable date. This is believed to amplify the success, luck and happiness of the newly-weds.

“From what I have been told by the families, this year the first half of 2020 had more dates suitable for weddings. Hence, that is why people are rushing for the ceremonies despite the pandemic,” Chauhan noted.

India’s central and state governments have been resorting to constant patrolling and even drone-based surveillance to ensure no mass gatherings take place.

Authorities including Prime Minister Narendra Modi have urged citizens to show a sense of responsibility towards their own safety and the well-being of others. The importance of masks and gloves are also being flagged.

But despite all these measures, some of India’s largest COVID-19 community outbreaks have originated from weddings.

Rakesh Ayachi, the Additional Commissioner of the Municipal Corporation of Jabalpur, landed in legal trouble after he organised a reception for his daughter’s wedding.

Nearly 250-300 people from the small town flocked to the reception venue and more than 21 attendees reportedly contracted COVID-19 from the gathering.

#CoronavirusOutbreak from a #wedding in #Jabalpur.

Here is what city collector had to say about it. pic.twitter.com/5O89eZbpCe

Earlier in July, a wedding in Patna resulted in the death of the groom and the infection of over 100 guests.

The groom, who was a software engineer had a fever. Despite this, his family allegedly asked him to take paracetamol and go ahead with the ceremony. After the news broke on social media, a section of netizens said they would “forever remember” this infamous incident as the “Corona Wedding”.

“In such cases, the attendees are not slapped with legal orders because it’s not really possible for them to know how many people will be attending,” a senior Delhi Police official told Sputnik.

“The venue owner and the host of the parties however, could stare at serious legal consequences,” the official said.

Initially, the trend of “virtual weddings” was impressively observed in many parts of India. It allowed guests to join the bride and groom via video conferencing as the couple tied the nuptial knot in one of their living rooms in the presence of a priest and their parents only. Some long distance couples also got married online from their respective cities.

The government also recently allowed up to 50 people to be part of a wedding ceremony.

According to the data provided by India's federal Health and Family Welfare Ministry, the total recorded number of COVID-19 cases has reached 936,181 with 319,840 active cases. A total of 592,032 patients have recovered or been discharged, while 24,309 have died.