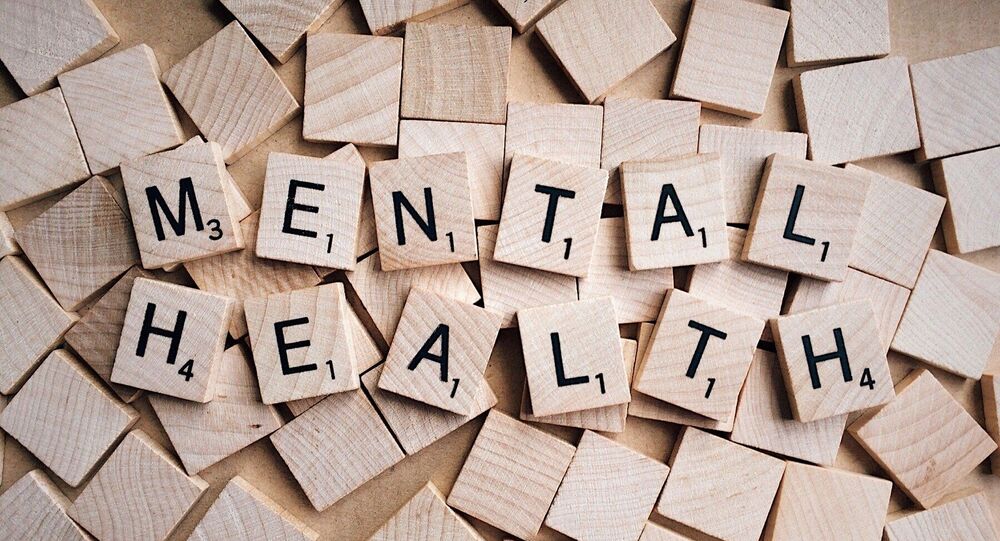 New Delhi (Sputnik): The death by suicide of budding and well-known Bollywood actor Sushant Singh, who was reportedly battling depression, has triggered an important dialogue on mental health in India. Soon after, social media posts inviting people to open their hearts were ubiquitous, along with sharing helplines to reach out for therapy.

India, a close-knit and community-oriented society, has been labelled by the World Health Organisation as the most depressed country in the world. Most of the time, mental stress is brushed aside as "mood swings''. Therefore, the importance of reaching out for help cannot be stressed enough, along with the necessary destigamatisation of therapy and medications.

Sumit Mittal, founder and CEO of VentAllOut, a vernacular platform to promote mental wellness, tells Sputnik that "people don't communicate" is a popular phrase in India, where people tend to limit their interaction with the outer world.

"Seeking help from outsiders is not considered appropriate for the risk of being judged, societal pressures, or community bias in India. It is because of this that a lot of people don't get the help required at the right time", Sumit said.

Many patients who have sought help in the past spoke about their experiences with Sputnik, highlighting how their families, especially those of females, have asked them to refrain from talking about their therapy sessions and mental health on social media or with friends, claiming that society would think of them as persons with "mental illness" - a stigma.

The patients pointed out how they face judgment and personal remarks from psychologists during therapy, which prevents them from seeking professional help in the future. Experts point out that this should not be the case.

A female journalist who did not want to be named shared how her therapy felt more like a punishment and triggered her anxiety further. However, finding the right therapist helped her.

"My therapist would ask me to write about myself and how I feel on a piece of paper. Later on, while going through it, she would chide me for getting the answers wrong. I stopped the therapy and eventually found a therapist who could comfort me in distress", she said.

Sana Khullar, a consultant psychologist, told Sputnik that there is no space for judgement in therapy and therefore one needs to ensure that one’s therapist is someone who makes him or her feel comfortable and safe.

"If a said professional starts to tell you how you feel or directly tells you what to do; find a new one. No one can brush off or disregard your subjective experience. Try meeting a few people and decide who works for you best", she said.

A WHO report has pointed out that 7.5 percent of India's population suffers from some form of mental disorder and predicted that nearly 20 percent of the population in India would suffer from a mental illness. There have also been reports of a spike in cases of mental health issues due to the pandemic and the lockdown.

How Can You Be Equipped to Help

How many times have you found yourself incapable of offering an appropriate response when a distressed friend or kin opens up to you? Due to the lack of awareness and training among Indian adults to handle such situations, psychologists say that it could be challenging for people to encounter someone who is in distress and needs help.

Explaining how to handle such situations, Sumit points out, "If one thinks that he or she is not equipped to handle such a situation, they can make sure to first comfort the person by giving a full ear without showing the inability and then seek to make a warm pass to someone you may know who could handle this situation, be it your doctor, friend or a psychologist."

In a small sample survey of 35 people, most of the youngsters who shared mental health counselling helplines after being jolted by the untimely demise of Bollywood actor Sushant Singh denied having saved one in their contact list. Most of the posts also invited people to vent out and pour their hearts into DMs to seek support.

Sana points out that in Indian society, it is common to tell someone feeling persistently sad to "stop feeling sad or get out of it" - a response she deems inappropriate.

"A distressed person can hear people saying that listen I am here for you, but is not able to accept that support at that moment. Therefore, there is a need to emphasise on it and assure that you actually mean it".

How Accessible Are Mental Resources in India

As per the budget, the Indian government has not increased the allocation to the National Mental Health Programme. The allocation of funds declined to INR 40 crore ($5.2 million) from INR 50 crore ($6.7 million) in FY18. In FY2020, despite a 7 percent increase in total health budget, only 0.05 percent of it was dedicated to mental health.

The cost of therapy sessions also starts from $13.14 (INR 1000) and can go up to $39.43 (INR 2,000-3,000) per session, depending on the experience of a psychologist. However, with increasing access to the Internet, and currently due to the pandemic, several professionals are offering help for free through their Instagram and YouTube channels or at subsidised rates.