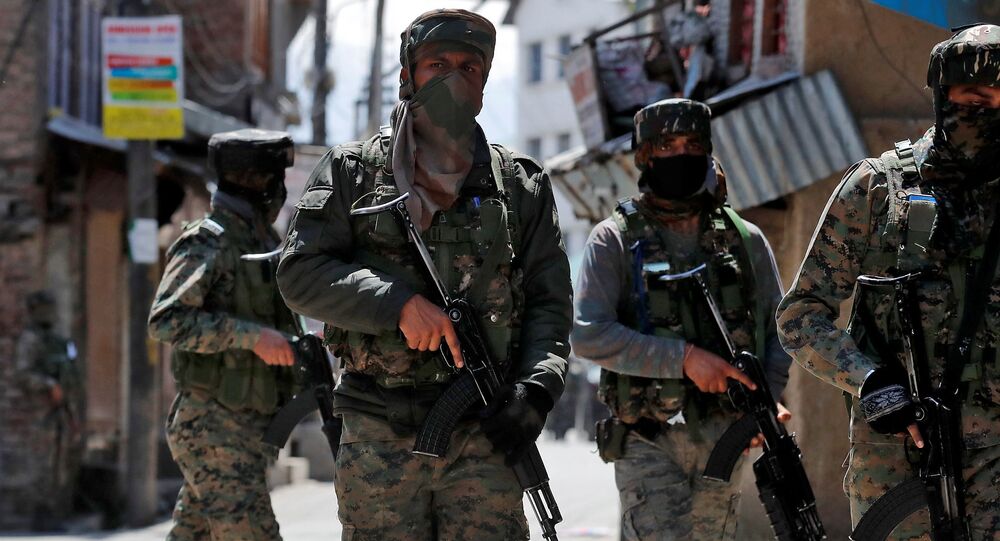 New Delhi (Sputnik): Indian-administered Kashmir has been witnessing gunfire with militants for the past 10 days in the Pulwama district. Pulwama also witnessed one of the deadliest terror attacks in February, 2019, after a suicide bomber rammed a vehicle laden with improvised explosive devices into a convoy of buses, killing 40 soldiers.

Three terrorists were killed in gunfire with security forces on Tuesday in Shopian, in South Kashmir’s Pulwama district. According to the Indian Army, a joint operation with Jammu and Kashmir police was launched in the early hours in the Turkawangam area of Shopian on Tuesday based on specific reports.

​The army said that two AK-47 rifles and 1 INSAS assault rifle have been recovered, while the operation is continuing.

​Shopian, known as the ‘Apple Town’ of Kashmir, has witnessed regular gunfire between militants and security forces. In June alone an estimated 17 militants have been killed in in the area.

India and Pakistan have been locked in a territorial conflict over Kashmir since both the countries gained their freedom from colonial British rule in 1947. India claims that Pakistan supports militancy to foment trouble in the region - an allegation Islamabad has repeatedly denied.

Tensions between the two countries has been boiling since the Pulwama terror attack, and escalated in August 2019, when New Delhi stripped the special status of Jammu and Kashmir, causing Islamabad to shutter diplomatic, communication and trade ties with New Delhi.

According to official sources on the Indian side, Pakistan has violated the existing ceasefire agreement over 2,000 times up to June 10, with the highest number of violations taking place in March.