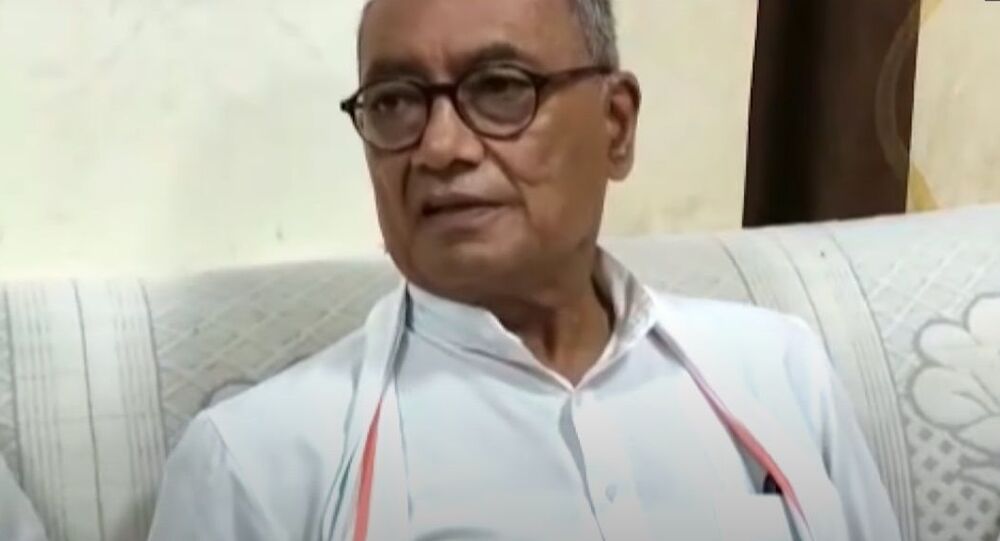 New Delhi (Sputnik): The audio and video files circulating on social media have created political turmoil ahead of crucial by-elections with 24 legislature seats up for grabs. The elections hold immense significance as they will be instrumental in deciding the state government' future.

In a now deleted tweet the nine second video allegedly showed the state chief as suggesting, "Ensure there is so much liquor all around so that people remain under its influence."

Madhya Pradesh Police registered a complaint against Congress veteran Digvijaya Singh and 11 others on Monday for allegedly posting the “edited” video online.

Singh hit back, saying that the police should also investigate the source of the video and who “edited” it. On Sunday night, leaders of the ruling BJP submitted a complaint to the police, demanding that Singh be booked for tweeting the “edited” video.

“The 2.19-minute video was edited and a nine-second part of it was shared on Twitter by Digvijaya Singh to malign the image of the chief minister”, they said.

Police said screenshots of Digvijaya’s post have been shared with them.

“The matter of editing an old video of State Chief Chouhan and circulating it on social media with an aim to spoil his image has been taken seriously. The case has been registered under the Cyber Act and it is being investigated,” said a police officer in Bhopal.

Recently several audio clips of BJP politicians have gone viral, including some in which they are allegedly talking about bribery and toppling Kamal Nath’s Congress government.

In March, the unexpected switch of Jyotiraditya Scindia from Congress party to the BJP initiated a spree of lawmaker resignations that eventually toppled the 14 month old Kamal Nath-led Congress government in Madhya Pradesh.