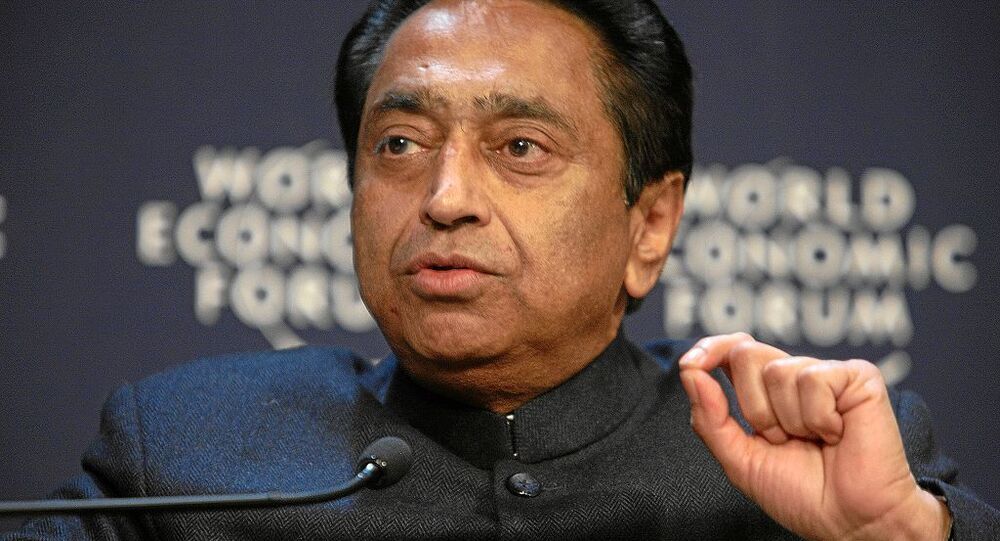 New Delhi (Sputnik): The government in India’s Madhya Pradesh state, headed by Kamal Nath from the Congress Party, was reduced to a minority in the legislature when a senior functionary – Jyotiraditya Scindia – left the party along with 22 colleagues.

The chief of the Indian state of Madhya Pradesh, Kamal Nath, resigned hours before a trust vote to prove his majority in the state legislature on Friday.

The chief minister submitted his resignation to Governor Lalji Tandon, saying "Whatever that has happened in Madhya Pradesh during the last two weeks, was a new chapter in devaluation of democratic principles".

After 22 legislators supporting Jyotiraditya Scindia deserted Kamal Nath, six of them submitted their resignation from the legislative assembly, while 16 were holed up in a hotel in the southern city of Bengaluru.

The Congress Party alleged that the legislators were taken against their wish and kept forcibly in Bengaluru by the federal governing Bharatiya Janata Party (BJP). The BJP, however, denied the allegations.

The state governor asked the chief minister to seek a vote of confidence in the state legislature after he was "prima facie satisfied" that the Congress government had lost its majority. But when the house was convened on Monday, 16 March for a budget session, the legislative assembly speaker adjourned the house after the customary address of the state governor, citing the "coronavirus spread".

The BJP, on the other hand, approached the Supreme Court of India seeking an immediate floor test for the chief Kamal Nath-led Congress government to prove its majority in the legislative assembly.

On Thursday, the apex court ordered a floor test to be held before 1700 hrs IST on Friday to prove the majority of the Kamal Nath-led government. The chief, however, decided to quit before facing the state legislature.

"How a democratically-elected government was brought down by the BJP who lured a power-hungry, ambitious 'Maharaj' (Jyotiraditya Scindia) rejected by voters and 22 greedy MLAs influenced by him", said Kamal Nath at the press conference on Friday.

In the 230-member legislative assembly, Congress had 114 members, while the BJP had 107 and the rest were independent members.

If the governor invites the BJP, now the largest group in the legislative assembly, it will form a government. The BJP previously governed the state for three terms, headed by Shivraj Singh Chauhan.